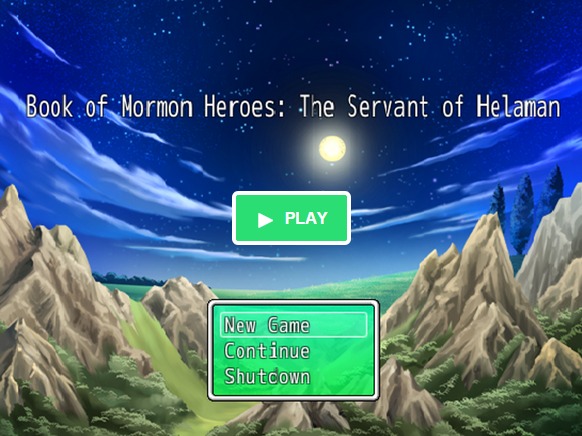 Thanks to LDS Media Talk for finding this great project!

At 13 years old, Latter-day Saint Levi Hilton is doing something not many deacons do--he's creating a computer game. And it's not just any computer game: it's one that is based on Book of Mormon stories.

Titled Book of Mormon Heroes: The Servant of Helaman, the game has you go on quests as the servant of Helaman. With Kishkumen and the Gadianton Robbers at large, it is your job to foil the robbers' plans to assassinate Chief Judge Helaman.

Hilton explains on his Kickstarter that he took on the project to create clean and educational entertainment. "This game has gospel messages, and your kids won't need to worry about any inappropriate ads or content." To reinforce gospel learning in gameplay, he goes on, "Some of the clues in the game need the scriptures to be figured out."

The game is also filled with references to Book of Mormon culture and context. "The world map is based on the description of where the cities are listed as being in the Book of Mormon," Hilton explains. "And the type of money used is the same as in the scriptures. There are also many other different references."

The careful research and accuracy was necessary, Hilton says, because "one of the things I want this game to do is make people feel that the Book of Mormon is real. Most people don't know about the servant of Helaman and how exciting the story is. I am trying to make a game that follows the story in the scriptures."

The game will be available for Windows computers only.

At the time of publication, Hilton had raised $488 of his $750 goal. He plans to make the game free for everyone once he has reached his Kickstarter goals.

See Book of Mormon Heroes: The Servant of Helaman on Kickstarter