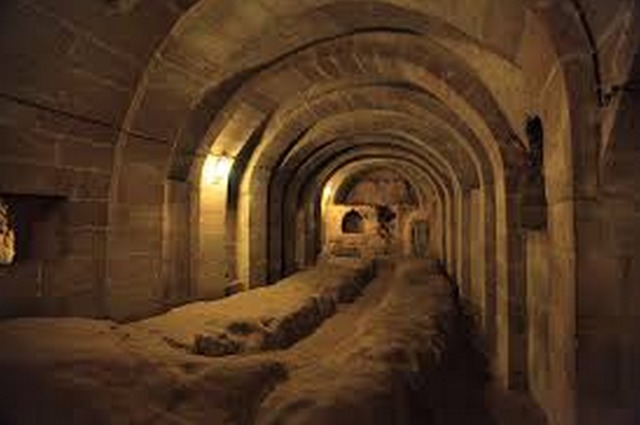 What I Learned In a Church 8 Stories Below Ground

MR says: What an ironic place to learn how to bring your faith "above ground" and into the public light.

Deep in the heart of Turkey lies a magical place known as Cappadocia, one of the most awe-inspiring sites my husband and I have ever laid eyes on. Before the time of Christ, an ancient civilization carved out nearly 200 underground cities throughout this region, easily rivaling the set of any Indiana Jones movie. It was incredible!

By the 4th century A.D., these magnificent cities were inhabited by early Christians who were forced to flee underground for protection from violent religious persecution from the Romans. Some of these elaborate and sophisticated cities go eighteen stories below the surface of the earth and boast numerous tunnels, stables, residences, halls, churches, meeting rooms, wells, and passages connecting various cities together. There are churches carved into caves with their walls and ceilings adorned with colorful, detailed biblical frescoes. These underground cities, supporting as many as 20,000 people, protected their citizens from religious persecution and attacks threatening their lives. Archaeologists and historians say that the early Christians tried to defend and protect themselves by using large round stone doors to cover the entrances, complicated maze systems, and even holes in the ceilings which were used to pour hot oil over intruders.

My husband and I were fascinated with the stories told about these faithful early Christians. At one point we arrived at a church eight stories below the surface of the earth. Upon viewing the church, one woman in our group loudly exclaimed, “Why on earth would these people go to all the trouble? Why did they even bother?” I turned and answered her with the first thought that came into my mind, “I really think it’s because they believed in their religion, and their faith caused them to act.”

Similarly, the writer of the book of Hebrews says: “And what shall I more say [of them]? [They] who . . . quenched the violence of fire, escaped the edge of the sword, . . . waxed valiant in fight, turned [armies] to flight . . . They were stoned, . . . were sawn asunder, were tempted, were slain with the sword: . . . wandered about in sheepskins and goatskins; being destitute, afflicted, [and] tormented; ([They] of whom the world was not worthy) . . . wandered in deserts, and in mountains, and in dens and caves of the earth.” (Hebrews 11:32-38.)