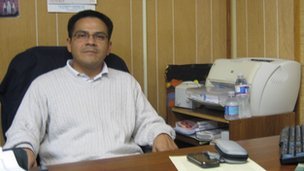 Will Hispanic Mormons support Romney in 2012?

As Mitt Romney remains a front-runner for the 2012 Republican presidential nomination, his Mormon faith has come under increased scrutiny.

But one aspect of the Mormon community's changing face has passed mostly unnoticed: a rapid growth of conversions by Hispanic immigrants.

According to some estimates, by 2025 Hispanics will be the majority within the Mormon faith, which has expanded from its original core of largely white members located mostly in Utah.
Read the rest of this story at bbc.co.uk