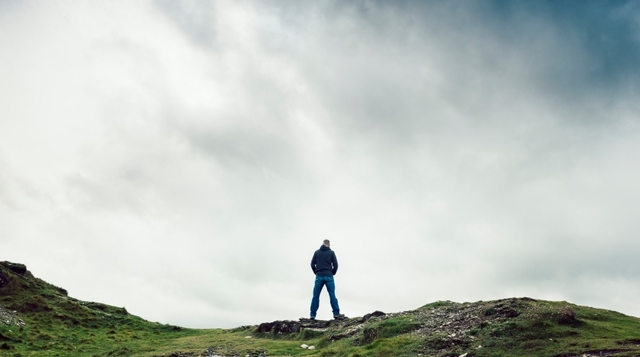 It was a blistering hot day in NYC.

I was 23 and had graduated from BYU two months earlier. Now I was nearing the end of my summer internship at a very fast-paced advertising agency.

From my apartment window, I looked out over the Hudson River where a city that shimmered with opportunity lay before me. The whole world was looking bright, but inside, I felt…cloudy.

I wasn’t sure where to live after my internship, what to do for work, and worst of all, I went from having a huge support system in Utah where everyone encouraged me to choose the right and where gospel conversations were a norm, to a bustling city where my thoughts rarely fell on the gospel. And when they did, it was mainly questions about Church history. I began doubting whether or not I believed in the Church anymore.

But how could I—someone who prayed every day, hadn’t skipped a day of reading my scriptures since I was 15—have doubts? In my mind, doubts were for those people who had serious struggles in life or who chose paths that took them away from the Church—not for an active returned missionary like me. Right?

It was at this time of great confusion that my friend called me from the airport, en route to his mission. After a few minutes of talking he said, “Zack, you don’t sound good.”

I broke down and for the first time admitted my doubts out loud. I expressed my frustration that I was praying, reading the scriptures, and doing everything I was supposed to do, but just felt nothing.

He listened, thought, and then said, “…but are you doing them the right way?”

He proceeded to share a thought similar to President Dieter F. Uchtdorf, who said, “I wonder if our organizational and personal goals are sometimes the modern equivalent of a Potemkin [imaginary] village. Do they look impressive from a distance but fail to address the real needs?” (“On Being Genuine,” April 2015 general conference).

I was a thirsty man lifting up a goblet of cool water, but never actually opening my mouth to allow myself to be refreshed and filled.

I was doing what I was supposed to, but I was choosing to not get anything out of it.

So how do you lose a testimony while staying active? It’s simple:

1) If you stop listening when you pray.

From the time I was 15, at the end of every nightly prayer I would ask, “Is there anything Thou wouldst have me know or do?” And then I would wait…wait until I received an answer. Sometimes 30 seconds, sometimes a couple of minutes. When my doubts reached a climax, I realized it had been months since I had done that.

2) If you don’t make an effort to learn when you read the scriptures.

3) If you think you’re checking all your boxes.

The worst part about my struggle was that I told myself that I was doing everything right. The self-righteous ‘pats on my back’ echoed a similar sentiment of “all is well.” I didn’t ask the Lord in my monthly fasts “Lord, is it I?” as I had usually done, and it affected my faith

While preventing these attitudes sounds simple, sometimes kids, a job, marriage, dating, bills, hobbies, and everything else interferes with our efforts and it is hard to keep our faith as active as our habits. But the key is to want that connection to heaven and to give it a chance.

And while it might not come all at once, once your heart is in it, the doubts diminish, the joy increases, and you can find yourself actively engaged with a stronger testimony than you had before.

Zack Oates is an entrepreneur, newly minted husband, hot tubber, and blogger (but not in that order, necessarily). He lived in Ukraine for two years serving an LDS mission and started a nonprofit in 2008 called Courage to Hope, which works with victims of domestic violence. After working at an ad agency in NYC, he founded his first company. Four years later, he sold that startup and returned to BYU for his MBA. He has been a founder of five other startups, rung the NASDAQ bell, has been to 30 countries across 6 continents and currently lives in Dallas with his wife working as a business consultant for fortune 50 companies. Check out his blog, bowlofoates.com.