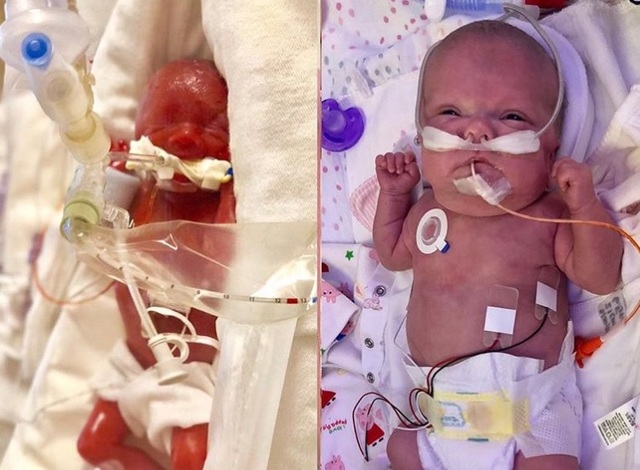 "A medical marvel," that's what Cosmopolitan is calling Grace Parkinson, who is only 3 months old.

On New Year's Eve, Grace was born after her mother had been pregnant just 23 weeks. While weighing in at only one pound at birth, Grace is now five pounds and her family has been chronicling her miraculous transformation on Instagram.

#TBT to our first family photo and the day this world became perfect. While I wish with all my heart I could have stayed pregnant longer, it was definitely the best (and craziest) New Years Eve we could imagine. This was about an hour after she was born and the most unexpected labor I could have imagined. I’m working on some blog posts about my pregnancy and birth story so hopefully I will get those up soon! * #birthdaygirl #23weeker #newyearseve #newyearsevebaby #firstfamilyphoto #family #familiesareforever #premie #miraclebaby #inlove #nicuwarrior #familiesareforever #pray #preemie #preemiebaby #preemiemom #preemiepower #preemiestrong #nicu #nicuwarrior #nicubaby #nicumom #niculife #nicu #love #cute #babygirl #ourlittlepreemie #rainbowbaby #prematurebaby

While news organizations like The Independent, Cosmopolitan, and Women's Health have written articles featuring Grace and the incredible odds she fights daily to survive, her parents recently shared the faith-filled story behind their daughter's life with LDS Living.

"She has been such a blessing in our life thanks to Heavenly Father," Mary Parkinson says.

About how tiny Grace got her name, Mary explains, "She is partly named after her aunt and other family members, but mostly she is named Grace because it is only by the grace of God that she is here. I have lost count of all the times I was told my baby would die."

After Mary experienced complications during her pregnancy, she would go in for weekly and sometimes twice-weekly doctor appointments, hoping to hear good news. "As my condition became more severe, I was reminded that she may not be alive the next week," Mary says. "Every appointment the doctors, my husband, and I would collectively hold our breaths hoping to see that heartbeat; and every week we did."

Mary continues, "When the contractions started at 23 weeks, we were told she only had a four percent chance of surviving birth. But she did. . . .  The only way she is still with us is through Heavenly Father's mercy."

This beautiful little girl joined the world on New Years Eve and has been fight the odds ever since. I’ll be trying to post updates about our little Grace as often as possible. But she is a fighter and we are so proud to be her parents! #23weeker #preemie #preemiebaby #preemiemom #preemiepower #preemiestrong #preemie #nicu #nicuwarrior #nicubaby #nicumom #niculife #nicu #love #cute #babygirl #colourfulbeginnings

Grace gave us a wonderful surprise yesterday by opening her eyes! Now sometimes when I talk to her she opens them and looks at me! Even if it is just for a moment she lets me know she knows her mama’s voice 😍 #premie #23weeker #miraclebaby #inlove #nicuwarrior #familiesareforever #pray #preemie #preemiebaby #preemiemom #preemiepower #preemiestrong #nicu #nicuwarrior #nicubaby #nicumom #niculife #nicu #love #cute #babygirl #colourfulbeginnings #ourlittlepreemie #rainbowbaby

Sustained by faith, Grace's family has felt the power of heaven helping and comforting them, even during the most trying times. Grace's father, Zac, has given his daughter priesthood blessings throughout her young life. About these sacred experiences, Zac says, "I can’t remember a single word that I said during any of the numerous blessings that Grace was given, but I do remember the briefest feeling of peace. It wasn’t a feeling that necessarily everything was going to be perfect but that in the end everything will work out and that eventually we will understand why this is happening. Once the blessings ended, the weight of Grace's situation came flooding back, but the memory of the feeling of peace helped to sustain me through those hard times."

Grace's journey has been filled with uncertainty, complications, and pain along with continual faith and prayers from her family.

The bad days in the NICU come fast and hit us like a ton of bricks. What started as a good day with Grace on a new breathing apparatus and doing great, quickly took a turn. Doctors did a routine X-Ray of her belly and within 2 minutes the Attending doctor was in Grace’s room telling me she had a perforated bowel. Within 40 minutes of the X-ray she had an emergency re-intubation and surgical procedure to put a vent in her belly, allowing the bowel air and substances to drain. Nothing is scarier than seeing your baby surrounded by concerned looking neonatologists and pediatric surgeons. Thankfully we are now a few days post-surgery and she is doing much better than the doctors had hoped. We now have a more difficult road to recovery but our little girl is a fighter ❤️💪🏻 Thank you everyone for your thoughts and prayers! * #premie #23weeker #miraclebaby #inlove #nicuwarrior #familiesareforever #pray #preemie #preemiebaby #preemiemom #preemiepower #preemiestrong #nicu #nicuwarrior #nicubaby #nicumom #niculife #nicu #love #cute #babygirl #colourfulbeginnings #ourlittlepreemie #rainbowbaby #prematurebaby

Grace is getting yet another blood transfusion. She has had so many in her few weeks of life I have lost count. Just hours after she was born, our NICU had her dad sign a consent form for any blood transfusions she may need. We assumed this was just protocol, but very soon it was clear Grace was going to need it. It seems every few days she becomes anemic and doctors are forced to give her more blood. Though we have been told it’s very common for micro preemies, it’s still scary to see that IV hooked up to my tiny baby’s head. * #bloodtransfusion #preemieproblems #premie #23weeker #miraclebaby #inlove #nicuwarrior #familiesareforever #pray #preemie #preemiebaby #preemiemom #preemiepower #preemiestrong #nicu #nicuwarrior #nicubaby #nicumom #niculife #nicu #love #cute #babygirl #colourfulbeginnings #ourlittlepreemie #rainbowbaby #prematurebaby

3 surgeries in one week. Grace had run out of good veins for her IV so doctors were forced to give her surgery to place a more permeant IV in her chest; the additional procedures were to adjust the catheter and get it in the perfect location. While we are happy to have a reliable IV to get Grace all the nutrients she needs, it was so hard to see her after each surgery, completely limp from the pain and paralytic medications. After the last surgery her dad and I walked into the room and as we spoke to her, she popped her eyes wide open. She was so happy to hear our voices.😍 Hopefully we are done with surgeries and Grace will have some time to recuperate. Thankfully, she is recovering well and today has been a good day! * #premie #23weeker #miraclebaby #inlove #nicuwarrior #familiesareforever #pray #preemie #preemiebaby #preemiemom #preemiepower #preemiestrong #nicu #nicuwarrior #nicubaby #nicumom #niculife #nicu #love #cute #babygirl #colourfulbeginnings #ourlittlepreemie #rainbowbaby #prematurebaby

One particularly difficult night when Grace was two weeks old, Mary noticed Grace "started to have labored breathing and was very clearly in distress." The nursing staff thought these changes were because Grace's recent diaper change had upset her—a common occurrence for premature babies, according to Mary. "But something was wrong; something inside me was saying this was more than her being irritated. I felt prompted to ask the nurse to get the nurse practitioner," Mary says. "That was the beginning of the longest night we have had in the NICU."

The nurse practitioner ran tests on Grace and started her on antibiotics, thinking an infection could be the cause of the recent changes. "As the hours went on Grace's oxygen requirement kept going up and our nurse stood all night holding and comforting Grace as she suffered. I slept by her bedside and prayed for understanding of what was happening to my little girl. The next morning it was confirmed that she had an E. coli infection. . . . If I had not listened to the Spirit, her infection could have gotten much worse," Mary attests.

Despite the sleepless nights and agonizing worry Grace's family has endured, Zac is quick to recognize the light that floods their lives. "We have had so many people from our stake, as well as our nonmember family and friends, reach out and support us. Seeing so many people striving to follow the example of Christ by serving us has been humbling and really helped to strengthen my faith."

Mary adds, "Our faith has helped us in every way possible. Every night we say our family prayers before we leave the hospital. It gives us a small moment of calm before we have to go home without her, yet again. One day she will be able to walk out those doors with us, but until then we are blessed by the power of prayer and patience."

Mormon Life Birth MiracleBirth,Miracle,Mormon Life
Comments and feedback can be sent to feedback@ldsliving.com