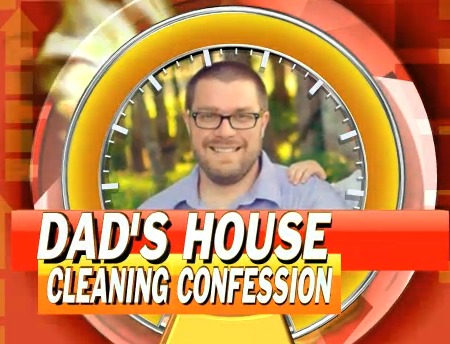 This morning, Clint Edwards and his family were featured on Good Morning America, after Edwards’s article, “I blamed my wife for our messy house, I was wrong for many reasons” went viral online.
ABC News | More ABC News Videos

We got the chance to talk with Edwards about being on the show, about how his faith has shaped his marriage, and about how he almost wishes his story hadn't gone viral.

What was it like being filmed and interviewed at your house?

They called me at 8:00am and they asked if I wanted to be on Good Morning America. I’m said, "Well, sure! When is it gonna air?" And they said, "Well, we’re going to come over to your house today.’ I said, ‘Oh! When are you gonna run it?" They said, "Tomorrow." So it happened really, really fast.

And you know it was cool but kind of scary at the same time. We had a camera man at our house for like four hours following the kids around. I have to give huge props to my wife. She's the kind of person that gets terrified to give a talk in sacrament meeting, and a lot of the time she’ll just say that she won’t do it because it’s so scary to her. But she got in front of that camera and she threw down! I was so amazed by it. And when I asked her why she did it, she said "Because I love you." It was awesome to have her say that and for her to support me.

Did your kids enjoy being filmed?

My daughter loved it. She’s five and she thought it was awesome. It was difficult to get her out of the camera. But my son, who’s really camera shy, all he would say as we were coming up to it was, "Do I have to be on TV?" My mother-in-law ended up bribing him with Legos to get him on screen. And once that happened, he was so excited, but he also started doing really weird stuff. Like he started throwing things at the walls, and he started digging a hole in the yard in front of the cameras. I think our baby, Ashton, who’s three months, was probably the best behaved.

Did you expect your story to go viral like that?

You know in a lot of ways I wish it hadn’t. I’ll tell you why. I wrote it on paternity leave at McDonald’s at 6:00am because I live in a small town and it’s the only place that’s open. When I finished it, I thought, "Well, this is okay." I posted it on my blog and nobody cared. It wasn’t until we shared it that people started getting excited, and even when I submitted it to the editor of Washington Post, who’s gotten to be a friend of mine, she said, "Yeah, it’s okay." I don’t think she was blown away by it. But it really took off, and in a lot of ways I kind of wish it hadn’t. Mainly because I’d like to think that we’ve moved past this now as a society. I really liked what Good Morning America had to say, and I’m really glad that it was positive, but at the same time it felt like a conversation right out of the 50s. I don’t think that’s a real representation of my piece or what I feel about marriage. I mean, I’m a big advocate of marriage as a partnership. It’s not a list of duties or obligations. It’s two people working together.

So how has your faith affected that opinion?

I think my faith has reinforced it. We were married in the temple--Mount Timpanogos--and we’re commanded to cleave unto each other. I think we definitely have. My blog is titled "I Have No Idea What I’m Doing" and that’s funny and kind of tongue-in-cheek, but it’s mostly because my father wasn’t around when I was a kid. He left when I was nine and he was in and out of jail. He died when I was nineteen from drug addiction. I feel like I have no idea what I’m doing because I didn’t have a father in my life. And I think the Church was very good about helping me find surrogate fathers and showing me an example of what a good marriage can look like, seeing the people in the ward and a lot of the people I grew up with--scout masters, home teachers, that sort of stuff.

I would just tell them that marriage is a partnership and that it’s not one duty or another. It’s our house. They're our kids. It’s our budget. It’s our yard. All of it is ours. It’s not a list of duties or a checklist--you do this and I’ll do that. It’s two people putting their shoulder to the wheel, not just one.

Hopefully this advice helps. I think the Mormon Church teaches this, and I think a lot of men understand it and I think a lot of women understand it. But obviously, the fact that this thing went viral shows that there are a lot of people that wanted or needed to hear it. And I don’t know what that exactly says, but I’ve had a lot of married men and women e-mail me and say that I solved a 20-year argument for them! Or say, "This is why we got divorced." So obviously I touched on something when I was writing in McDonalds at 6:00am.

-->Click here to read Edwards' viral article, and be sure to check out his blog, "No Idea What I'm Doing: A Daddy Blog" at byclintedwards.com.