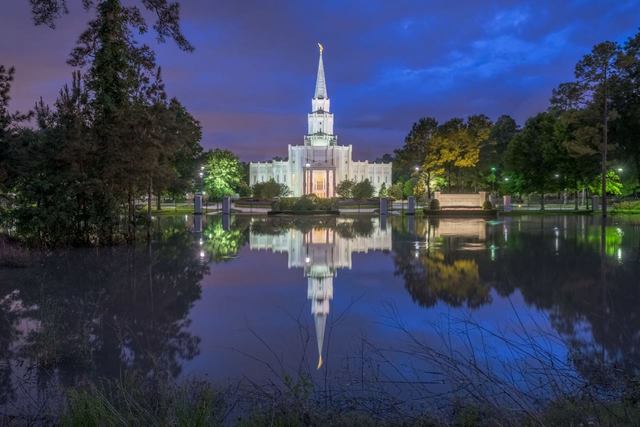 What an exciting story from the Houston Chronicle highlighting the miraculous protection of the Houston Temple in the recent flooding as well as other times temples have miraculously weathered natural disasters and remained untouched.

They share, "While the Houston Temple remained closed to protect the safety of temple workers and patrons, the temple stood as a beacon of hope and holiness, spared by God’s hand."

Many Houstonians were awakened in the wee hours of April 18, 2016, to  a severe thunderstorm. This storm made it impossible to sleep and came complete with booming thunder, blinding lightning, fast wind and fat raindrops hitting like marbles dropped on rooftops and against windows.

When I looked out my second-story window at three a.m, I noticed my flooded street with water over the curb and halfway up my front yard. Later when I heard on the news that we had received 15 inches of rain in less than 24 hours, I wasn’t surprised. Yet what did surprise me was seeing the many photos on Facebook and Instagram of the Houston LDS temple.

Located on the corner of Cypresswood and Champion Forest Dr., in Klein, (just north of Houston) the streets around the temple looked like a river, virtually impassable from all directions. While the temple grounds were flooded, the sidewalks around the temple were visible and dry.