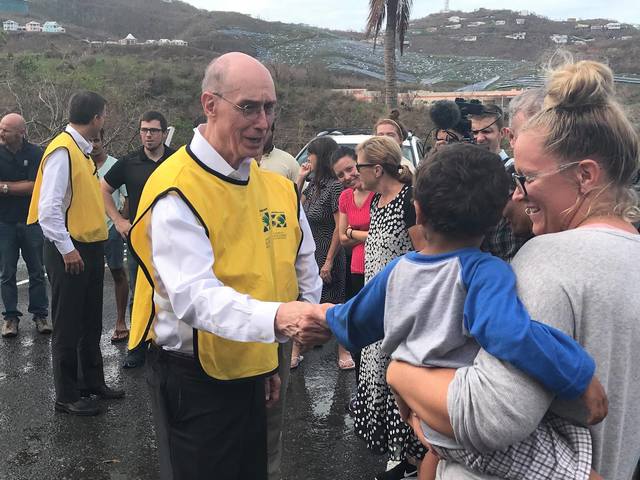 When the Teton Dam broke while President Henry B. Eyring was serving as the president of Ricks College, he and his wife could not immediately return home and they had no way of knowing whether their four sons had survived. Because of that terrifying experience, President Eyring had a powerful message to share with those devastated by Hurricane Irma he learned from experience: “God will protect you,” President Eyring said. “The main thing for you to do is to do what is right. Serve others — and whatever the outcome, it will be all right.”

It’s a busy time for President Henry B. Eyring.

The first counselor in the First Presidency of The Church of Jesus Christ of Latter-day Saints will play a key role in the faith's upcoming general conference in a couple of weeks. And early next week he’ll be in Rexburg, Idaho, for the inauguration ceremony of his son, Henry J. Eyring, the new president of BYU-Idaho.

No matter. After speaking Friday to a standing-room-only audience at the San Juan Puerto Rico Stake Center, President Eyring told the Deseret News that making time to visit the Hurricane Irma-weary Caribbean was an easy decision.

“I felt the Lord wanted me here,” he said as night fell on a busy, steamy day that included visits to damaged areas in San Juan and the Caribbean island of St. Thomas.