The terrorist attacks at two Muslim mosques in Christchurch, New Zealand, on Friday, March 15, 2019, resulted in the hospitalization of 39 and death of 50 innocent Muslim men, women, and children. This act has been described by our prime minister as “forever a day etched in our collective memories. . . . That quiet Friday afternoon has become our darkest of days” (New Zealand Herald, 2019).

Since then, there have been expressions of anger, rage, and disbelief throughout Christchurch and the nation among Muslim and non-Muslim alike. However, there has also been an outpouring of Roimata (tears), Manaaki (caring), and Aroha (love) to those affected by this act of hate. I want to take this opportunity to share with you my thoughts and feelings.

Hearing the stories of fight and flight from war-torn countries and realizing that my country was helping make a safe haven for refugee friends and families made me feel grateful for my many blessings. This experience also opened my eyes to the experiences and trials for our refugee whānau (family) entering New Zealand for the promise of a safe life. This is where I had time to consider the resilience of refugees.

This is my friend Zainab; she's married to Mohammed. They have five children and she is pregnant with their sixth child. They relocated from Syria to New Zealand as refugees in 2018. They are Muslim. 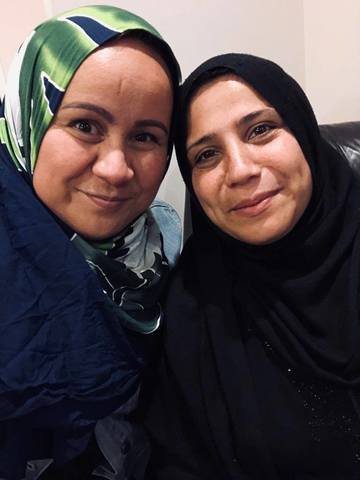 I met her and her whānau only a few weeks after they left the Mangere Refugee Resettlement Centre to live in Hamilton, New Zealand. It was a Saturday afternoon, a friend and I were going to dinner and I saw Mohammed and his son struggling to carry bags of groceries home so we offered them a ride. I have since been visiting with them as friends.

Zainab speaks fluent Arabic and very little English. We have trouble communicating at times, but thanks to technology, we manage.

When this tragedy happened, I thought of all affected by this crime of hate. And I also thought of Zainab and her whānau. I was so angry because they had left their war-torn country to find both religious freedom and physical safety here. On that fateful day, they and all of New Zealand learned that wasn't necessarily true.

This devastated me for my Muslim friends, including this family.

“Our Muslim whānau are suffering right now because of the targeted terrorism and violence, just because of who they are . . . therein lies a deeper societal, structural and historical issue and reality around the division of the experience of people of colour in New Zealand, and white people in New Zealand" (Te Karere, 2019).

On Monday, March 18, 2019, there was an interfaith devotional held at the Temple View Stake Center in Hamilton.

President Cowley and his family invited Zainab and her family. Knowing that she had very few friends in Hamilton, I wanted to show her my support and love. I asked her to wrap my head in a headscarf like hers, to walk alongside her to this event. And what a learning experience!

I identify as a Māori daughter of God, and I noticed that for non-Muslim, they no longer saw my Māori features. I was seen as someone to feel sad for and comfort. Even people I knew personally weren’t looking at me. First, they saw the hijab, and then slowly they recognized me.

At one point during the evening, we were invited to separate men and women for our respective prayers. I walked alongside Zainab to the karakia (prayer) session. Wearing the hijab, I felt immediately welcomed and accepted by the Muslim wahine (women). At one point, I was approached to lead the prayer in one of the women prayer rooms. I politely declined, explaining that I wasn’t Muslim and that I was wearing the hijab to support Zainab. From these Muslim women, I felt strength, faith, and graceful dignity.

I didn’t anticipate that wearing the hijab to the devotional would change how people saw me, but it did, for both Muslim and non-Muslim alike. I didn't realize that by supporting my sister it would bring about such an amazing, eye-opening experience. Even Mohammed warmed more to me when I wore the scarf, and he told me to wear it to work tomorrow.

Living a life being non-Muslim and having a short experience of looking Muslim, I felt like a stranger to myself. While I can never understand the persecution and loss our Muslim brothers and sisters have endured, it offered a beautiful opportunity to stand in another’s shoes, if only for a moment.

In conclusion, this is what I learned and would invite us to consider:

1. Don't treat others like victims; they have a deep-seated strength and faith to overcome this act of terror. But, do something. Speak up against hate whenever the opportunity presents itself: be the change. We are not given only one chance but many to broaden our worldview

“There are chances for work all around just now,

“Opportunities right in our way,

“But go and do something today” (“Have I Done Any Good,” Hymns).

2. Ask yourself these self-reflective questions as we unitedly move forward:

3. Understand that “mourning with those who mourn” extends beyond our Church members to all children of God. Elder Ian S. Ardern of the Pacific Area Presidency shared that this interfaith service was "an outward demonstration of our inward commitment to mourn with those who mourn, and comfort those who stand in need of comfort. . . .We are our brother’s and our sister's keeper, and we must act accordingly."

4. Know that we can gain much from listening, loving, and considering other’s perspectives with empathy and compassion. In the end, that is what helps us to become like our Savior. While I could only walk in the shoes of another for a moment, Jesus Christ is able to understand all of our experiences, pain, and perspectives because He has felt and endured them through His infinite Atonement. We grow closer to Him as we attempt to allow His love for others to fill us.