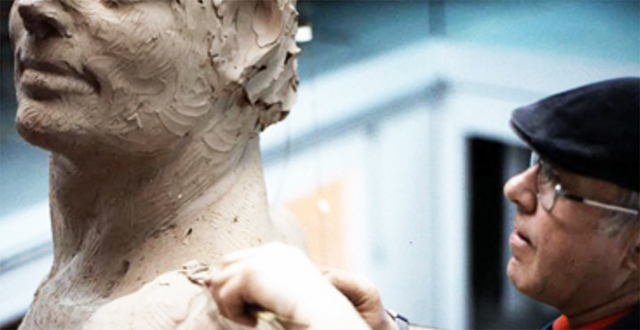 As a father, seminary teacher, and artist, Karl A. Quilter Sr. has impacted hundreds of lives through his faith and art. And though he passed away in November 2013 at age 84, his son shares some fun and touching memories of his father’s work and testimony—which still stand in the form of the angel Moroni statues atop temples across the world.

What began as a papier mâché statue at a state fair booth ultimately led a young missionary to become an accomplished sculptor, with commissioned work now found at many LDS temples. Karl Quilter Sr.’s son Karl C. Quilter Jr., who now works as the Regional Temple Facility Manager of the Church, recalls that his father was told by a prophet, “Karl, I want you to pursue this sculpturing and keep with it because one day you’re going to make a great contribution to the Church.”

Though he sculpted everything from angel Moroni statues to Nativity scenes, his name is not perhaps as recognizable. “He just worked behind the scenes and did what he could,” Quilter Jr. explains. “He wasn’t a businessman—more of an artist, making a contribution and sharing his talent.” Whether it was drawing sketches on the paper table cloths at ward dinners or helping design the oxen for temple baptismal fonts, Brother Quilter Sr. contributed a lot in his own quiet way. 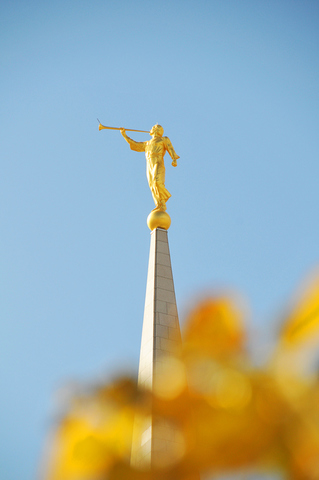 When designs for smaller temples started to emerge, a new, lighter-weight Moroni became necessary—one that could be easily shipped and installed. Quilter Sr. began designing three different Moroni statues of three different heights, working with his friend LaVar Wallgren to build it out of fiberglass.

Quilter Jr. remembers helping his father with the designing process. “Like most artists, [my dad] just took pictures and worked from the pictures,” he shares. “I remember standing on a ball—I don’t know if it was a soccer ball or basketball, but it was a ball—and then holding a football game trumpet in my mouth, striking a pose for him.”

He continues, “[My father] always commented that he liked to use the faces of people that he felt impressed to for the angel Moroni. He told me many times he’d used my face [on the 9-foot statue].”

One of the unique aspects of Brother Quilter’s angel Moroni design is that it does not hold the gold plates in its left arm. “My dad said the scriptures said that the angel flew carrying the everlasting gospel, but not all the gospel is on the gold plates. The gold plates and the Book of Mormon are just part of it,” Quilter Jr. explains. He then adds, “[My dad] said, ‘I don’t know if an angel could fly carrying those plates. It’s hard enough with the trumpet!’” This observation, combined with feedback from Church leadership that the angel should be more of a proclaiming messenger rather than a deliverer of a specific gospel, led to the angel Moroni statue design we are most familiar with today.

“I think the real highlight of his sculpting was the Nauvoo temple,” Quilter Jr. says of his father. “The First Presidency had asked him to create some options for that temple because it was unique.” Quilter Sr. came up with some designs, including the traditional angel we see on our temples today, as well as what his family has dubbed the “Super Moroni”—one more similar to the weather vane angel that originally adorned the Nauvoo temple spire. 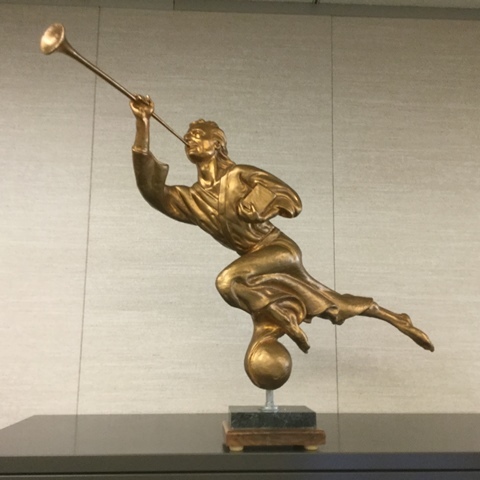 Though the designs were liked, the “Super Moroni” was deemed too futuristic and not quite the right feeling for the temple. The family continues to bronze cast small versions of this Moroni, however, like the one Quilter Jr. now keeps on his desk.

In addition to creating Moroni statues for the top of the temple, Quilter Sr. had also been commissioned for some of the inspiring holiday décor found on the temple grounds. If you’ve ever wandered around certain temple grounds during Christmas, you’ve probably seen one of Brother Quilter’s beautiful Nativity sculptures. 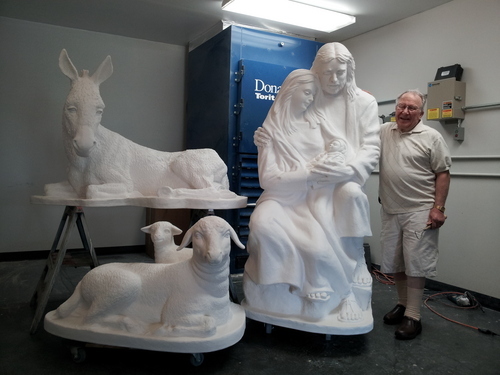 Called as a missionary for the Temple Department specifically to create a Nativity to be used exclusively for temples, he sculpted one with Mary and Joseph as one piece, and a lamb and a donkey as the two other pieces. Quilter Jr.’s younger brother Paul has carried on their father’s legacy, still casting the special Nativity sets for temple grounds through his own business and studio.

A Family of “Makers”

One of Quilter Jr.’s childhood memories is of his artistic father working on a bust of the prophet Joseph Smith in his small basement studio, using the actual death mask of the prophet, which he had received special permission to use for the project.

He also remembers a time when he had a makeshift bedroom in the basement, next to his father’s studio. After he had a nightmare and couldn’t find the light, he walked through the bamboo curtain that made up his door—straight into a half-finished bust of Brigham Young. “I just remember being completely terrified. I remember saying, ‘Dad, you’ve got to not do those things down by my bedroom!’” Quilter Jr. recalls.

But, he says, “That’s where we grew up.” With a basement full of plaster, clay, fiberglass, and resin, the Quilter children found their individual talents in a variety of trades and skills. As Quilter Jr. puts it, “We became what we call ‘makers.’ We just like to make things.”

According to Quilter Jr., his father’s talent was never meant to simply decorate a place—it was meant to have a message and inspire a special moment for the viewer. Outside of his Church-commissioned pieces, Quilter Sr. created everything from private pieces of horses or dogs to a large piece of a Native American in eagle feathers.

But Brother Quilter’s art was primarily a way for him to connect with his faith. “He always did something with a Church theme,” Quilter Jr. remembers. “He’d be reading or studying and something would come to his mind—like he has one of Joseph Smith breaking the chains when he was in prison called Majesty of the Chain.” But Quilter Jr.’s favorite sculpture of his father’s is The Shepherd, which portrays a shepherd looking out on the horizon, his dog at attention by his side, holding a lamb. 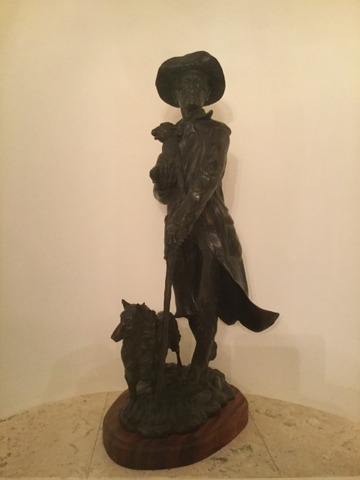 “It’s moving—it gives me the feeling that my dad felt that the Savior was our Shepherd. He has us, who are stalwart at his side, to help him, like that dog, and then He’s carrying the little lamb—those who can’t make it to safety.”

As a seminary teacher, many of the family’s family home evening lessons were Brother Quilter’s seminary lessons he wanted to practice. But it wasn’t just their father’s job that inspired the Quilter family spiritually.

“I’d have to say that my dad’s sculpturing and the religious practices in our family were such that it created very deep foundations for each of my brothers and sisters,” Quilter Jr. shares. “All eight of us served missions, we’ve all been married in the temple and sealed, we all have very strong families, and we’re all continuing a lot of the religious practices we’ve grown up with.”

Quilter Sr.’s legacy hasn’t lived on with his children alone. “My dad was a seminary teacher, and he had a gift to never forget anyone’s name, even if he had just a brief encounter with them,” Quilter Jr. says.

“To show how far-reaching that is, when I go around and do temple inspections, I’ve gone to a number of temples where a worker or someone there will see my name and go ‘Oh, I know a Karl Quilter, he was. . .,’ and I’ll reply, ‘Yeah, he was your seminary teacher, right?’ and they respond, ‘Yeah he just changed my life.”

But whether because of his father’s teaching, art, or kind personality, Quilter Jr. knows one thing is for sure: “[my dad] was loved by a lot of people.” And as Quilter Jr. travels the world inspecting temples today, he is still quick to remember, “If you look at the bottom of the angel Moroni clothing, you’ll see ‘K. Quilter’ and the year that particular piece was made—same on the Nativity. It’s kind of humbling to see that as I go around the world that my dad has touched so many people.”