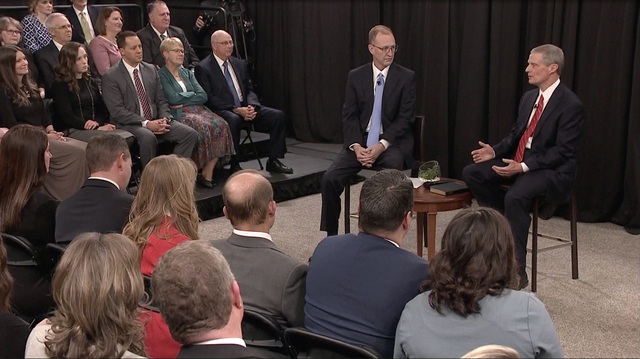 “That We May Always Have His Spirit to Be with Us”: 5 Principles of Revelation Taught by Elder Bednar and Elder Johnson

The room was filled with teachers from Seminaries and Institutes, and although Elder David A. Bednar was facilitating the discussion, he pointed to the importance of having the true teacher present.

Elder Bednar and Elder Paul V. Johnson, Commissioner of the Church Educational System (CES) shared remarks about revelation, guidance, and the influence of the Holy Ghost during a Thursday broadcast to CES Teachers, "An Evening with a General Authority."  Elder Johnson spoke first and then Chad Webb, administrator of Seminaries and Institutes of Religion, moderated a conversation with Elder Bednar and an audience of CES instructors.

Elder Bednar said that we often make it hard on ourselves to receive personal revelation and addressed ways to be more susceptible to revelation.

The Spirit Should Be Constant

Elder Bednar emphasized that moments when we feel guided by the Spirit should be the norm, not the exception.

“As we honor our covenants, we may always have the Holy Ghost to be our constant companion—but we talk about it and we treat it as if hearing the voice of the Lord through His Spirit is the rare event.”

He shared the experience of Oliver Cowdery when the Lord tells Oliver "as often as thou hast inquired thou hast received instruction of my Spirit. If it had not been so, thou wouldst not have come to the place where thou art at this time. Behold, thou knowest that thou hast inquired of me and I did enlighten thy mind" (Doctrine and Covenants 6:14-15).

The constant companionship of the Spirit is the promise.

“It ought to be with us all of the time—not every nanosecond—but . . . . if you and I are doing our best, and we’re not committing serious transgressions then we can count on the Holy Ghost guiding us," Elder Bednar says.

Sometimes we put ourselves at a disadvantage when we believe we have to follow outlined steps in order to recognize the Spirit.

“To think that somehow our daily life is divorced from that ongoing influence of the Spirit and it only comes when we gear up somehow according to the formula I think gets in the way and messes us up,” Elder Bednar said.

He shared how Nephi learned about timing through his experience with revelation. Nephi learned when he went to go get the plates the first time and was unsuccessful. It wasn’t until he went back “not knowing beforehand the things which [he] should do” that he was successful in obtaining the plates (1 Nephi 4:6).

“Heaven is in charge of this, not you, not me,” Elder Bednar said. “. . . God is not going to leave you hanging out there alone as you’re trying to succor and nurture and minister to His children. So if you do your best it will work out and you’ll learn lessons along the way.”

When asked about acting on current revelation from Church leaders, Elder Bednar shared that this revelation has not come suddenly but is the product of years of revelation.

“The things that are coming forth now have been worked on for years and decades,” Elder Bednar explained. He shared examples of President David O. McKay’s focus on families and President Gordon B. Hinckley’s focus on small temples that spanned across decades.

“Many times what to do is pretty clear but it’s the timing and the when to do that we struggle with,” Elder Bednar said. “. . . We have to wait upon the Lord. He delivers it. We don’t demand it. We have to be aware of and responsive to His timing, not our demands about timing."

Elder Bednar taught the importance of allowing students to show forth faith in order to receive answers to their questions.

“We ought to expect them to be what we tell them they are,” Elder Bednar said. “We ought to invite them to act and you will stand all amazed at what they come up with.”

As part of the broadcast, Elder Bednar frequently asked audience members if they had questions but then first gave them an opportunity to answer their own questions before responding. This pattern taught the importance of giving students the opportunity to act.

“Faith is a principle of action and of power. As we act in accordance with the teachings of Christ then we are blessed with his power,” Elder Bednar said. “What all of us want is the power so we can act. That doesn’t work. Our instinct ought to be not ‘What do I tell them?’ but the question is ‘What can I invite them to do?’ ‘What inspired question can I ask, which if they are willing to respond, will begin to invite the Holy Ghost into that person’s life?’”

Elder Bednar shared a quote from President Joseph F. Smith: “Show me Latter-day Saints who have to feed upon miracles, signs, and visions in order to keep them steadfast in the Church, and I will show you members of the Church who are not in good standing before God, and who are walking in slippery paths. It is not by marvelous manifestations unto us that we shall be established in the truth, but it is by humility and faithful obedience to the commandments and laws of God.”

“That builds a little bit of at least hope if a president of the Church is talking about seemingly simple and ordinary things. I can do that. Anybody can do that,” Elder Bednar said.

Elder Bednar also pointed out that it wasn’t the angel that converted Alma the Younger. Alma the Younger attributed his conversion to fasting and prayer—simple and ordinary things.

Prior to Elder Bednar’s remarks, Elder Johnson discussed the journey Lehi and his family took to get to the Promised Land and how they had guidance through the Liahona.

“Having the Liahona didn’t change the geography between them and their promised land,” Elder Johnson said. “It didn’t shrink the Arabian Peninsula nor the seas they needed to cross. They still had to move forward in the face of challenges inherent in their epic journey—but the Liahona did guide them into more fertile parts of the wilderness and if they weren’t slothful it helped them take a direct course.”

He also highlighted how varying responses to challenges led to different results.

“Despite their journey bringing them to the same physical location, their individual eternal trajectory varied widely and was determined by their personal decisions and actions along the way,” Elder Johnson said.

Elder Johnson applied this to the journey mortals face.

“Sometimes people think they will not face challenges if they are doing what is right—that everything will be easy—and that is just not the case,” Elder Johnson said. “It does mean that we can be strengthened and guided but not that we won’t face challenges.”

WATCH THE FULL BROADCAST AT ChurchofJesusChrist.org.