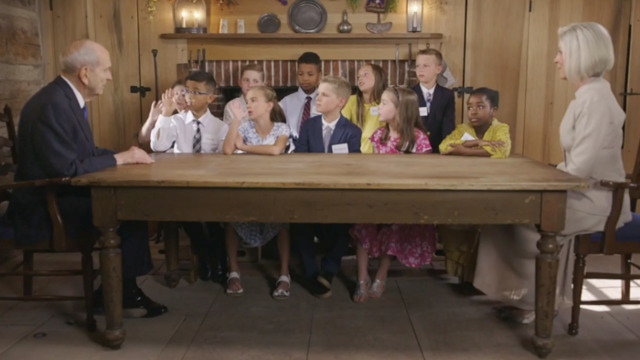 'There's never an end': The surprising response President Nelson gave to a Primary child's question that changed my understanding of the gospel

The April 2020 general conference was like no other. Broadcasting from a small auditorium, there was no general admission, prophets sat six feet apart from one another, and I imagine their words echoed from the walls of the mostly empty room. We listened from home and other locations, where fear was an emotional common denominator. COVID-19 was relatively new to the United States at that time and much was unknown, so families and individuals tuned in to conference to hear words of solace and peace. I was one of those. I was scared, upset, and fearful of what the future held. I wanted to hear from my prophet, as I truly believed he would provide a message of faith and comfort.

As usual, he did not disappoint. His words were powerful, faith-promoting, and reassuring. But there was one thing he said that initially caught me off guard. President Joy D. Jones had a video vignette in her talk where she sat in the replica log home of Joseph Smith Sr. with President Russell M. Nelson and eight primary children. She asked the children if they had any questions for the prophet. The children raised their hands, and President Nelson called on Pearl, whose innocent soul was reflected in her question. She said, “Is it hard to be a prophet? Are you, like, really busy?”

As I listened to her sweet, simple question I smiled with delight, as I’m sure many of you did. I have had the privilege of being in meetings with Apostles where we were encouraged to ask questions, but I’ve never heard one similar to that. I loved President Nelson’s honest response. “Of course it’s hard,” he replied. “Everything to do with becoming more like the Savior is difficult.” He could have said, “Oh, it’s not that difficult” or “Sometimes it can be pretty tricky.” Instead, he said exactly what he felt and what was true. Being a prophet is hard!

But then he added something that initially surprised and discouraged me. As fears of an uncontrolled and seemingly never-ending pandemic filled my mind, I heard President Nelson say the following to this sweet little Pearl: “So the answer is yes, Pearl. It takes effort, a lot of hard work, a lot of study, and there’s never an end. That’s good!”

And there’s never an end. His words hit my soul with a resounding thud. I couldn’t focus on the “that’s good” part because I was so stunned by the idea that ongoing, unending effort might be some sort of eternal principle that I had possibly misunderstood in the first five decades of my life.

To give you a little context, let me tell you something about myself. I love breaks. I love the end of the workday. I love vacations. I love the weekends. My wife can attest that on Sunday nights, I usually go into a very mild funk as I realize break time is over and it’s time to get back to the grind. If I had created the world, I probably would have tried to do it in one day and rested for six. With that understanding, you can see why the prophet’s teaching that “there’s never an end” was difficult for me to process. For me, there have been times when happiness has been elusive. I’ve often blamed my circumstance, believing that once “things were different,” joy would result. Happiness was always at the end of the rainbow. My personal rainbows were when I’d graduate from high school, or get accepted to college, or graduate from college, or get accepted to graduate school, or earn my doctorate, or get professionally licensed . . . and on and on and on. Like the rainbows I chased as a youth, arriving at the “end” simply revealed a more distant terminus that was perpetually out of reach. Happiness never came automatically with the destination. Of course, there were pleasant and satisfying moments at each of those mileposts, but the ongoing, soul-satisfying contentment I sought was not achieved.

I reflected on President Nelson’s words. I knew they were true. I focused on his optimism and affirmation that “never-ending” effort was good. He went on to say, “That’s good, because we’re always progressing. Even in the next life we’re making progress.” As I pondered on these thoughts, another prophetic teaching came to mind. I remembered hearing President Gordon B. Hinckley teach about finding joy in the journey. He was always so positive. What if, I thought, life was more about the climb than about reaching the summit? What if schooling was more about years of study and practice than about graduation? What if a career was more about decades of growth and learning than retirement? I openly admit that it is hard for me to change 50 years of thinking and start to see happiness in the path, considering I’ve been focused on destinations for so long. But prayerful pondering has helped me develop understanding I had not previously considered.

Progression is the opposite of destination. Once you get to where you are going, if you stop there, your progression ceases. As a lifelong fan of Disneyland, I’ve waited in countless queues to reach an attraction loading area. My heart smiles as I climb aboard the vehicle and ride off into a world of sounds, lights, and fantasy. When I get off the ride, what do I do? I keep going. I find another attraction queue to wait in, or I sit in front of the castle and have a churro, or I find a quiet place to appreciate the wonder and beauty around me. If I used the “It’s all about the destination” approach, my day would consist of entering the park, getting in line for the first ride, riding it, and then sitting in the attraction exit area for the rest of the day. That sounds like a pretty boring day and a colossal waste of time and money. If I applied my traditional Disneyland strategy to my life, then I would set a goal, work hard to achieve it, rejoice in the accomplishment, and then “get back in line” for the next goal. Despite the difficulty, that sounds like a pretty satisfying life.

With that perspective, President Nelson’s words start to ring with hope and optimism, rather than the initial despair I felt. Finding happiness in work and growth means a lifetime and eternity of potential satisfaction and accomplishment. Remember the Lord’s express purpose: “For behold, this is my work and my glory, to bring to pass the immortality and eternal life of man” (Moses 1:39, emphasis added). His work is the same as His glory. I don’t think Heavenly Father is looking forward to the time He can stop working toward our rescue and redemption, seeking some sort of “celestial weekend.” His efforts to save us are never-ending; thank heaven for that. He joys and glories in His work. If we are to become like Him, then we need to learn to joy and glory in our ongoing efforts as well.

With additional reflection, another truth from President Nelson’s words has become clear. This life is our opportunity to become the best version of ourselves, with the ultimate goal of having the image of Christ engraved in our countenances (Alma 5:19). With the power of moral agency, we make daily choices that can move us along the path of discipleship. Frequently, we experience circumstances that make us feel like victims of our situation. Sometimes these limitations exist only in our minds, but other times there are practical conditions that do limit some of our choices.

Yet we can always act. We can always choose. Knowing these truths, President Nelson’s teaching that we are always progressing becomes a proclamation of independence and self-direction. We can progress! We can progress every day. We can become better and better, learning and growing, for now and forever. That is a message of hope and comfort. It is a message of power and determination. “For the power is in them, wherein they are agents unto themselves. And inasmuch as men do good they shall in nowise lose their reward” (Doctrine and Covenants 58:28). The power is in us. The “reward” is ongoing, representing progression from now and into the eternities. These truths sit well with me, as they show how life is not just to be endured, but to be lived to the fullest. Take control of your situation as much as you can. Maximize your effort every day. Choose righteousness and reap the joy that comes from a daily walk with the Redeemer of all mankind.

I thank Pearl for her innocent question. I thank President Nelson for his honest and inspired answer. I thank the Holy Ghost for personalized instruction that helped me realize President Nelson’s counsel was nothing to be feared but to be embraced and employed. As we live after the manner of happiness, his statement “and there’s never an end” can be one of the most pleasant concepts we’ve ever considered.