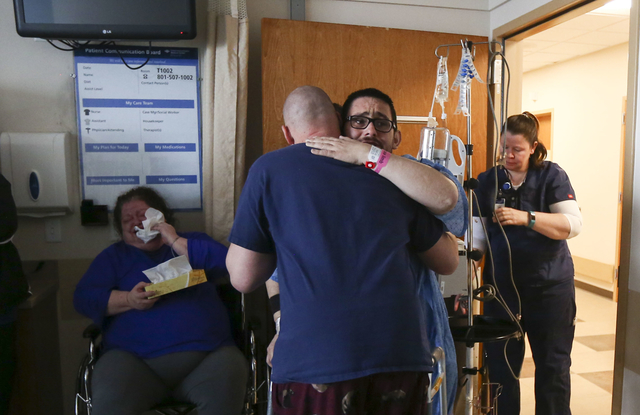 "You Are Definitely My Angel": Latter-day Saint Donates Kidney to Stranger

"You are definitely my angel, there's no doubt about it. You're my brother now, you're a part of me now," Mitchell Salas said of the stranger who gave him his kidney.

For Matthew Thompson, a 32-year-old father of three, donating his kidney to a stranger was the same as helping a neighbor carry in groceries.

"Why would I be selfish and keep it when someone else needs it that bad?" he said Friday.

Mitchell Salas, 30 of Woods Cross, has suffered from kidney problems since he was a child. He'd been on dialysis for the past three years, and even though people in his life offered to donate kidneys to him, things kept falling through. At one point, his father, Willie Salas, was going to donate his kidney but he was eliminated during the screening process.

That all changed when he got a phone call three weeks ago and doctors told him he would receive a kidney from a good Samaritan donor — someone who chooses to donate an organ to a complete stranger.

Mormon Life Love ServiceLove,Service,Mormon Life
Comments and feedback can be sent to feedback@ldsliving.com