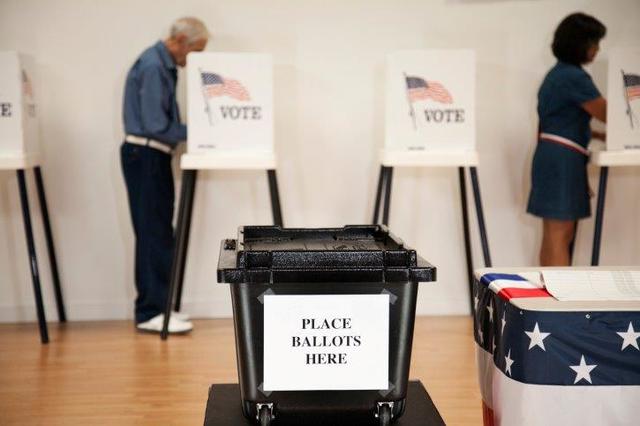 Members of the Church all over the world are invited to be active participants in their community by voting in elections and being civically engaged. The 12th article of faith says, "We believe in being subject to kings, presidents, rulers, and magistrates, in obeying, honoring, and sustaining the law." As we approach Election Day, here are 12 quotes from general authorities about voting.

"… to vote for wicked men, it would be sin" (Documentary History of the Church, vol. 6, p. 323, quoted by Ezra Taft Benson in "Civic Standards for the Faithful Saints," April 1972 general conference).

"The Church does not engage in politics; its members belong to the political parties at their own pleasure. . . . They are not asked, much less required, to vote this way or that. . . . But they cannot justly be denied their rights as citizens, and there is no reason why they should be, for, on the average, they are as loyal, as sober, as well educated, as honest, as industrious, as virtuous, as moral, as thrifty, and as worthy in every other respect as any people in the nation, or on the earth" ("Chapter 14: Being Loyal Citizens," Teachings of Presidents of the Church: Joseph F. Smith, 2011).

"[We] must seek for statesmanlike men who will ask, 'Is it right and is it good for the country or the community?' instead of those who may merely ask, 'Is it politically expedient?'" (As quoted in "The American Presidency and the Mormons," Ensign, October 1972).

"We must make our influence felt by our vote, our letters, and our advice. We must be wisely informed and let others know how we feel. We must take part in local precinct meetings and select delegates who will truly represent our feelings" ("The Constitution—A Glorious Standard," Ensign, September 1987).

"We can exercise our right, with all other citizens, to vote for men and women who reflect our own values. We can also express our views as all other citizens have a right to do in the legislative process of both the state and the nation. With all others, we can claim our rights of free expression. We can petition for the redress of grievances. We must hold to our beliefs and do what we can, for there is no desert to flee to in order to have full freedom. There is no place across the waters for the Pilgrims" ("A New Civil Religion," Ensign, October 1992).

"We must not be deterred or coerced into silence by the kinds of intimidation I have described. We must insist on our constitutional right and duty to exercise our religion, to vote our consciences on public issues and to participate in elections and debates in the public square and the halls of justice" ("Religious Freedom," BYU-Idaho Speech, 13 October 2009).

"It will be hard to change society at large, but we must work to improve the moral culture that surrounds us. Latter-day Saints in every country should be good citizens, participate in civic affairs, educate themselves on the issues, and vote" ("Lamentations of Jeremiah: Beware of Bondage," Ensign, November 2013).

"The Father's plan and His Beloved Son's gift optimistically endow humans with both the ability and responsibility to make choices with the hope, indeed the confidence, that we will ultimately choose that which benefits the individual and the larger society in which those individuals live. . . . Inherent in liberal democracy is an assumption, a hope, a belief that free people will use their liberty to choose good over evil, right over wrong, virtue over vice" (From an address to the J. Reuben Clark Law Society in Washington, D.C., February 15, 2013).

"May we be good citizens of the nations in which we live and good neighbors in our communities, reaching out to those of other faiths, as well as to our own. May we be men and women of honesty and integrity in everything we do" ("Until We Meet Again," October 2008 general conference).

"[As] every recent president since Eisenhower has explicitly observed, one of the most important acts of any president—some have said the most important—is to appoint members of the Supreme Court, whose average tenure has been several times that of our presidents. Therefore, over the decades of your future careers as voting Americans, just remember that when you vote for a president, you are doing more than picking the person who will lead us in war and peace and have access to Camp David and Air Force One. You are also in effect making a decision as to what kind of person you want on the Supreme Court. Our nation’s history over the last half century demonstrates this fact" ("The Constitution and the Restoration," BYU Speeches, January 15, 1991).

"If the foregoing historical sketch suggests anything for today, it is that we as Latter-day Saints, above all people, must do two things to best promote responsible political debate: (1) study the issues on their merits, become as well informed as we possibly can, and vote for the candidate that most fully represents our personal convictions, and (2) debate the issues with such a combination of firmness and charity that while others know where we stand individually, and why, we do not at the time call into question their faith or patriotism and alienate them as brothers and fellow-citizens if they happen to disagree" ("The American Presidency and the Mormons," Ensign, October 1972).