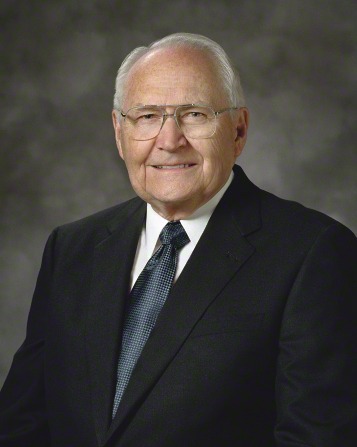 1. At age 92, he is currently the oldest living apostle.

2. The L stands for Lowell

3. Perry, Utah, is named after Elder Perry's ancestor, Gustavus Adolphus Perry, who was one of the first settlers in the area.

Elder Perry with his wife, children, and son-in-law. LDS.org

4. He has three children--Barbara, Lee, and Gay

5. As a child, Elder Perry vowed to never miss Church. One Sunday he was sick with tonsilitis, but he was determined not to break his attendance record. "Despite the fact that he was quite ill, he made every effort possible to be where he knew he was supposed to be" (Lee Perry, "Elder L. Tom Perry of the Council of the Twelve" Ensign Feb. 1975).

6. He served his mission in the Northern States Mission, which included Ohio and Iowa.

7. Only six weeks after he came home from his mission, he was drafted into the armed forces and volunteered to serve in the Marine Corps.

8. He and his wife Virginia once served at the Mormon Pavillion as World's Fair missionaries. Elder Perry became well-known for his ability to sell copies of the Book of Mormon.

Elder Perry at a BYU basketball game with President and Sister Samuelson. Photo by Sarah Hill via The Digital Universe

10. Elder Perry always makes time for his family no matter what, and he always made his callings and talks a family affair. His son Lee said, “When my father was a high councilor in the Sacramento area, I would accompany him on his speaking assignments as his timekeeper—a position I felt was very important. He would give me his watch, and I would sit in the center of the congregation, a few rows from the front. We used the signs of the three monkeys—see no evil, hear no evil, and speak no evil. If he wasn’t standing straight, I would cover my eyes. If he was speaking too loudly, I would cover my ears, and just before his time was up, I would cover my mouth.”

So here's to you, Elder Perry! Ninety-two and still young!

To learn more about the life of Elder Perry, check out his biography, L. Tom Perry, An Uncommon Life: Years of Preparation, written by his son, Lee Perry.

Uplifting and inspirational, this story of a remarkable man of faith encourages us to live better lives by drawing closer to God, selflessly serving others, and leading our families along the path of righteousness.