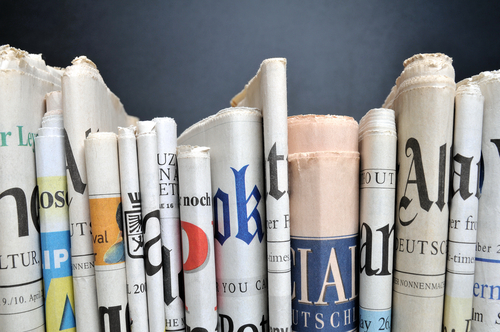 15+ Times the Church Has Been Praised by Major News Outlets

It is not uncommon to see the Church and its members in the news. We've compiled a fascinating list of times a unique aspect of the Church has been spoken of positively by news outlets from across the world (organized by year). You may even learn something new about the Church from one of these 18 stories.

In an article called "Why the 'Mormon' church changed its name. (It's about revelation, not rebranding.)" CNN said this about President Nelson: "There's no mistaking it, this is Moses in a business suit, someone who can lead people, write Scripture and talk to God." The article includes quotes from Sister Nelson about what it's like when her husband receives revelation and a video from general conference of President Nelson explaining the real reason he asked for the full name of the Church to be used.

The Daily Telegraph on The Book of Mormon Musical

The Daily Telegraph commented on the Church's response to The Book of Mormon musical in an article called "Why we take Book of Mormon in good humour." They said, “Instead of reacting to the false and often confronting depictions of our faith, The Church of Jesus Christ of Latter-day Saints (as Mormons are officially called) responded with a lively and good-natured campaign that told people who Mormons really are. The result was a resounding applause by the public and media outlets on the church’s turning of what could have been detrimental to the church into a positive outcome.”

The Atlantic on Family Home Evening

The Atlantic called family home evening "an antidote to fast-paced living." The article included a quote from Vern Bengtson, a sociologist who ran a major study of at-home religious practices that spanned nearly four decades, in which he called family home evening one of “the most successful [religious] programs fostering intergenerational connections and the nurturing of families.” 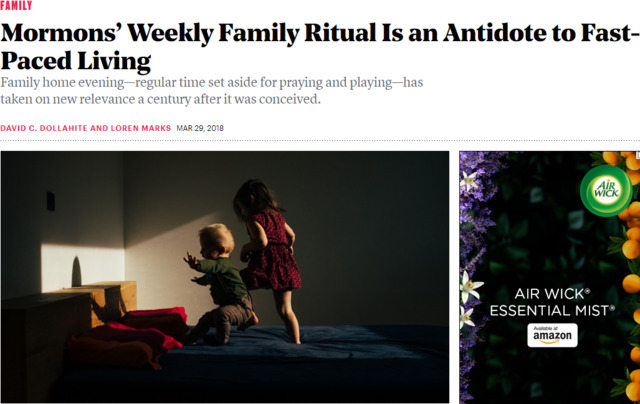 The New York Times on the Church's Defense of Religious Freedom

The New York Times said the nation should follow the Church's example of protecting religious freedom. An article called "What Islamophobic Politicians Can Learn From Mormons" quoted the Articles of Faith and Joseph Smith and said, “BuzzFeed News reported in April that since 2015, Republican officials in 49 states have publicly attacked Islam, some even questioning its legitimacy as a religion. The only exception? Utah. In that state, where a majority of residents is Mormon, members of the Church of Jesus Christ of Latter-day Saints, elected officials seem to have a deep understanding that an attack on the religious freedom of one group is an attack on the religious freedom of everyone. The rest of the nation should follow their example.”

Medium on Jane and Emma

Medium responded to the new Latter-day Saint Film Jane and Emma with this powerful article title: "Are Mormons Having a Public Conversation Everyone Else Should be Having?" The article went on to say of the movie, “It’s exactly the kind of film Americans — faithful, sorta-faithful, and not-even-in-the-neighborhood-of-faithful alike — should go see when it hits theaters this October. By putting this piece out there, Mormons are demonstrating a willingness to have an open, uncomfortable conversation that some churches in America’s Christian community have been meticulously avoiding.”

Inc. ran an article called "Want Innovation? This 94-Year-Old Leader Innovates." They gave President Nelson’s leadership glowing praise. The article stated, “We often think of new and innovative being the purview of the young, but if you want to see innovation and change on a grand scale, look at the president of the Church of Jesus Christ of Latter-day Saints, Russell M. Nelson.” 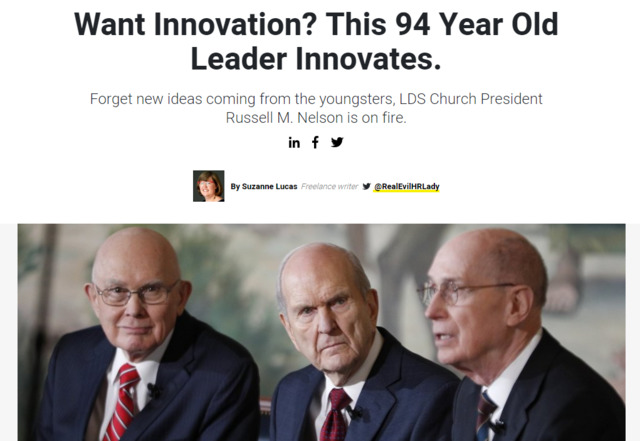 PBS on the Welfare Program

PBS featured the Church’s welfare program in a short video in which they said, “There may be other charities that are larger or more helpful, but the welfare tradition within the Church of Jesus Christ of Latter-day Saints must be one of the world’s best.” The video states that the Church welfare program is set apart from others for two reasons. First, it helps anyone regardless of their religion or background; and second, it teaches self-reliance and self-worth by not giving out any handouts.

The Wall Street Journal on the Church's Aid of Refugees

The Wall Street Journal praised the way the Church has aided refugees in an article called, "With Welcoming Stance, Conservative Utah Charts Its Own Course on Refugees." The article said, "About two-thirds of Utah’s three million residents are members of the Church of Jesus Christ of Latter-day Saints, the Mormon Church organized in 1830 in New York state. Many have ancestors who were driven out of several states, where they were regarded as a threat, before settling in the Salt Lake Valley in 1847. Religious freedom is 'embedded deeply in Mormon DNA.'"

Smithsonian ranked Joseph Smith first on a list of significant religious figures in a collector's edition of the magazine highlighting the 100 most significant Americans of all time. Brigham Young was listed as number three.

Forbes on the Church's Internet Use

Forbes magazine ran an article called "How Mormons Use The Internet To Spread The Good Word." The article said, “The Church of Jesus Christ of Latter-day Saints, whose members are commonly known by the abbreviation 'LDS' or the nickname 'Mormons,' is one of the most advanced large organizations in the world when it comes to SEO, content marketing, and the use of social media.”

Huffington Post ran an article that said Latter-day Saint families' YouTube channels "keep church traditions of journaling alive." The article stated that one couple’s videos have “something remarkably spiritual” about them.

The Los Angeles Times on the Tijuana Mexico Temple

The Los Angeles Times published an article during the dedication of the Tijuana Mexico Temple in which they called the Church "a growing flock in Mexico." The article praised the temple saying, “Every inch of the 151-foot-tall Tijuana temple exudes craftsmanship. Marble staircases, towering wooden doors, railings made of bronze, open ceilings with crystal chandeliers and floors made of imported material fill its interior.”

The Jewish Press on the Jewish Relationship with the Church

The Jewish Press published an article called “Our Friends the Mormons.” After meeting with two apostles, and later Utah’s senators at the time, the author said, “I learned that the Mormons have great respect for Jews and the state of Israel and truly want to help us. We should work toward building bridges to the LDS in our local areas, as these people share many of our values, ideals and concerns, and essentially are our allies.”

Mint on the Church in India

Mint, an Indian newspaper, wrote an article about the rise of the Church in India. The piece featured a member named Praveen Beesa and his experience converting to the Church. The article said that what India’s 11,000 Latter-day Saints lack in numbers they “make up for in passion.” 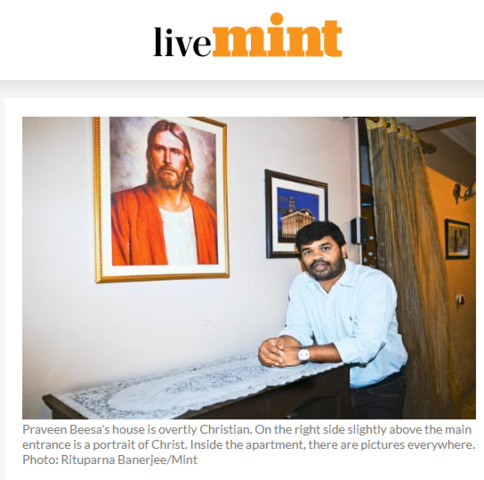 The Chicago Tribune praised the way the Church responded to the rise of The Book of Mormon musical in a unique way by saying, “Or perhaps the Mormon respect for freedom of expression is rooted more deeply than most outsiders realize.” The article also stated that Joseph Smith’s death was “an event that must count among one of the darkest moments in this state’s history.” The article, called "Mormonism, Illinois have surprising history," shared more intriguing facts about important Church history events in the state to its predominantly non-member audience.

The New York Times on Navajos and the Church

The New York Times ran an article called "Some Find Path to Navajo Roots Through Mormon Church." The article, which discussed how Navajos find meaning and cultural connection to the Church, says, “In a land troubled by dysfunction and despair, a growing number of Navajos have been turning to the Mormon Church.”

The Wall Street Journal on the Welfare Program

The Wall Street Journal had nothing but good to say about the Church’s welfare efforts when the new Bishop's Central Storehouse opened in January of 2012. The article "What the Mormons Know about Welfare" called the storehouse “a symbol of strength and self-sufficiency,” and that “the church continues to be an important force in bringing food and supplies to the impoverished and victims of disaster.”

CNN on the Church's Humanitarian Efforts

After the destruction caused by Hurricane Sandy, CNN posted an article called, "In Sandy's wake, help comes in unexpected ways." One section focused on the Church’s efforts. The article said, “Arriving by bus, train and plane, thousands of Mormons from across the country canceled their church plans one Sunday to help with Sandy relief.” 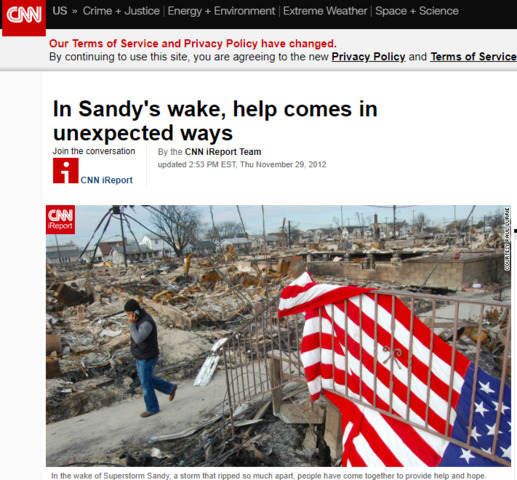