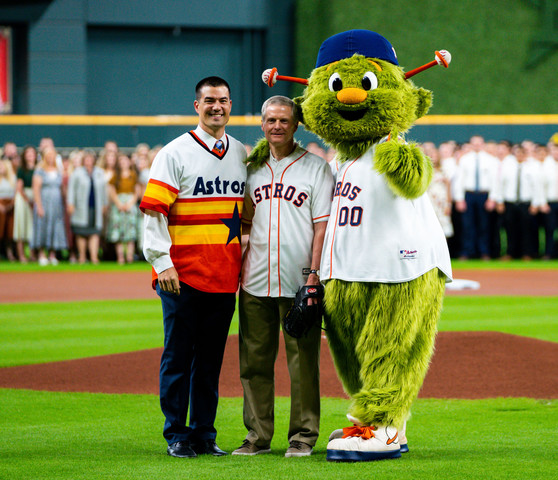 “They were angelic!" April Mecham said about the choir of 150 missionaries she led in singing "The Star-Spangled Banner" at a Houston Astros game.

With the missionaries was their mission president, Jeremy Guthrie, who once turned down a $650,000 bonus from the Mets to serve a mission. The Mets general manager asked Guthrie if $1 million would convince him to play baseball full-time. Guthrie refused, choosing his mission over the Met. Guthrie later became the first returned missionary to appear in a World Series.

Now serving as mission president of the Texas Houston South Mission, Guthrie stepped once again beneath glaring stadium lights, but instead of taking his normal place at the pitcher's mound, Guthrie stepped to the home plate, acting as catcher as Elder David A. Bednar threw the ceremonial opening pitch.

About the evening, Elder Lisala Tai told the Church News, “To sing in front of the crowd and have the opportunity to help them feel the Spirit was an awesome experience.”