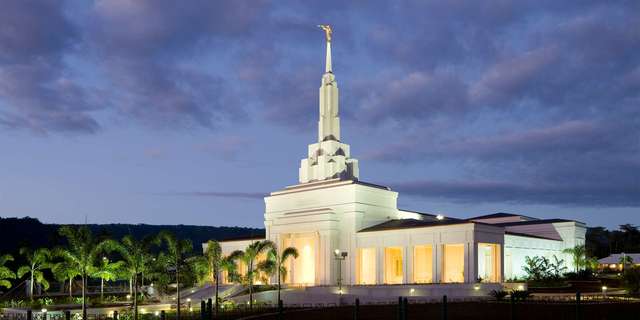 Though we sometimes hear of Church buildings miraculously surviving natural disasters, that is not always the case. In 2010, just a little over a week before Christmas, the historic Provo Tabernacle caught fire. The interior of the building burned to the ground, and only the outer walls of the tabernacle survived.

However, the fire that destroyed much of the tabernacle turned into a blessing when President Monson announced in the October 2011 general conference that the demolished tabernacle would become the site of the Provo City Center Temple.

Similarly, there have been times when the tragedy of the destruction of a temple by fire has turned into a blessing for Latter-day Saints.

On July 9, 2003, at around 6:30 p.m., workers renovating the Apia Samoa Temple detected a fire inside the building. Though they tried to put it out, the fire quickly spread throughout the temple.

Samoan member Mika Lolo had just finished dinner when he saw the fire trucks drive by. When he followed the trucks, he could see the flames coming from the front of the temple and could feel the heat as the fire burned the temple to the ground.

"I was just speechless [and] I was crying like a baby," Lolo said, according to rsc.byu.edu.

The Saints in Samoa were devasted by the fire, and the timing was particularly difficult. Temple renovations were nearly complete, and many were looking forward to the doors finally opening again in October.

But through some miracle, not every part of the temple was destroyed. The fiberglass angel Moroni survived, despite the fact that fiberglass is a very flammable substance.

The exact cause of the fire was never announced by the Church, according to rsc.byu.edu. However, the Sunday following the fire, this profound statement was read by local leaders to the Saints in Samoa:

A week after the temple fire, the First Presidency announced plans to rebuild. In October, the same month the temple was supposed to be open for the use of members, the Church broke ground.

For two years, the Saints in Samoa anxiously waited to have a temple yet again in Apia.

Then, natural disaster threatened the Apia temple once again in February 2005. At the time, the temple had a temporary water-proof but not wind-proof roof and the windows, too large for coverings, were left open. As Hurricane Oaf, a category five storm, neared Apia, it looked like the temple and the inhabitants of the island were in danger. Then, at the last second, the hurricane veered from its course, saving the island and the temple from extensive damage.

"Our Eternal Father in Heaven, we rejoice in the knowledge that there is again in these favored islands of Samoa a sacred house befitting Thy divine nature. . . . Now Father, we pray that Thou wilt watch over this sacred structure and preserve it from the kind of destructive force which destroyed its predecessor building. Wilt Thou sanctify it and hallow it, that all who enter herein may do so with a knowledge that they are in Thy holy habitation" (President Gordon B. Hinckley, "Dedicatory Prayer: Apia Samoa Temple," September 4, 2005).

Mormon Life Temples FireTemples,Fire,Mormon Life
Comments and feedback can be sent to feedback@ldsliving.com