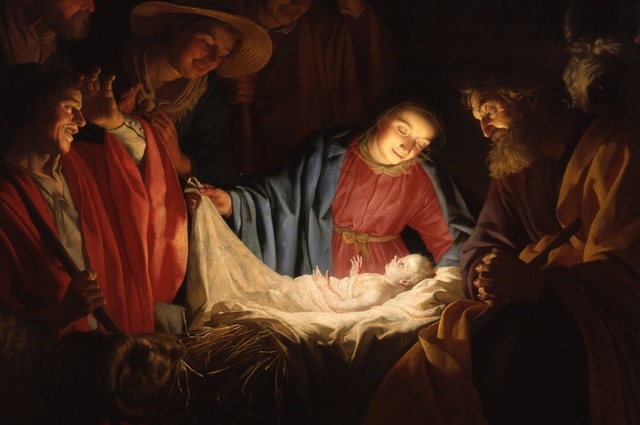 3 Details That Add Meaning to Jesus’s Declaration, “I Am the Light of the World”

“Then spake Jesus again unto them, saying, I am the light of the world: he that followeth me shall not walk in darkness, but shall have the light of life. . . . These words spake Jesus in the treasury, as he taught in the temple: and no man laid hands on him; for his hour was not yet come” (John 8:12, 20 KJV).

There are at least three significant details in John’s report of this particular night during the Feast of the Tabernacles or Sukkot—one of the three most important feast-days and celebrations of the Jewish calendar year—that make for enriched interpretation of Jesus’s declaration in these verses.

Jesus spoke “in the treasury.”

The first detail worth noting is the very specific location of His declaration. While we may think of the word treasury as a reference to a room in Herod’s magnificent temple, the treasury was actually a series of 13 “collection boxes” fashioned in the shape of tall, inverted heraldic trumpets.  Each trumpet was either attached to a wall or to a pedestal at the west end of a courtyard of the temple known as the Court of the Women, the name being a reference to the gender of those who were permitted inside the court (but no further).

In addition to properly veiled women, ritually pure Jewish men were also allowed inside the court. All, however, gathered to argue over doctrine, to “mill about” on feast days, and to drop monetary offerings into the 13 trumpet-shaped collection “boxes” that were designed for making donations by inserting coins at the narrow opening at the top of the trumpets. Coins would fall to the larger bottom, the tapered shapes thus preventing thieving hands from reaching in to steal the accumulated offerings. Mark’s gospel tells how Jesus had watched the ostentatious priests who paraded about that court in front of the treasury wall, wearing their finery decorated with “oversized tassels” on their prayer shawls before dropping their offerings into a trumpet. He then commented on the poor widow who brought all she had to the court and the trumpets (see Mark 12:41-44 describing the “widow’s mite”).

On all four sides of the interior of the Women’s Court was a colonnaded, roofed area—a gathering place for temple attenders who could sit or stand out of the glare of the sun or inclement weather. Many came to hear noted rabbis and wise men teach, hence John’s reference to Jesus’s “teaching" in the treasury (John 8:20).

Jesus’s appearance came during the Festival of Tabernacles.

Jesus had secretly arrived in Jerusalem midway through the festival known as the Feast of the Tabernacles or Sukkot. Celebrated annually in the fall of the year, the festival commemorated the wanderings of the Children of Israel whom Moses had led in the wilderness. However, in addition to remembering their ancestors’ wanderings, Jews were to anticipate the coming of an “Anointed One,” a Messiah who would deliver them from the oppression of their Roman overloads. During the eight days of the festival, a family in Jesus’s day (as well as our own) built and lived in a small hut called a sukkah (or tabernacle in English) to remind themselves of the dwellings of the Israelites as they roamed in preparation for entry into the Promised Land.

Jesus had delayed His coming to Jerusalem that year because, he said to his disciples in Galilee, as the Messiah (or Christ in Greek), “His hour had not yet come.” He knew there would be chaos and controversy surrounding His appearance on the Mount. Some of His followers had even deserted Him in Galilee (John 6:26-30). His safety, if not His very life, was at risk in Jerusalem where the most devout and critical Pharisees, scribes, and priests were waiting for even a simple pretext to warrant His arrest.

John’s gospel describes the mean crowds and the contentious challenges to Jesus and His disciples as He taught in the customary places in the temple courts. During the last day of the festival, He promised them “living water” if they would believe in Him and His word (John 7:39). But the assembled priests had bellowed to the crowds in order to foment their anger. “How can the Messiah come from Galilee,” they said (John 7:52). He authoritatively dismissed the accusers of a woman supposedly caught in the very act of adultery. She was brought to the court/treasury, and He spoke to her of new chances to live a life of goodness (John 8:1-11).

Jesus declared Himself to be the Light of the World on a special night.

We often study the events in these three chapters of John separately. Taken as a continuous narrative, however, the gospel has given us a compelling story that builds to the climactic event on the last night of the festival known as the Illumination of the Temple. So the last and perhaps most important contextual information has to do with an event that served to conclude the actual festival’s celebrations.

Prior to that night, priests would have placed huge piles of wood and other combustibles in 16 enormous bowls that topped the four, 75-foot tall, four-branched bronze candelabra located in the corners of the Women’s Court.

As darkness fell, it must have been an overwhelming sight when the fuel-packed candelabra bowls were set alight. With the help of an illustration, we can imagine four giant flaming pillars towering above the walls of the temple. It was said that people could see the blazes for miles around the city. We can also picture respected priests, including Pharisees, who were said to sing psalms as they danced with hands on each other’s shoulders as they joyfully serpentined about the court. Spectators watched from under the treasury galleries or on the roofs of the four corner rooms of the court. Everyone’s senses would have been engaged by the heat, the music, the bright light, the ashes and sparks blowing about in the night sky, and the smell of smoke and perspiring bodies. 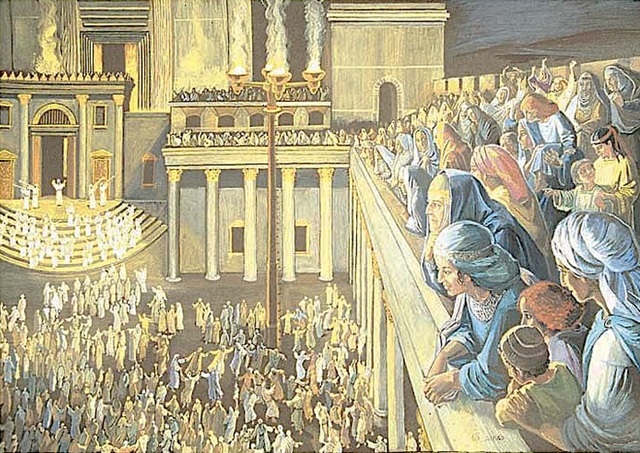 The importance of context in this passage from John becomes clear in the last verse (20) of John, chapter eight, when Jesus appeared in the midst of the celebrating crowds who had mocked and scorned Him earlier that day. The leading priests and Pharisees had staged a number of events to entangle Jesus and provide grounds for His arrest. But there He was, standing before the enormous lighted candelabra, testifying of Himself in the form of a metaphor, to be the brightest, most powerful beacon that mankind could and should look to for deliverance not only during one solitary celebration but also during an entire lifetime.

“I am the light of the world,” He declared.

We acknowledge, especially during this season of the year, that He was and is the Messiah whose power lights our way throughout this “lone and dreary world” as we attempt to bring light to others as we serve and love them as He asked us to do!

Lead image Adoration of the Shepherds by Gerard van Honthorst 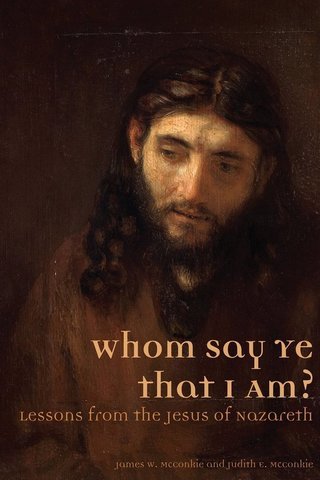 James and Judith McConkie are the authors of Whom Say Ye That I Am: Lessons from the Jesus of Nazareth, published by Kofford Books. It is available in print, Kindle and Audible formats at Deseret Book stores and online and through barnesandnoble.com and amazon.com. This is the seventh in a series of essays about the book. Watch for more on ldsliving.com.