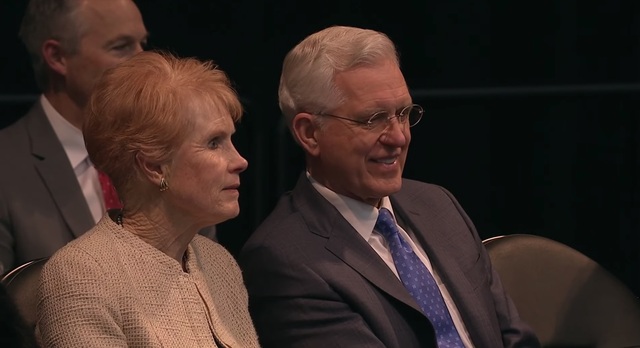 It's an acronym well known to young adults—"FOMO"—fear of missing out.

And it's one of three fears Elder D. Todd Christofferson says can prevent us from committing to the Savior.

The first worldwide devotional of 2020 was held Sunday, January 12 at Utah Valley University. Elder D. Todd Christofferson of the Quorum of the Twelve Apostles and his wife, Sister Kathy Christofferson, both addressed young adults.

According to Church News, Elder Christofferson shared three fears that can keep us from committing to the Savior: fear of missing out, fear of failure, and fear of sacrifice.

Fear of missing out

Elder Christofferson explained that having some fear of missing out is rational, however delaying a decision for "seemingly forever" can cause missing out on other things, even better things.

“. . .Unless you make a choice and commit to a certain direction, your life will be pretty erratic, and in the end, you will in fact miss out on most of the very best things,” he said.

The lifelong commitment to follow the Savior can at times feel daunting, Elder Christofferson acknowledged, but young adults need not fear because the Lord is on their side.

“We need not live in fear of failure. We are not alone. We are not without help," he said. "Anyone who truly does commit to Christ, to full discipleship, cannot fail. If we are bound to Him who descended below all things, who overcame all things, and who now has all power, we cannot fail.”

Sister Christofferson recounted a story from early in the Christofferson's marriage when members were asked to contribute to a building fund to renovate their meetinghouse. Despite their finances being tight (Elder Christofferson was in graduate school and they had two small children), they chose to donate to the fund.

A few weeks following their donation, they were rear-ended. The man who hit their car asked if they could settle it privately. Following an estimate for the repair, the man gave them a check.

“That check was almost the same amount as the building fund assessment we had paid,” Sister Christofferson said. “This was a witness to us that the Lord does, as Nephi said, ‘provide means whereby we can accomplish the thing which He has commanded’ (1 Nephi 17:3)."

READ THE REST OF THE STORY AT CHURCH NEWS.