From Albert Einstein to John Wayne to Steve Jobs, Time magazine has featured some of the most influential people in American history—including a few prophets.

Since 1930, three Latter-day Saint prophets have been on the cover of the news magazine for various reasons. From the centennial celebration of the Church to delving deeper into their fascinating lives, here's what this nationally recognized news magazine had to say about these latter-day prophets. 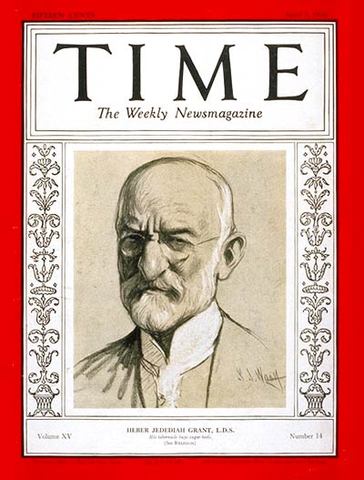 On April 7, 1930, President Heber J. Grant became the first prophet ever to be featured on the cover of Time magazine. Though publications had written articles about Latter-day Saints before, there existed a general curiosity, especially with the passing of polygamy, about what members believed.

Praising his success in business, the article noted that many prominent men at the time were on boards of successful businesses in Utah "but none more often than that of Heber Jedediah Grant."

And, of course, the article also described President Grant's role as the leader of the Church, noting he was, "Tall, bewhiskered, graced with patriarchal kindness and authority, he [Heber J. Grant] is, as divinely authorized President, Prophet, Seer and Revelator of the Latter-day Saints, responsible to no one for his administration of L. D. S. affairs."