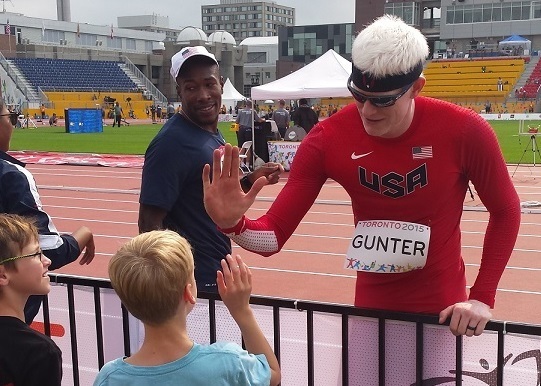 3 Mormons to Watch for in the 2016 Paralympics

Heading to Rio this year along with several other LDS athletes are three inspiring Paralympic athletes. Learn more about these incredible athletes and how they have overcome difficulties to make it to the 2016 Rio Games.

At 9 years old, Jason Smyth was diagnosed with an eye disease that reduces his vision, but that hasn't stopped him from pursuing his passion. Though unable to serve a traditional LDS mission, Smyth says, "Instead I have been blessed with a talent that takes me all over the world and allows me to meet many different people. I try to use these opportunities to share some of the things I know through interviews, public speaking events, and by sharing my beliefs with the people I meet."

Tyson Gunter has albinism. As a result of his condition, his vision is limited and his depth perception is virtually non-existent. After an LDS mission to Washington, he walked on to the track team at Idaho State University. After college, Gunter made his presence felt on the international stage. In 2013, he won the silver medal in the high jump at the Paralympic World Championships in Lyon, France. Two years later, he won the silver medal in the long jump at the Para Pan America Games in Toronto, Canada.

However, The International Paralympic Committee recently elected to remove jumping events for Gunter's class (T13 limited vision), which meant that if Gunter wanted to compete in Rio, he couldn't get there as a jumper. Instead, he had to qualify as a sprinter for the 100m and 400m—the latter of which he describes as "one of the most hated events in all sports."

No matter what he's facing, however, Gunter always places his faith first. "The gospel has influenced everything in my life," Gunter says. "I think that is the whole goal, to live the gospel and not just go to church . . . I don't do everything perfectly, of course, but I always try to consider my decisions based on the lifestyle that the gospel teaches."

When a car ran a light, slamming into the side of the car Ann Yoshida was riding in, Yoshida was left paralyzed and with a brain injury that required her to be placed in a medically induced coma.

Months later, Yoshida awoke only to find that she couldn't speak; she had to begin using sign language to communicate.

An athletic and competitive person, Yoshida wasn't discouraged by this new challenge. Relying on her spirituality, she quickly began doing all of the things she loved to do before: talking, tennis, racing, surfing, outrigger canoeing, off-road hand-cycling, paddle boarding, painting, and traveling.

Now, Yoshida is competing in the 2016 Paralympics in Rio. Outside of competing, Yoshida is also pursuing a doctoral degree in Occupational Therapy at Pacific University and devotes her time to rehabilitating others who have been injured and making her community more inclusive for people of all abilities.