The Golden Plates comic series, originally a Book of Mormon adaptation project started by Michael Allred in the early 2000s, was recently updated and made re-available online at LDS Ideas. Andrew Knaupp, who worked on revamping the series for digital format, found that immersing himelf in the project gave him unique insights regarding Joseph Smith's translation process and the stories within The Book of Mormon.

In the original series, the text remained faithful to the words and phrases found in The Book of Mormon. When Knaupp set out to digitize the series, he hadn't been planning to change any of that. "I really respected Micahel Allred for keeping the text faithful to the original scriptures, and I understood why he'd done so," Knaupp wrote to LDS Living. "Scriptures are carefully written, and with critics already opposed to a comic book version of The Book of Mormon, why take the chance of them criticizing the text as well by changing it?"

► You'll also like: How a Book of Mormon Story Ended Up in a DC Comic (+ Other Ways Mormons Share Their Faith in Comics)

But as Knaupp shared his project with his sons, aged 8, 10, and 12, he found that the original text wasn't appealing to a young audience. He wanted to create something that kids could understand and relate to on their own.

A New Appreciation for Translation

This realization led Knaupp to adapting the text, trying to find words that fit a younger vocabulary and modern view of the world. "I didn't want to go for the same simplified text as in the Book of Mormon Stories books, just lessen the unique scriptural words that 7 to 9-year-olds wouldn’t understand, like 'abominable' and 'Gentile,'" Knaupp wrote. 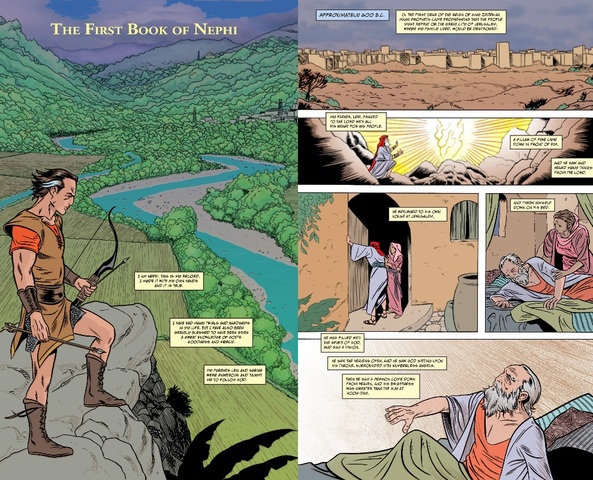 Knaupp learned that some words translate fine without loss of meaning, but others do not. He could imagine Joseph Smith looking at the writing on the plates and having a perfect spiritual understanding of what the word would have meant to the Nephites or the Lamanites, but struggling to find an English word equivalent. He thinks that's probably why the French word "adieu" is used at the end of the book of Jacob.

► You'll also like: Joseph Smith, Donny and Marie + Other Famous Mormons Who Appeared in DC and Marvel Comics

"Joseph’s mother had used the word adieu, and he had learned that it meant a farewell that included a blessing. Whatever Nephite word was the equivalent to that we’ll never know, but it worked to convey that Jacob wasn’t simply saying goodbye. I wrote it in The Golden Plates as, 'May God bless you,'" wrote Knaupp.

Casting Lots or Following God's Will

Another interesting insight was what Knaupp learned about the phrase "cast lots," which is used in The Book of Mormonwhen Nephi and his brothers return to get the brass plates. Knaupp had always assumed that casting lots was a random way to make a decision, like rock, paper, scissors. He learned, however, that casting lots was a common way of making important decisions in the Bible. Anciently, casting lots was an act of faith. Individuals believed that it was a physical method in which God revealed His will, similar to the Liahona. 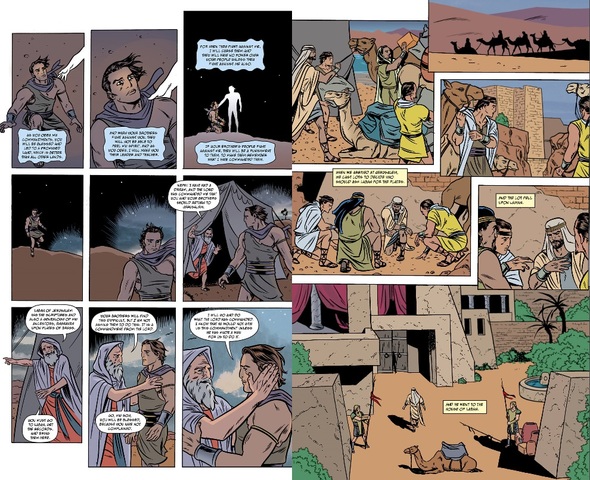 Details Left Out of The Book of Mormon 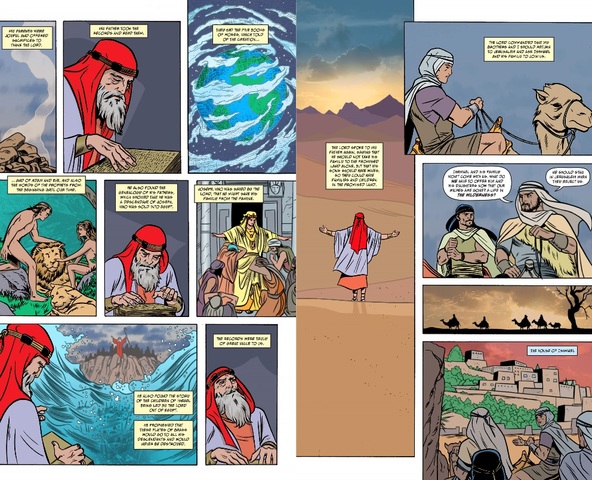 Knaupp wrote, "Nephi had already written everything down in detail on the large plates, so he really wasn't concerned about the details of people’s names, birth dates, etc. on the record we have because he already wrote all of that down. He was trying to give us the minimum amount of story to provide context for the sacred things he experienced and learned. He doesn’t tell us about where they received their priesthood authority, or when and how they were baptized, but instead gives a sermon on why it is important to be baptized. Nephi assumes the reader already knows he was baptized and has authority."

All in all, working on The Golden Plates digital adaption gave Knaupp the opportunity to look at The Book of Mormon in a way he never had before. He hopes that the comic book versions of this sacred text will help readers, especially young readers, to be able to do the same.