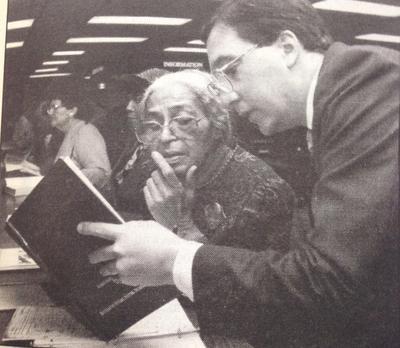 Did you know that Rosa Parks, whom the U.S. Congress called "the first lady of civil rights" and "the mother of the freedom movement," researched her genealogy at the Family History Library in Salt Lake City in 1992?

Here we have compiled other interesting pictures published in the Church News between 1970 and 1992.

This photo accompanied a feature article on Lufthansa Airlines chief pilot Dieter Uchtdorf in the Feb. 27, 1988, edition of the LDS Church News.

On March 3, 1988, Walt Disney's Donald Duck had the privilege of leading the Mormon Tabernacle Choir in a couple bars of "Zip-a-Dee-Doo-Dah" at a Tabernacle rehearsal.