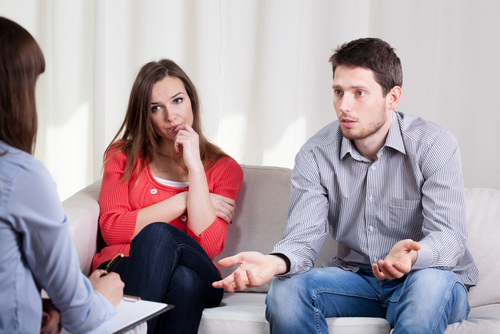 4 Communication Problems That Might Be Putting Your Marriage at Risk

As a marriage counselor, people are frequently asking me to help them with their “communication issues.” But what exactly does that mean? To address communication problems with couples in counseling, I often point to the four dangerous patterns identified by Dr. John Gottman from the University of Washington after years of research.

These are the four patterns to watch for in your communication:

We are critical when we communicate our concerns in a way that can be interpreted as personally attacking or blaming. Inevitably, concerns and frustrations in marriage expressed as criticism rise to the surface, often at a heated moment. Concerns, however, can be expressed in ways that are not viewed as a personal attack.

For example, a criticism might be: “Why didn’t you call me when you were coming home late? Didn’t you realize that I was waiting for you? You always put work ahead of me and the kids. You never think about how your actions impact other people.” Clearly, there is a concern illustrated here that may need to be expressed, but the way the concern was presented was very personally attacking and blaming. A better way to express this might be: “I was worried when I didn’t hear from you when you normally get home. I care about you and would really appreciate knowing when you are coming home.” The latter example communicates the same concerns, but in a much gentler, less critical way that does not focus on blaming, but focuses on expressing feelings.

We are contemptuous when a feeling of resentment fuels the way we feel and communicate. We may be mean, disrespectful, sarcastic, etc. We take criticism to another level with contempt. However, unlike criticism, there are no healthy alternatives to communicating with contempt. We have to completely eradicate it from our communication.

An example of contempt is: “You are so lazy. I was working hard all day and I came home to a house that looks like a bomb went off. If you were not such a slob and thought about someone other than yourself once in a while we wouldn’t have so many marriage problems.” Contempt is the most dangerous communication pattern in a marriage. My experience working with couples has been that if contempt is present, then the relationship problems likely extend far beyond communication issues.

This is the most common of the four dangerous communication patterns that I address in counseling. It is human tendency to defend ourselves when we feel accused, attacked, or when we feel a need to clarify something. For example, if our spouse starts to express a concern and we recognize some error, misunderstanding, or misrepresentation in something they are saying, we often jump in to “correct” what they are saying. This is a sure way to start an argument.

The problem with this defensive interruption is that it sends the message to our spouse that we are not listening to what they are saying or that what they are saying is not important. A better reaction would be to listen, avoid the temptation to interrupt, clarify, or defend ourselves, and perhaps take personal responsibility (even if we don’t feel it is entirely our fault).

Stonewalling is just what it sounds like—building a wall to avoid our relationship problems. Two of the most common reasons we stonewall are either we are uncomfortable and don’t want to face the issue, or we use conflict avoidance as a weapon to “one-up” the other person. Problems tend to accumulate if they are stonewalled and the result is often a big blowup down the road. Stonewalling never solves problems—they will inevitably come back to haunt us later. We need to recognize that it is essential for us to find a way to talk, listen, and validate each other’s feelings rather than avoid the issues.

Can you imagine how wonderful conversations would feel if criticism, contempt, defensiveness, and stonewalling disappeared in your marital communication? You could talk about anything and not worry about how your spouse will react. It can happen, but it can be difficult to overcome communication problems on your own. Years of these problems occurring and the loaded emotions that are projected from any of the illustrated negative interactions make it very challenging to be objective about the problems in your own relationship. This is why it is important to get help from a skilled professional. I recommend seeking assistance from a licensed marriage and family therapist, as it is the only counseling profession that requires extensive training and experience treating relationship problems. You don’t have to live with communication problems in your marriage. Get help. Counseling works if you give it an honest shot. Your kids deserve it, your spouse deserves it, and you deserve it.

Is your marriage at risk? Take a quiz on the Swinton Counseling website to find out.

Relationship expert Jonathan Swinton is a practicing Licensed Marriage and Family Therapist and owner of Swinton Counseling in Utah: 801-647-9951, www.swintoncounseling.com.