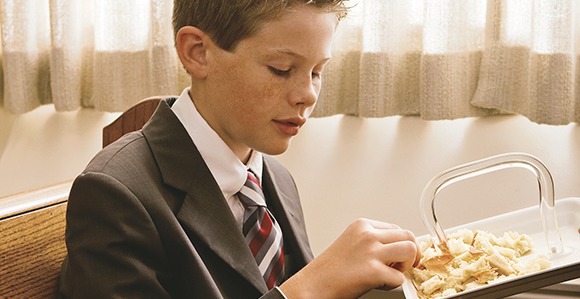 4 Meaningful Ways to Think About the Sacrament Differently

Each week we take within ourselves, both literally and symbolically, Him who is the Bread of Life and the Living Water. As the Nephites of old we have the opportunity, one by one, to partake of the physical tokens of His sacrifice.

Elder L. Tom Perry said, “Partaking of the sacrament provides us with a sacred moment in a holy place.”

Here are 4 meaningful ways to think about the sacrament that will help us have sacred moments in holy places.

1. Significance of Passover and Unleavened Bread

Jesus instituted the sacrament at the end of a Passover Feast as he broke bread and declared, “This is my body.” Had we been Jews living at that time, we would have understood the significance of His statement because of the particular bread He used to represent Himself.

During Passover, only unleavened bread could be used (or bread without any leavening agent, such as yeast), the same type of bread used for all grain sacrifices offered in the temple.

Bread was leavened in those days by adding some of the old, fermented dough to a new batch of dough. This caused the bread to rise, but would eventually cause it to sour and rot. Leavening was thus seen as a symbol of pride, sin and spiritual decay. Only Jesus could rightfully compare Himself to unleavened bread, completely free from contamination or decay.