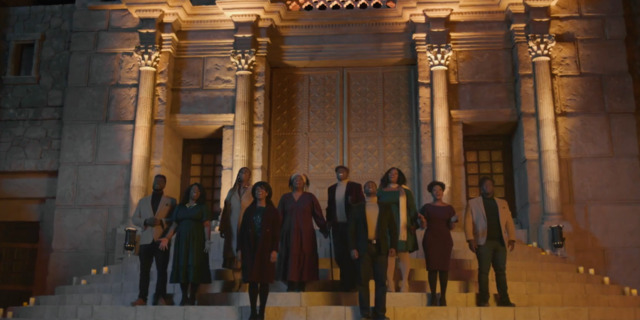 If you’re looking for a way to spend your Sabbath evening, sit back and enjoy what will look like ancient Jerusalem celebrating the Christmas season.

This Sunday, December 13, at 6:00 p.m. (MST), BYUtv will air a two-hour Christmas special, “Christmas with The Chosen.” The holiday special will feature traditional and original Christmas carols hosted by The Chosen series creator Dallas Jenkins. Here are just four reasons to tune in.

1. The Original Pilot Episode from The Chosen

Before audiences fell in love with the depictions of the followers of Jesus Christ through the multi-season series The Chosen, Jenkins pitched the series through a holiday-themed pilot episode, “The Shepherd.” The episode is based on Luke 2 and depicts the Savior’s birth. The episode will be shown as part of the celebration.

► You may also like: Director of The Chosen discusses the process of casting the role of the Savior

2. A Performance from The Bonner Family

The Bonner Family is just one of the musical groups joining the special, performing “O Holy Night.” In a video prior to the event, Jenkins asks the family why they chose to perform this song in particular.

Yahosh Bonner responds, “We think about getting gifts and this is the Christmas season, but the greatest gift that we could have ever received is the gift of the Savior, Jesus Christ. And I think as we get older we realize, ‘Wow, Christmas is not so much about what we get, but what we can give, and Christ gave it all.’”

Season 2 of The Chosen will be filmed at the set replica of ancient Jerusalem built by The Church of Jesus Christ of Latter-day Saints in Goshen, Utah. The set replica has been the setting for Bible Videos and Book of Mormon Videos. The two-hour special will include several scenes and videos shot at the Jerusalem set.

4. A Performance from The Piano Guys

The Piano Guys will also perform from Goshen. This is a return to the Goshen set for The Piano Guys, who filmed another Christmas song on the set in 2012, “O Come, O Come, Emmanuel.” In a video, Steven Sharp Nelson explains how it was a joyous occasion to return to the location where they had previously had “such a tremendously spiritual experience” to film a new video, “What Child Is This.”

“‘O Come, Emmanuel’ is a struggle about Israel needing to be ransomed. ‘What Child Is This?’ is staring at this baby in a manger thinking . . . ‘What is the meaning of this? . . . Where it switches from minor to major in this song is that moment where you feel the discovery happening and flowing through you . . . and feeling that, ‘Hey, this is going to work out. Even though I’m looking at the manger and this baby in poverty, how could this be the King of all of us—and yet somehow, it’ll make sense one day.’”

The Chosen is the first-ever-multi-season TV show about the life of Jesus. Created outside of the Hollywood system, The Chosen allows us to see Him through the eyes of those who knew him. No matter where you are at in your journey with Jesus Christ, this TV show is for you. Available at DeseretBook.com.

Christmas Byutv The ChosenChristmas,Byutv,The Chosen,
Comments and feedback can be sent to feedback@ldsliving.com