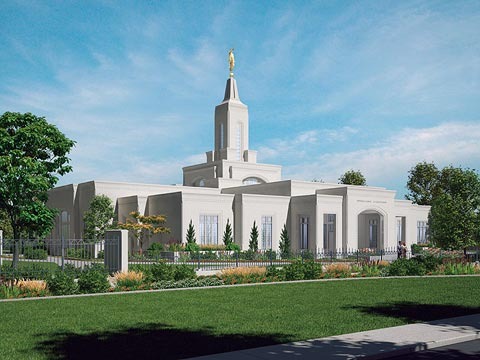 It's always exciting when a new temple is announced in general conference, so we at LDS Living wanted to give you a quick update on five temples being built around the world. Thanks to ldschurchtemples.com, we were able to find the latest construction photos for all temples to compare to the artist's rendering. Check out the status below for the Córdoba Argentina Temple, Fort Lauderdale Florida, Philadelphia Pennsylvania Temple, Sapporo Japan Temple, and Trujillo Perú Temple.

Attaching stone to exterior; anticipated to be completed in 2015

As of May 2013, the exterior walls of the Córdoba Argentina Temple have been covered in an insulating block. The framework for the steeple has been installed, and the concrete base has been poured. Work continues on two housing facilities being constructed alongside the temple. These new buildings will join the existing mission home and office on site.

The public is invited to visit the temple during an open house from Saturday, 29 March, through 19 April 2014, excluding Sundays. Free reservations for the open house can be made through the fortlauderdalemormontemple.org website in the coming weeks.

Exterior walls being poured; anticipated to be completed in 2016

As of August 2013, the majority of concrete has been poured for the substructure of the Philadelphia Pennsylvania Temple complex, which includes an underground parking facility.

As of June 2013, the framework for the steeple of the Trujillo Perú Temple has been installed atop the reinforced cement exterior walls.

The Trujillo Perú Temple will be the second temple built in Peru, following the Lima Perú Temple.

Want to know about the construction status of other temples such as the Rome Italy Temple or the Indianapolis Indiana Temple? Visit ldschurchtemples.com.