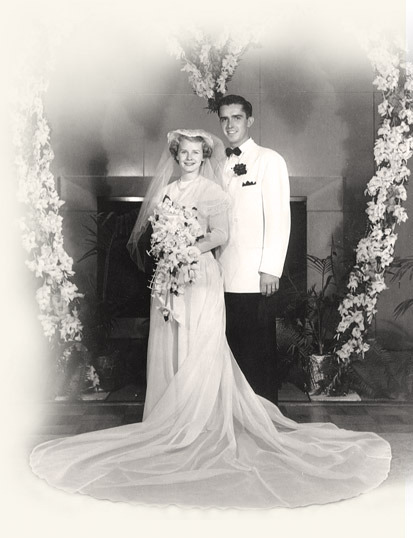 2. Elder Ballard kids that getting his wife to marry him was "the greatest sales job [he] ever did." met his wife at a school dance, where they danced for approximately 30 seconds, he said. Soon afterward, they began courting. He knew he wanted to marry her from the beginning, but, according to him, she didn't feel the same way. Elder Ballard, who had worked in car sales, added, "I kid her now that getting her to agree to marry me was the greatest sales job I ever did."

Elder Ballard and his wife, Barbara Bowen Ballard at their wedding, 1951

3. In the 1950s, the Ford Motor Company recruited Elder Ballard to be the first Edsel Ford car dealer for Salt Lake City. The company had spent over 200 million dollars producing the vehicle, named after the father of Henry Ford II, in the hopes that it would be a huge marketing success. After praying about it and seeing the car in person, Elder Ballard had a clear impression that he shouldn't sign the franchise, but he went ahead and did it anyway. The company incurred huge losses, an event that resulted in Elder Ballard's darkest days in business, he notes. He often refers to that story as a moment in his life when he realized the importance of listening to the Holy Ghost.

6. Once he was released from serving as bishop, Elder Ballard learned to truly appreciate wives and mothers, as he relates in this humorous tale of keeping six of his children quiet in sacrament meeting:

As a young father, I learned the demanding role of motherhood. I served as a counselor and then as bishop for a period of 10 years. During that time, we were blessed with six of our seven children. Barbara was often worn-out by the time I got home Sunday evening. She tried to explain what it was like to sit on the back row in sacrament meeting with our young family. Then the day came that I was released. After sitting on the stand for 10 years, I was now sitting with my family on the back row.

The ward’s singing mothers’ chorus was providing the music, and I found myself sitting alone with our six children. I have never been so busy in my whole life. I had the hand puppets going on both hands, and that wasn’t working too well. The Cheerios got away from me, and that was embarrassing. The coloring books didn’t seem to entertain as well as they should.

As I struggled with the children through the meeting, I looked up at Barbara, and she was watching me and smiling. I learned for myself to more fully appreciate what all of you dear mothers do so well and so faithfully!

-->Read about how women fit into God's plan in Elder Ballard's book, Daughters of God.

We wish this incredible man the best as he celebrates his 86th year!

Don't miss powerful gospel insights from Elder Ballard in this eBook bundle--60% off for a limited time!

Our Search for Happiness

Learn more about Apostasy, the need for the Restoration, the priesthood, and benefits of living the gospel in this mission-library approved book!

When Thou Art Converted

Get 11 valuable keys to help us stand as witnesses of God in this companion volume to Our Search for Happiness.