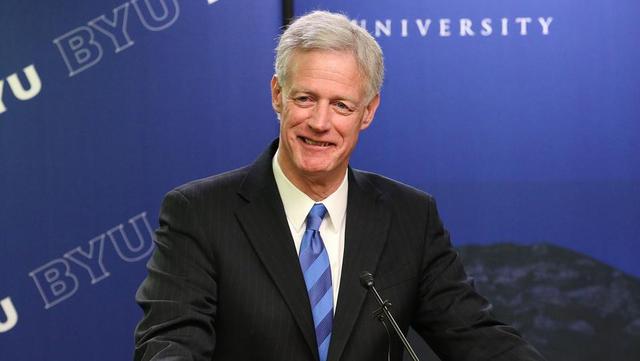 In 2010, President Worthen was called to be an Area Seventy at the age of 53. Area Seventies give part-time voluntary Church service within their assigned geographic areas and support area presidencies in international areas.

2. He served a mission for the Church in the Monterrey Mexico Mission.

3. He does a surprisingly good Tom Jones imitation:

4. He was a Supreme Court Clerk.

President Worthen was a clerk for Supreme Court Justice Byron R. White. He also clerked for Judge Malcolm R. Wilkey of the U.S. Court of Appeals for the D.C. Circuit court and practiced law from 1984-1987 in Arizona for Jennings, Strouss & Salmon.

President Worthen has always loved sports. He was the Faculty Athletic Representative to the NCAA for 4 years, co-captain of his varsity basketball team during his time at the College of Eastern Utah, where he earned his associate’s degree, and a Jr. Jazz Youth Basketball coach.

6. He is an expert in Native American law.

President Worthen has a prolific repertoire of published papers and presentations related to Native American Law. One of his greatest research interests is Federal Indian Law, which is also a class he taught at BYU. A few interesting titles from his published works include “Eagle Feather and Equality: Lessons on Religious Exceptions from the Native American Experience” and “The Grand Experiment: Evaluating Indian Law in the ‘New World.’”

When he was younger, President Worthen worked as an underground coal miner in the Plateau Mine in Wattis during the summer months in 1977 and 1978. It's hard to picture this clean-cut president with soot on his face, but what a unique experience!