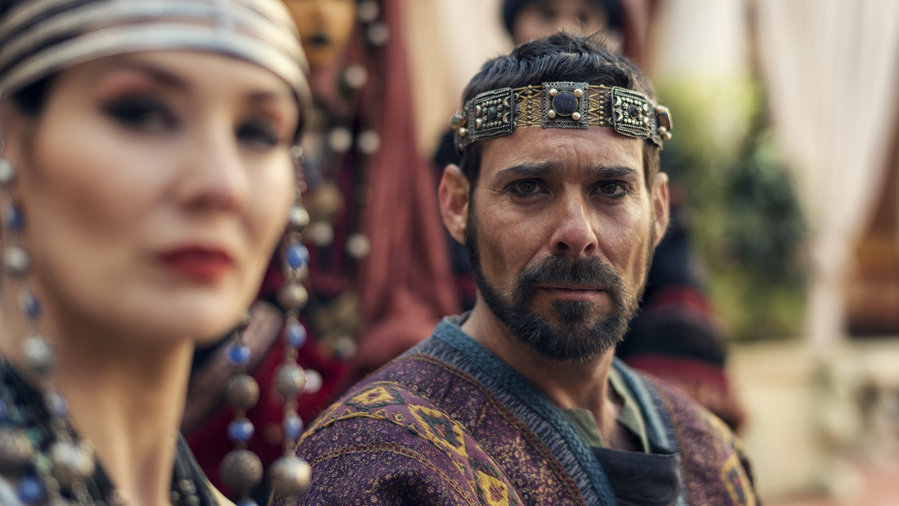 This Easter, NBC is making a bold move: they're premiering a brand-new TV mini-series based on the Bible—in primetime. The program, called A.D. The Bible Continues, is a follow-up to the popular series The Bible, which was viewed by tens of millions of people across the United States two years ago. A.D. picks up where that series left off, portraying the events that followed Christ's crucifixion in beautiful and breathtaking detail.

Why should Latter-day Saints watch a Bible show that wasn't made by the Church?

Eric D. Huntsman, Associate Professor of Ancient Studies at BYU, explains: "I think one of the reasons why Latter-day Saints are hesitant to use other media from outside in their study of the scriptures is because we’re used to just using our own material that the Church or BYU has provided for us." However, he continues, "There’s a lot of good stuff out there that we can use to supplement our study of the scriptures." Though he's clear that such materials should never take the place of trusted resources, he believes A.D. to be a good addition. "It will engage people and give them wonderful images of what the time period was like, what the characters were like, and get them excited about the Bible stories so that hopefully with their families or in individual study, they’ll go back and actually read it."

Another great reason to watch is to support faith content in primetime. "When you think of all the other media that we happily watch and listen to that don't have much redeeming quality or content at all," Huntsman says, "why wouldn’t we want to watch good things about Jesus and His Apostles?"

How is the A.D. series different from the Church's Bible videos?

"This isn’t like our Bible series in the Church," Huntsman says, "where we simply have the narrative of the King James Bible dramatized." The objective of that series, he adds, "is so you can use clips in your classes, in your Sunday School class, or in family home evenings, and have your Bible out and follow." However, A.D. is different. It emphasizes the text in the opposite way: "This is meant primarily to entertain, and then bring people to the text."

How accurately will the Bible stories be portrayed?

While there isn't anything blatantly inaccurate to Biblical texts, as an expert in ancient scripture, Huntsman says, "there are some little pieces to help you understand peoples’ motivations and actions, which a strict historian or student of the Bible might say, 'that’s not necessarily what happened.'" He does note, though, "It’s trying to be true to the Spirit."

One Latter-day Saint at a pre-screening of the first episode also mentioned, "I was a little surprised that the producers thought that it was more important to portray ethnic diversity among Jesus' inner circle than historical accuracy. Perhaps this casting decision was intended to imply that His gospel is for all of God's children."

What difference should Latter-day Saints expect between this portrayal and LDS portrayals of Bible stories?

"One thing [Latter-day Saints] need to be prepared for, as is the case with most dramatic presentations of Bible stories, is it doesn’t use the King James Bible. And so that may sound a little unfamiliar to them."

The reason for this choice, he explains, is to make A.D. more engaging for a modern audience.

How does this Bible series compare to recent Hollywood interpretations of Bible stories like Exodus: Gods & Kings and Noah?

"It has more to do with the personal convictions of the producers and the directors," Huntsman says. "They really are fervent believers in Jesus Christ, and even though they’re trying to present it in a general way so people can watch it, doesn’t change their personal commitment to the Bible and to the Savior.

"People watching this cannot avoid picking that up. They will know that while this is meant as entertainment, it certainly has an important secondary purpose, which is to share their faith. That didn’t necessarily come out in some of those other recent movies."

What have other Latter-day Saints said about A.D.?

"As a Mormon, I think this series will add to my existing knowledge and open doors to some important perspectives about the Bible and the life of Jesus. I am grateful these producers have made such great stories. I am pleased we are seeing some Biblical oriented (faith-promoting) programs on television instead of all the sleazy stuff that is so predominant on TV these days."

"I had the privilege of watching the first episode of A.D. at a special screening at the U.S. Capitol Visitor's Center on Monday. It was a very moving experience and I look forward to seeing the entire series this spring. The producers consulted a variety of biblical scholars to ensure a generally high level of historical accuracy."

"I'm LDS and I worked for two years in Network Advertising and Marketing at NBC in Burbank, CA. I produced the on-air promos for Jesus of Nazareth when it first aired on NBC. I agree that most of the 'Hollywood' media is anti-religion, but I applaud NBC for showing A.D. . . .

"I thank [producers] Roma Downey and Mark Bennett for their efforts in making the Bible more accessible to millions who don't or won't take the time to read it. This is truly a time when LDS and other Christians can celebrate their common beliefs and their love of Christ rather than indulging in petty differences. . . . Let's not worry so much about what parts of the series might differ from our own views of the Biblical story, but rather rejoice that a major TV network is showing us the story of Christ and his followers in prime time! I'm looking forward to A.D.!"

How can Latter-day Saint families use A.D. in a faithful way?

Of the first episode, Huntsman did note: "It’s not explicit with the Crucifixion, but there are scourgings and there is a crucifixion, so you wouldn’t want your tiny, tiny children to watch it."

However, he  suggests using the series as part of weekly FHE lessons, and as a way to start faithful discussions about the Bible. "Just watch it with your children, and don’t correct every tiny little thing as you’re going through it." Then, he says, after watching an episode on Sunday, talk about it the next night at the start of FHE.

"It might be a wonderful way to get our children and the rest of families into the scriptures," he says. "After they’ve been able to enjoy it, appreciate it, feel it, and experience it on their own, maybe 24 hours later in a teaching context, that’s when you go through and say, 'This is the important message, and yes this is in the Bible. Yeah, we don’t actually know that Peter acted and looked like that, but isn’t it great that Peter was a witness of Jesus Christ?'"

It's also a time when parents can correct any errors they saw in the representation. "That [there are errors] doesn’t mean it’s not a good thing, [or that] we shouldn’t watch it. It means we should always be reading the scriptures and not counting on someone else’s interpretations."

When and where will A.D. be aired?

For viewers in Utah, KSL will air a special about the making of the series on Sunday, April 5th at 4pm (following the final session of conference).