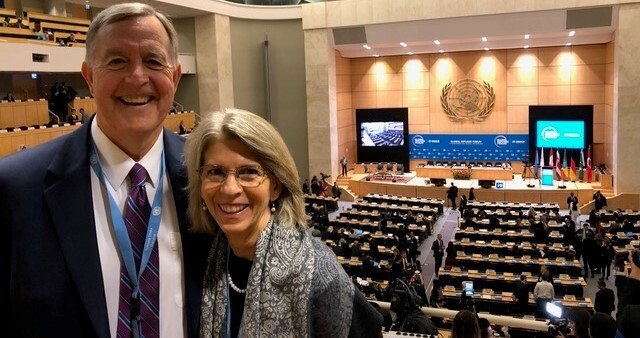 8 women who have spoken at the UN from the Church’s Primary, Relief Society, and Young Women General Presidencies

Did you know that at least eight female leaders of the Church have either spoken at a United Nations event or held a leadership position in the organization? When you consider the United Nations’ five main areas of focus, the Church’s desire to be involved shouldn’t come as a surprise:

Female leaders of the Church have delivered messages interlaced with testimony and doctrine to the UN, often testifying of families and the value of women. Their strong leadership skills and love for God’s children have enabled them to make powerful contributions to this world stage. Read below for an inspiring taste of Latter-day Saint women’s involvement with the UN. First, let’s begin with the most recent occurrence: Sister Carol F. McConkie.

Sister McConkie served as First Counselor in the Young Women General Presidency from 2013 to 2018. In 2019, she and her husband were called to serve as government affairs missionaries for the Church at the United Nations in Geneva, Switzerland. 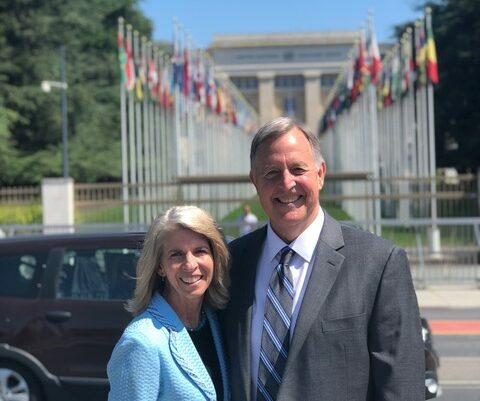 As part of that work, Sister McConkie joined the NGO Committee on the Status of Women—a cause no doubt close to her heart after serving in the Young Women organization. Deseret News writes that the committee promotes gender equality and the empowerment and defense of the rights of women and girls worldwide.

After a time serving as a member of the committee, Sister McConkie was recently elected as vice president. Her husband, Elder Oscar W. McConkie III, credits the election to Sister McConkie’s ability to convey her strong values with love.

“She’s able to connect with others as brothers and sisters, no matter what their persuasions or opinions are. And yet, she’s bold in her beliefs and she gives wise counsel,” Elder McConkie told Church News.

Sister McConkie says she is humbled by this new opportunity.

“It’s really a wonderful opportunity to meet other women with different perspectives and different beliefs, amazingly different backgrounds, and find common ground and come together to work together,” she says.

One of the projects she is currently working on is preserving gender terminology.

“The language we use is important, especially when we’re petitioning for those things that we have need of. . . . [Women and girls are] the most vulnerable group, and so we want to be able to have the language to facilitate and to advocate for them.”

Read more at Church News about that project and other work the McConkies do at the United Nations.

Sister Sharon Eubank’s name is one some Latter-day Saints may already associate with the UN. 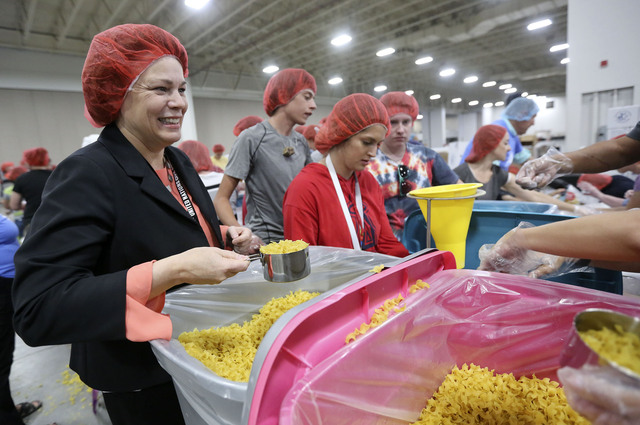 Sister Eubank is the current First Counselor in the Relief Society General Presidency as well as the director of Latter-day Saint Charities, which is an accredited non-governmental organization to the UN. The Latter-day Saint Charities blog provides updates on its engagement on the national level, including a recent seminar series where Sister Eubank presented on issues pertaining to the family.

Another example of Sister Eubank’s involvement was an address she gave at the Second Global Summit on Religion, Peace, and Security in 2019. Church News wrote that she referenced the Church’s pioneer history as refugees and spoke about the importance of reaching out to those in similar conditions today. She also highlighted the power of religions and governments working together.

“The good that religion can do, especially when it comes to . . .  sustainable development goals, is amplified if religious groups work in partnership with each other, and with governments and non-governmental actors.”

To read more of Sister Eubank’s remarks at the conference see Church News.

In August of 2019, the 68th United Nations Civil Society Conference was held at the Salt Palace Convention Center in Salt Lake City. Sister Tracy Browning, a member of the Relief Society Advisory Council, presented at the conference.

According to the Church News article about the event, the UN stated that the family is a natural and fundamental group unit of society in the 1948 Universal Declaration of Human Rights. Sister Browning pointed out that Utah is a great place to discuss building sustainable societies because the state is culturally very focused on families. 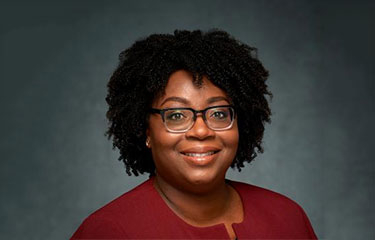 “I think the UN, in their mission, is always looking to hold hands with allies and like-minded organizations to bring good things about,” she said.

She later spoke about the importance of people reaching out to their neighbors, which will add value to communities at large.

“We feel that it is our privilege and duty to love our neighbors and to help our neighbors in any way that we’re able,” Sister Browning said. “In big ways and in small ways.”

Read more about the conference and Sister Browning’s presentation at Church News.

► You may also like: ‘There is no expiration date for revelation’: What Sister Tracy Browning shared on evolving revelation during BYU Women’s Conference

The UNICEF Humanitarian Action for Children event in 2019 wouldn’t have been complete without representation from one of the largest children’s organizations in the world—the Primary.

Sister Joy D. Jones, who was the Primary General President at the time, spoke during a panel to advocate on behalf of all the world’s children in providing basic life-sustaining resources and educational opportunities.

“As a faith-based organization, we believe all people are children of God, and we offer assistance without regard to race, religious affiliation, or nationality,” she explained during the panel. “We welcome collaboration with partners around the world to sustain progress and development for all children, especially those who are displaced.”

You can watch the entire event on UNICEF’s YouTube channel.

Just one week after her call to be the Relief Society General President, Sister Jean B. Bingham spoke at the UN in New York City. She was a part of the panel discussion “Focus on Faith” and spoke on the role of faith-based organizations in refugee settlement and integration.

“While our beliefs and convictions may vary, we are united with other faiths in our commitment to a higher cause that transcends our personal interests and motivates us to give of our substance, our time, and our energies on behalf of our fellow men and women,” she said.

Newsroom writes that Sister Eubank was also in attendance at the panel and was inspired listening to President Bingham.

“To hear her speak with these panelists and reinforce each other's work, it was just moving to me. I sat there in the audience, and I just had chills to think, ‘That's the Relief Society!’” Sister Eubank said.

You can watch President Bingham’s full remarks in the video below.

Sister Neill F. Marriott served as Second Counselor in the Young Women General Presidency from 2013 to 2018. In 2016, she spoke at the United Nations 60th Commission on the Status of Women in New York City. She was part of a panel called “Fostering World Leadership in Young Women Starting with the Role of the Mother.” Deseret News reported that in her remarks she said religion as a whole and the Young Women programs in particular help teenage girls gain self-worth and confidence and grow into leaders. 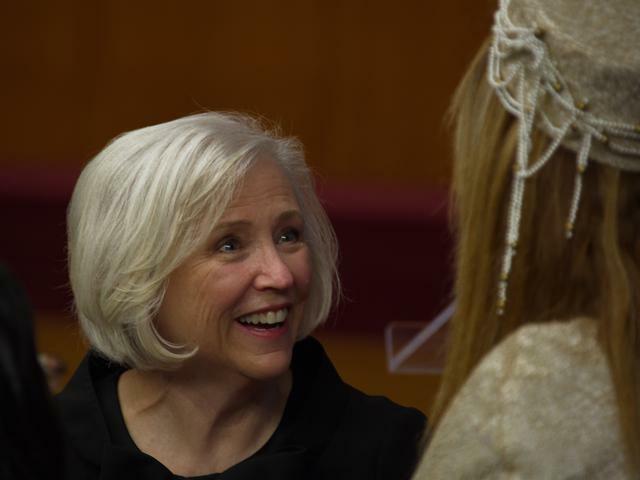 Newsroom’s coverage of the event reported that Sister Marriott also discussed how stronger families lead to a stronger world.

Read the full report at Newsroom.

► You may also like: How serving missions as young adults prepared these female General Presidency members to lead

When Sister Julie B. Beck was serving as Relief Society General President from 2007 to 2012, she met with head of UN Women, a department that consolidates all efforts at the UN regarding women and children.

During the meeting, President Beck was asked to explain her leadership role.

“I work for a small organization of 6 million women, and we’re in 175 countries. We have at least 33,000 grass-roots groups, each of them led by a president and some people who assist her,” President Beck said, according to Church News.

The UN leader was amazed by those statistics. President Beck further explained that the Relief Society seeks out those who are in need and provides relief. When the UN leader asked how that is accomplished, President Beck alluded to the simple guidelines given in the Church Handbook.

“Those guidelines are sent out,” she continued. “They all have them, they know how to organize, and mostly I just travel around and tell them they are doing a great job.”

Read more about Sister Beck and her experience at Church News.

After serving in the Relief Society General Presidency, Sister Sheri Dew served as the White House delegate to the Commission on the Status of Women to the United Nations. In 2003, she gave a talk at Brigham Young University called “You Were Born to Lead, You Were Born for Glory” in which she shared some of her experiences. For example, she said:

This spring I spent two weeks at the United Nations as a White House delegate to an international commission. As I listened to women from around the world debate complex social problems, I didn’t hear them raise one issue that couldn’t be solved by living the gospel. Not one.

Later on in the BYU address, Sister Dew shared a powerful experience she had speaking on the family to the United Nations:

This summer I was invited to speak on the subject of the family to a gathering of United Nations diplomats. I agonized over what to say to such a diverse group. In the end I simply shared my personal experience. I explained that my parents had taught me as a child that personal virtue was essential for a happy marriage and family and that in my youth I had made promises to God that I would live a chaste life.

I then acknowledged that I was about to turn 50 and that, though I had not yet married, I had kept my promise. “It hasn’t always been easy to stay morally clean,” I admitted, “but it has been far easier than the alternative. I have never spent one second worrying about an unwanted pregnancy or disease. I have never had a moment’s anguish because a man used and then discarded me. And when I do marry, I will do so without regret. So you see,” I concluded, “I believe a moral life is actually an easier and a happier life.”

I worried about how this sophisticated audience would respond to a message about virtue and abstinence, but much to my surprise they leapt to their feet in applause—not because of me but because the Spirit had borne witness of the truth of that message.

You can read the rest of Sister Dew’s remarks here.

Do you know of any other times a female Church leader has participated in the UN? Let us know at storytips@ldsliving.com.