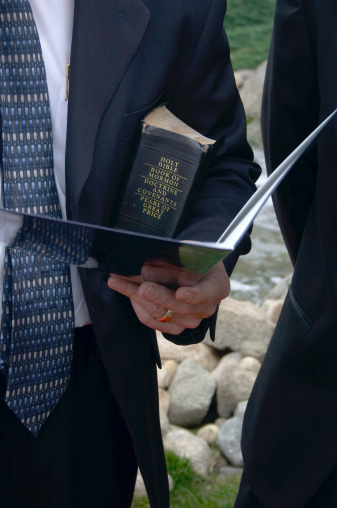 As a lifelong member of the Church who’s lived in a few different geographic regions, I thought I’d heard it all. I’ve fielded questions about polygamy, pioneers, dancing and Donny Osmond. (Have I also mentioned that I’m not Amish?) But then we asked you, our readers, about misunderstandings you’ve encountered about your faith.

I hadn’t heard the half of it.

We were amazed by the number of stories we heard about well-meaning friends and neighbors who didn't quite have their facts about "the Mormons" straight.

From carbonated soda consumption to having horns and tails--and pulled straight from the real-life encounters of our readers—here are a few more things people get wrong about us Latter-day Saints.

Except that it isn’t. Most Latter-day Saints have heard this before, even if it hasn’t been said to their face. Let’s clear this error up.

By definition, a cult is “a small religious group that is not part of a larger and more accepted religion and that has beliefs regarded by many people as extreme or dangerous” (Merriam-Webster, emphasis added).

There are a few problems with classifying Mormonism as a cult. First is that we’re no “small religious group.” In fact, we’re 15 million members strong—and more than half of those are outside the United States.

Second, we are also part of a “more accepted religion”: Mormons are Christians, in that we believe in God and His Son, Jesus Christ.

Well, where are yours? Actually, even though I’ve heard this before, I didn’t think anyone actually believed it—at least not today. But several LDS Living readers shared their experience with this myth:

“Did you know that Mormons have horns? True story! Back in 1977, I was talking to a sailor at Newport News Shipbuilding and Dry Dock who honestly thought that.”

“I'm middle-aged and heard the horns and tail story from my mother, who encountered people who wanted to see hers when she was a girl.”

“A kid in third or fourth grade said he heard that we have horns and a tail. We apparently keep our tail hidden and file down our horns so people won't know about them. Even at 8 or 9 I found that so funny that I wasn't mad or embarrassed.”

"I had a guy on a plane get really really surprised to realize that the person he had been chatting with for a couple of hours (me) was a Mormon, because he sincerely believed that we all had horns, and I did not. No joke--an educated businessman in the '90s who was heading to Park City to ski, and he was not kidding."

"I moved to Oklahoma when I was in second grade. The other children in my class asked to feel my horns. I guess they thought that Mormons had horns that they had to file down to fit in. I let them feel my head, no horns."

The important thing to remember: Mormons are people, just like everybody else. Right down to our lack of horns and tails.

Don’t panic if you see me order a root beer or an Italian soda—Mormons can drink carbonated beverages. (Choose the Sprite, anyone?)

This misunderstanding doubtless comes from some Latter-day Saints who don’t drink caffeinated sodas. While we are counseled to avoid coffee, imbibing caffeine in other drinks is left for each individual to decide for his or herself.

4. "Mormons have to wear name tags and can only ride bicycles."

If this were true, my commute to work would be a lot longer, but at least I’d be in a lot better shape.

You can easily guess where this misunderstanding comes from: young elders and sisters riding two by two on their missions. Given that the missionaries are the first (and sometimes only) exposure many people have to Latter-day Saints, stories like this from an LDS Living reader might not be too surprising:

“When I was investigating the Church, my very good friend Doug pulled me aside and asked me to not get so involved with the Mormons that I would give up driving my car. I said, ‘What are you talking about?’ He went on to let me know that Mormons have to wear nametags and can only ride bicycles. Strangely enough, for 6 months of my mission in Japan I drove a car.”

5. "You don’t read the Bible; Mormons have their own Bible."

I’m glad you told me this—you just saved me a lot of reading. Because the truth is, Latter-day Saints do read the Bible and consider it scripture. In fact, this year, Sunday lessons around the world will be teaching about the New Testament. Last year? We studied the Old Testament.

-->Related Reading: Have You Read the Entire Bible?

In addition to the Bible, though, we also study other scripture which we believe complements (and does not replace) the Bible.

These include the Book of Mormon (where our nickname, “The Mormons,” comes from), modern-day revelation contained in a book called the Doctrine & Covenants, additional scripture including the book of Moses that’s contained in something we call The Pearl of Great Price, and the words of our modern prophets. It’s this belief in continuing revelation from heaven that is part of what sets Mormons apart from other Christian religions.

Doing my hair would certainly be a lot harder if this myth were true. Thankfully, mirrors are definitely something Mormons can use.

This misunderstanding doesn’t actually come from confusion with a vampire legend, like you might think. An LDS Living reader who heard this myth explains:

“It came from the person seeing missionaries backing. . .up [a car] and the assumption that they did this because they could not use their rearview mirrors or something like that. It would seem they could backup without the mirrors, but I don't think the person thought of that.”

7. "Isn't that the religion that has five wives?"

I should say not. But as an LDS Living reader pointed out, "Most of the comments I get as a recent convert are 'Isn't that the religion that has fives wives?' Very frustrating how uneducated most people are."

It seems like there's been a resurgence of this misunderstanding with the popularity of reality TV shows like My Five Wives and Sister Wives. Admittedly, Latter-day Saints have a history with plural marriage, but that practice officially ended in 1890. The Church of Jesus Christ of Latter-day Saints is not associated with the splinter groups that are the focus of these shows, and today we do not practice or promote plural marriage.

Because I want to--I feel it makes me more confident and beautiful. (But to each their own.) My decision to wear mascara is an entirely personal one that has nothing to do with my religion, even if that's what some people mistakenly think:

"In high school, I was told that if I was Mormon I was not allowed to wear makeup and that I was supposed to wear a long, black dress. When I told this girl she was mistaken, she insisted that she was right and told me, 'Go home and ask your mom.'"

"I've also got: we aren't allowed to color our hair, paint our nails, or wear makeup, [and] we make our own clothes."

This sort of misunderstanding doubtless stems, once again, from confusing Mormons with the Amish .

9. "Why do you put holes in your underwear?"

Maybe I've taken to heart the adage, "Use it up, wear it out, make do, or do without." But I definitely consider underwear with holes in it "worn out!"

Here's what one LDS Living reader had to say about this misconception:

"I work in healthcare, and when I was a student, one of my mentors at a fieldwork site kindly and respectfully asked me if she could ask me a question about being LDS. I said okay. Her question was that she had heard LDS people put holes in their underclothes and she was curious why! I corrected her misunderstanding, explained where I thought that misconception evolved from, and used that to teach her and educate in case she ever had an LDS patient in the future."

But what could be the reasoning behind this "myth"? Another reader shared their experience:

"A few months ago my Chiropractor asked me if it was true that our 'underwear' had holes in it in the same place Joseph Smith was shot."

Myths about the temple garment are plentiful--and luckily, the Church just recently released a video to clear up misunderstandings like this one:

Have you had an encounter with incorrect beliefs about Mormon doctrine or culture? Tell us about it in the comments.