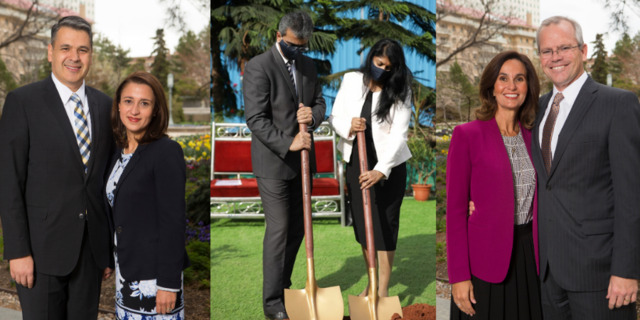 On Friday, January 8, 2021, Church News released a list of 105 new mission presidents and companions who will begin their service in July 2021. Included in the list are a General Authority Seventy, a member of the Primary General Presidency, a former NFL player, and parents of an Olympian.

We celebrate each of the 105 couples in their new callings and are grateful for their service, dedication, and sacrifice. Here are the names of just nine couples on the list that you might recognize as you peruse the list.

Elder Juan Pablo Villar was called to be a General Authority Seventy in March 2018. According to Church News, Elder Villar personally knows the benefits of missionary work. He learned about the Church as a teenager when his older brother announced he had joined the Church (without his parents’ approval) and had decided to serve a mission. A seed was planted, and after meeting with the missionaries himself, his older brother who was serving in a neighboring mission received permission to baptize his brother.

► You may also like: Are General Authorities normally called to serve as mission presidents?

Sister Lisa L. Harkness currently serves as the First Counselor the Primary General Presidency, a position she has held since March 2018. As a young woman, Sister Harkness served a Spanish-speaking full-time mission in the Louisiana Baton Rouge Mission. She served her entire mission in one branch and told Church News it helped her learn how important it is to develop relationships of trust in order to share the gospel.

► You may also like: How serving missions as young adults prepared these female General Presidency members to lead

Several Area Seventies are included on the new mission leadership list. One name readers might recognize is Elder Robert K. William, who currently serves in the Fourth Quorum of the Seventy. He recently presided at the groundbreaking for the Bengaluru India Temple, where he said the temple would be a hinge point for India, as reported by Church News.

Kelly T. Burgener currently serves as the academic vice president of Brigham Young University–Idaho. According to his biography on the BYU–Idaho website, Burgener has taught graphic design since 1990. At the 2019 Education Week on the school’s campus, Burgener gave an address titled, “All Things Denote There Is a God.”

Attendees of Education Week or listeners of the Leading Saints podcast will likely recognize the name of Robert W. Ferrell. As a former young single adult stake president and bishop, Ferrell has met with thousands of young single adults and frequently speaks about issues related to that demographic. In 2019, LDS Living highlighted three insights he shared for supporting singles in the Church.

Utah locals may recognize Justin Harding from his role as Governor Gary Herbert’s chief of staff. He assumed the role in June 2015 and held the role for the remainder of Governor Herbert’s time in office, through January 2021. Prior to that, Harding worked in the nation’s capital for about 14 years, according to Deseret News, filling the same role for Rep. Jason Chaffetz and working with two other Utah congressmen.

Gabriel Reid is a former NFL player that has been on the roster for the Chicago Bears and the Tennessee Titans. In a “I’m a Mormon” video published in 2011, Reid referenced what may have been one of the lowlights of his football career—when he fumbled a kickoff return in Super Bowl XLI. However, he also shares how football taught him the importance of not giving up and persevering.

One name that is very familiar to us here at LDS Living is that of Jeff Simpson, president of Deseret News and Deseret Book. He has shepherded both organizations through key transitions, including the end of the Deseret News’ Joint Operating Agreement with the Salt Lake Tribune and the challenges posed by COVID-19 at Deseret Book. Simpson made a name for himself in the Latter-day Saint world by starting Excel Entertainment, the independent film distribution company that brought you titles like God’s Army, The Work and The Glory, and The Other Side of Heaven, prior to Excel being acquired by Deseret Book in 2004.

If you’re wondering if there’s a relation between Edwin Tandiman, Christine D. Tandiman, and Olympic speedskater Jerica Tandiman, the answer is yes—they are her parents. In a 2018 Deseret News profile, Jerica Tandiman explained how her faith and her family led her to her Olympic dream.

See the list of all 105 couples at Church News.