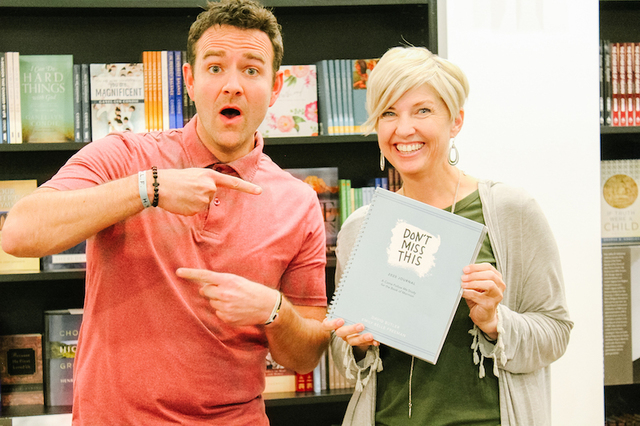 It was 2010, and Butler had been teaching his seminary class about the pioneer John Moyle, a mason best known for carving “Holiness to the Lord, House of the Lord” on the exterior of the Salt Lake Temple. Moyle worked on the temple for 20 years, walking to the site on foot even when his leg had to be amputated due to an accident.

One night in her home, Freeman, who had never met Butler at the time, had been studying the same story and thought there would be no better way to honor Moyle than to walk to the temple herself.

“Who wants to go? Who’s in?” Freeman asked a living room full of people

Little did she know that her son’s seminary teacher had the exact same thought. Although no one seemed keen on the idea at first, Freeman and Butler did a little persuading and before long, they and approximately 85 others participated in a temple walk from the Draper Utah Temple to the Salt Lake Temple.

It was on this trip that the two teachers discovered one very important thing.

“We both found out that we love the Lord, we love the scriptures, we love teaching them and we love bringing other people along,” Butler says.

That was ten years ago. Since then, Freeman and Butler have collaborated on a number of projects, including their book “The Peter Potential,” a Bible study non-profit called Multiply Goodness, and anything in between that brings people together to talk about the gospel.

One of Freeman and Butler’s most recent projects is “Don’t Miss This,” a weekly video YouTube series which highlights their favorite parts from each week's Come, Follow Me lesson. With over 80,000 subscriptions, the videos have taken off since it was launched just in time for the Church’s study of the New Testament a year ago.

But in the beginning, “Don’t Miss This” happened quite by accident. A handful of people had been asking Freeman and Butler what they were planning on doing with Come, Follow Me. After some discussion, the two decided to record a lesson and put it up on YouTube just a couple of days before the start of the year in 2019.

Two weeks later, “Don’t Miss This” had grown into a community, and over the months that followed, that community began connecting people all around the world. From single adults and empty nesters to soldiers in Afghanistan and Sunday School classes in prison, thousands of Latter-day Saints have been checking in with “Don’t Miss This” to learn about and discuss the gospel.

That element of ongoing conversation about the gospel is one of the things Freeman and Butler love most about “Don’t Miss This.” But Since Butler teaches institute at Utah Valley University and Freeman teaches both institute and seminary, neither have a lot of time to devote to creating a detailed plan for each “Don’t Miss This” video. In fact, most of it happens on the fly, with barely enough time for a weekly phone call on Monday in which Freeman and Butler talk about their favorite parts of Come, Follow Me before filming for the week.

“I think the biggest obstacle is finding a time where both of us can be in the same place at the same time,” says Freeman. “And usually . . . there is only one block of time and it just miraculously works for both of us. It’s not the same every week.”

Besides the phone call, the rest happens in the moment. While walking down the stairs to Freeman’s basement where they film, Freeman and Butler divvy out who will take what portion of each lesson. They also don’t do extra takes or edit the clips, recording two lessons at a time and changing outfits between sessions to make the videos stand out.

At times, the scale of their project can be intimidating, and even something of a marathon. When Freeman or Butler have vacations or other commitments, they have to film far in advance. But they attribute what they’ve been able to do to the faith of those who look forward to their videos each week.

“Every time I meet someone, they tell me, ‘I pray for you. And I pray for David. Please don’t stop doing this,’” says Freeman. “And I honestly attribute what we are able to do just to the prayers of people who are grateful and participating and part of this community."

Teaching on film versus teaching in a classroom has also been an adjustment for both Butler and Freeman.

“Teaching is living. It happens by being . . . in the moment. It’s fluid. And on camera you don’t have that as much,” Butler says. “You kind of . . . will bear your soul to a screen and have no response back at all.”

But teaching and learning still happens on the set. Since very little is planned out ahead of time, Freeman and Butler learn from each other by thinking on the spot and getting new insights like any teacher would in the classroom. As they’ve gone along and have grown closer to the “Don’t Miss” community and heard their stories, Freeman and Butler say they picture the faces of those they've heard from as they record.

And just as an institute class starts out a little stiff, says Butler, “Don’t Miss This” has become more natural and more heartfelt, which gives the lessons an organic feeling, almost like they were teaching in a family’s living room instead of on a screen.

Freeman and Butler aren’t the only teachers when it comes to the Come, Follow Me curriculum, though. As they teach gospel principles each week, they’ve seen the correlation of how Latter-day Saints everywhere have also been called to be teachers in their homes.

“People are becoming more confident in scripture and they are seeing more relevance in scripture, like how it can be a daily strength for them and an answer and a connection to heaven,” says Butler. “That’s what’s so cool about it.”

YouTube videos aren’t the only way Freeman and Butler have been encouraging learning and having conversations about Come, Follow Me. As a part of their YouTube series, Butler also draws free study sheets by hand to accompany the week’s lesson. Inspired by a pastor who provided a study sheet to his congregation, Butler takes about 45 minutes each week to hand draw important “Don’t Miss This” concepts for the week. 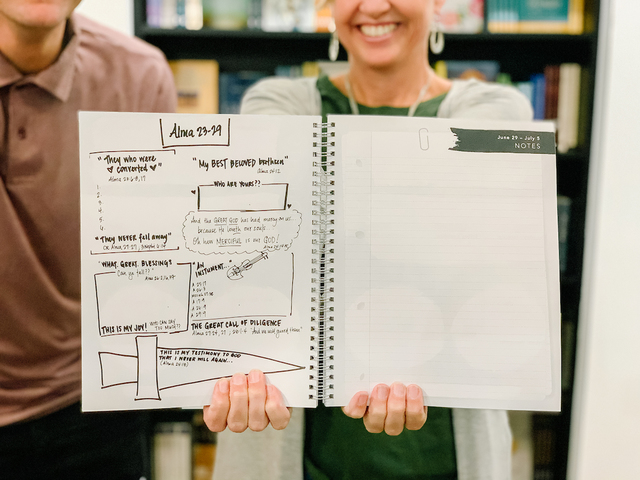 Freeman and Butler also recently released a “Don’t Miss This” podcast for those who want to study the gospel while on the go, so that between doing the laundry, going on a run, or driving in the car, anyone who wants an opportunity to tune into Come, Follow Me lessons can have the opportunity to do so.

And for those who might get overwhelmed with gospel study in general? Freeman says it’s important to focus on just getting the most out of it—regardless of how great or small that study time actually is.

“It’s not quantity, it’s quality of the time that you put in, so just open up your scriptures . . . even if it is a few minutes every day because those few minutes are going to add up and they’re going to make a difference in your life,” she says.

Looking at gospel study as a positive thing, rather than an obligation, also makes a difference, Butler adds.

“You’ll always benefit from what you are doing and you aren’t being punished for what you aren’t doing,” he says. “So, whatever it is that you are actually doing is going to be a benefit and a blessing to you. This is not an all or nothing, so whatever you need in that season and whatever you’re getting and the scriptures are supposed to be a strength to you, not a responsibility. They’re a compensatory blessing for our time period.”

As they’ve studied the New Testament in 2019, Freeman and Butler have had one goal in mind—to seek Christ in every story. Whether it’s the woman at the well, Peter walking on water, or the woman with an issue of blood, Christ is throughout the New Testament—and they’re excited to take that same approach with their Come, Follow Me study of the Book of Mormon.

“So often when we read the Book of Mormon, we feel like it is a story about Nephi or Alma or Captain Moroni or the stripling warriors, or their mothers, and what if it’s a story about Jesus?” Freeman asks. “What if we are looking for Jesus throughout the Book of Mormon and we’re watching those people teach us about their encounters with Christ, what would we learn? So that’s the first thing . . . This is another testament of Jesus Christ, so we want to see Jesus Christ in every story.”

As readers look for Christ in the Book of Mormon, they will be better able to recognize His hand in their own life, Butler adds.

“He is there on page one and page 531 and all the way through,” he says. “One of the things we want to do is watch for how He’s a God of tender mercies and the great things that He’s doing for not only those that we read about in scripture, but also to track those tender mercies and great things in our own story. . . . As you watch for it in the scriptures you start being able to see it a little more clearly in your own life. And as you then watch for it and record it in your own life, it just becomes more and more apparent how tender and how merciful and how great God actually is for me.”

In many ways, "Don't Miss This," has been a tender mercy for Freeman and Butler.

"We feel a lot like that little boy who handed the Savior his five loaves of bread and two fish, and said, 'Look, this is all we have.' And He really has taken it and He's made it more. It's His work and it's His word and the feeling that people are having with it is His Spirit...we really feel like that is happening," Butler says.

If there’s one thing both Freeman and Butler have taken away from this experience, it’s that everyone is deserving of the Savior’s love.

“Sometimes people think, ‘Oh no, I’m not deserving of His help and His grace and His love,’” says Butler. “By definition, you never earn grace and love. He comes to you because of who you are, not what you’ve done.”

And as the Savior reaches out to the one, He will lift always lift them to a better place, Freeman says. “Jesus will meet you where you are, as you are, but He doesn’t intend to leave you there.”

To study along with Freeman and Butler this year, take a look at their study guide, “Don’t Miss This in The Book of Mormon: Exploring One Verse From Each Chapter,” or their “Don’t Miss This 2020 Journal.”