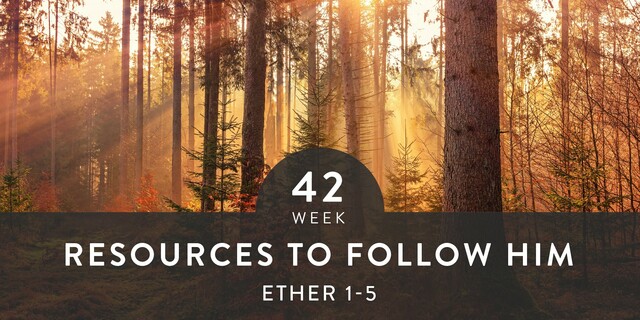 The condescension of Christ, 16 stones, and the great deep: Lessons from Ether 1-5

Editor’s note: “Resources to follow Him” curates study resources, teachings, and thoughts to deepen your study of this week’s Come, Follow Me.

A month after returning home from my time as a missionary, I was finally beginning to adjust to post-mission life but began being very critical of myself. Specifically, I felt that my gospel study and prayers were not what they had been on my mission. On the airplane home, I’d had big dreams about doing an hour of gospel study every day. After all, that seemed like very little in comparison to the three hours I had done for 18 months as a missionary. Instead, some days I only read a chapter before drifting off to sleep. I felt I was falling short across the board when I was asked to substitute for my ward’s early morning seminary class. The lesson was about Ether 2 and 3 and as I prepared, I read in Ether 2:14 where the brother of Jared has a 3-hour sit-down with the Lord because he has not been praying like he should. As the scripture puts it, “he remembered not to call upon the name of the Lord.” I found myself wondering if the brother of Jared felt like I was feeling; I imagined he was probably pretty hard on himself too, but then in Ether 3, we read the brother of Jared’s plea for forgiveness and in the end, in answer to the Lord’s question of what they would like for him to do about having light in the barges as they crossed the great deep, the brother of Jared essentially says, “Maybe you could touch these stones and they could give us light?” With complete faith he then says, “Behold, O Lord, thou canst do this. We know that thou art able to show forth great power, which looks small unto the understanding of men” (Ether 3:4).

Miraculously, the Lord does what the brother of Jared asked. His plan (which he may have felt sheepish even suggesting) is carried out as the Lord stretches forth His hand and touches the stones one by one with His finger and the brother of Jared is able to see the whole thing happen. And why does the Lord tell the brother of Jared he was able to witness this? He says, “Never has man come before me with such exceeding faith as thou hast” (Ether 3:9). As I read these verses, I knew that the Lord is quick to forgive us when we repent, He really only cares that we are trying to improve and that we exercise faith in Him. I knew in that moment that the Lord was willing to be patient with me, and as quickly as I sought forgiveness for my shortcomings or unmet expectations, He was willing to extend it.

In the book of Ether, the ocean is repeatedly referred to as “the great deep.” In many ways, I look back on that adjusting period of time after my mission as a great deep. I was trying to figure out who I was without a nametag and where I was going in my life. The Jaredites also had no idea where they were going but they trusted in the One who had carried them to the edge of the water. If you’re like me, this year has also felt like a great deep for you, but we know in whom we have trusted, and I believe if we look with an eye of faith, we will see His hand in our lives.

Below are a few of my favorite thoughts from the various Come, Follow Me resources I’ve studied this week. I hope these thoughts will be helpful to you as we are all seeking to do better and as we are all crossing our own “great deep.”

A Light in the Ark?

I mentioned that I’ve always wondered if there was some hesitancy on the part of the brother of Jared to present his proposal for how they would have light in the barges but on this week’s Sunday On Monday study group, host Tammy Uzelac Hall offered up a reason he may have had confidence in his idea.

“Let's cross-reference this story to Genesis 6:16. . . . This is where Noah is building his ark, and he's getting instruction from the Lord on what he's supposed to do for his ark. Now, in the Book of Ether, it does tell us that Jared built his ark after the manner of Noah. And so it would be a very similar ark, and when you go to Genesis 6:16, the Lord says, ‘A window shalt thou make to the ark, and a cubit shalt thou finish it above.’ So he says to him, ‘Put a window in.’ Now, that seems odd because the brother Jared can't have a window, why would Noah get a window? Now, you guys, this is so cool. Look at the footnote for the word window down below 16a, it says in Hebrew, the word for window is tsohar. Some rabbis believed it was a precious stone that shone in the ark. Seriously, how cool is that? I love that so much. 'Cause I always wondered, where did he get the idea?”

“Because Thou Knowest These Things”

On this week’s episode of Unshaken, Jared Halverson highlights Ether 3:13, which says, “Because thou knowest these things ye are redeemed from the fall.”

“Makes me wonder, what was he referring to by ‘these things,’” Halverson says. “What specific truths had the brother of Jared come to understand that brought redemption to him? Well, it all began with the sight of a finger but a spiritual finger that would someday have flesh and blood.”

This is a reminder that what we are reading is a flashback of sorts. The Jaredites were on the earth hundreds of years before the birth of Christ.

“He (the brother of Jared) was seeing a condescending Christ,” Halverson explains, later adding, “He was learning the character of Christ, omniscience and omnipotence and truthfulness and honestly because he was coming to know who the Savior was that would redeem him from the fall—that the Word of God was willing to be made flesh, to wrap our injured flesh around Him, as the beautiful song says, to come to know us perfectly.”

The scriptures continue, “Behold, I am he who was prepared from the foundation of the world to redeem my people . . . ” (Ether 3:14).

“Don’t be angry that I am sending you to the depths of the sea to bring you back up out of them,” Halverson says the Lord is essentially saying, demonstrating the fact that redemption requires condescension. “It would require a mortal finger and a mortal body to go with it. Mortal fingers to lay on weak and weary heads. Mortal fingers to touch the Nephite apostles and promise them life. Mortal fingers to break bread and pour wine and wash feet. A mortal body to suffer and to bleed from every pour, to be nailed to a cross, to have a body to abandon and to take back. It would take all of that.”

Elder Holland also said of the Savior’s conversation with the brother of Jared, “Christ was saying to the brother of Jared, ‘Never have I showed myself unto man in this manner, without my volition, driven solely by the faith of the beholder.’ As a rule, prophets are invited into the presence of the Lord, are bidden to enter his presence by him and only with his sanction. The brother of Jared, on the other hand, seems to have thrust himself through the veil, not as an unwelcome guest but perhaps technically as an uninvited one. … Obviously the Lord himself was linking unprecedented faith with this unprecedented vision. If the vision itself was not unique, then it had to be the faith and how the vision was obtained that was so unparalleled. The only way that faith could be so remarkable was its ability to take the prophet, uninvited, where others had been able to go only with God’s bidding” (Elder Jeffrey R. Holland, Christ and the New Covenant: The Messianic Message of the Book of Mormon, 23).

“Commending Themselves Unto the Lord”

Come, Follow Me this week leaves us on a bit of a cliffhanger. We’ve watched the Jaredites’ preparations but next week, we will find out what happens as they attempt to cross the oceans in these vessels or barges. Their crossing had to feel like a huge leap of faith. But Emily Belle Freeman and David Butler jumped ahead a bit at the end of Don’t Miss This citing Ether 6:4 where we read that as they climbed aboard, they commended themselves “unto the Lord their God.”

“There will be in times in our lives where we have to do that . . . commend ourselves to the Lord and say, ‘I know the fierce wind is going to come and I know the depths are going to be there and I know there’s darkness ahead and I don’t know how many days, I don’t even know where I’m going. I don’t know what it’s going to look like when we get out of this but I’m going to trust you with this thing, whatever it is.”