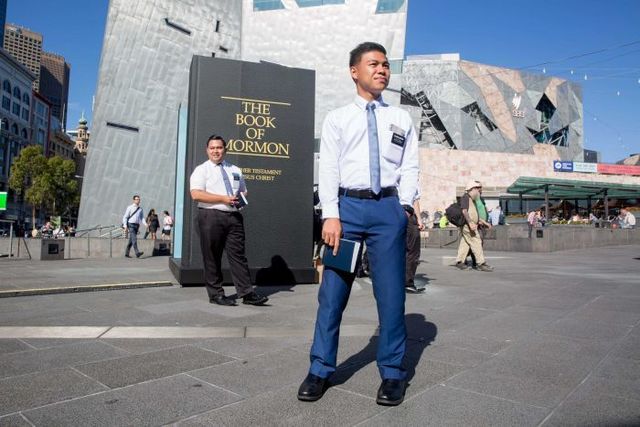 With the opening of The Book of Mormon musical in Australia, the LDS Church launched a campaign featuring clever ads in city centers, prime-time TV commercials, and a series of videos with Australian Latter-day Saints testifying of the power of the real Book of Mormon, including LDS rugby star Will Hopoate.

Sharing a message similar to U.S. and U.K. ad campaigns, "You've seen the play, now read the book. The book is always better," the Church has been turning a lot of heads in Australia, including ABC News in Australia.

In a recent article, Margaret Burin from ABC News wrote: "The sell-out stage show The Book of Mormon mocks their faith. But rather than being offended Mormons are viewing it as an invitation to set the record straight. It's difficult not to be intrigued by The Book of Mormon hype."

In addition to sharing Latter-day Saints' testimonies of the real Book of Mormon, the article also set the record straight about some common misconceptions about Mormons and their beliefs, sharing:

Some quick facts about Mormons

They are Christians
Monday nights are reserved for family activities at home
Mormons usually spend between 18 months and two years on an unpaid mission abroad after school
They should abstain from having sex and passionate kissing before marriage
The church has prohibited polygamy since 1890, despite common misconception
Along with alcohol, they do not drink tea or coffee but can drink caffeinated soft drinks
The church opposes same-sex marriage
They door-knock because spreading the word of God is part of their religion
They believe in a Heavenly Mother as well as a Heavenly Father
Jehovah's Witnesses are also Christians who have their own interpretations of the Bible, but Mormons believe in the bible alongside the Book of Mormon, a newer take on Christianity
While they revere Joseph Smith, who published the book of Mormon in 1830, they worship God

Read the rest of this story at abc.net.au