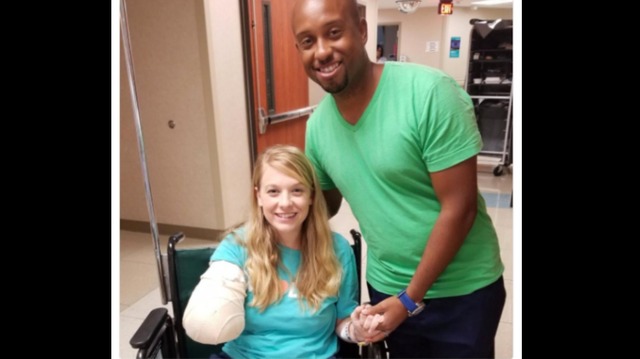 “If you really listen to this story you will realize there really is no other explanation but God," Tiffany Johnson said.

The brutal shark attack that took Tiffany Johnson’s right arm has given her an unshakeable testimony in God. Without His help, she wouldn’t be here today, she told WBTV.

While snorkeling in turquoise-blue waters near Nassau, Bahamas, the 32-year-old mother of three from North Carolina was attempting to be as still as possible so as not to disturb the fish around her, reported Tracking Sharks. Her husband, James Johnson, had been feeling seasick earlier and was resting on a nearby boat.

When the shark grabbed hold of Tiffany Johnson, the pain wasn’t immediate.

“I felt like a tug or bump on my arm,” Tiffany Johnson said in the Tracking Sharks story. “I honestly thought I had bumped into something, that’s what it felt like.”

“He didn’t struggle at first,” she continued. “He was just kind of sitting there with my arm in his mouth, almost as if he was waiting for me to do something. It was very strange.”