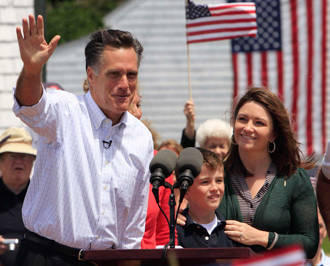 America and the meaning of a Mormon president

When asked how Joe Lieberman's Jewish faith would affect his campaign, a U.S. senator from Louisiana said, "I don't think American voters care where a man goes to church on Sunday."

The senator had forgot that Lieberman, a practicing Jew, worships at a synagogue, not a church, on Saturday, not Sunday. The comment was an example of an ignorance about religious minorities that can sometimes lead to religious bigotry at the polls. Mitt Romney's candidacy may be a sign things are changing.

Many Americans believe Barack Obama's inauguration marked a rejection of racial prejudices in America. Some feel the election of a Mormon president could mark a rejection of religious prejudice, at least of Mormons.

"Obama's election in 2008 and inauguration in 2009 represented the advancement of America in racial dialogue and relationships," said Keith Hamilton, an adjunct law professor at Brigham Young University and BYU's first black law graduate. "If a Latter-day Saint were elected president, it would represent another example of how America has grown up about these issues."