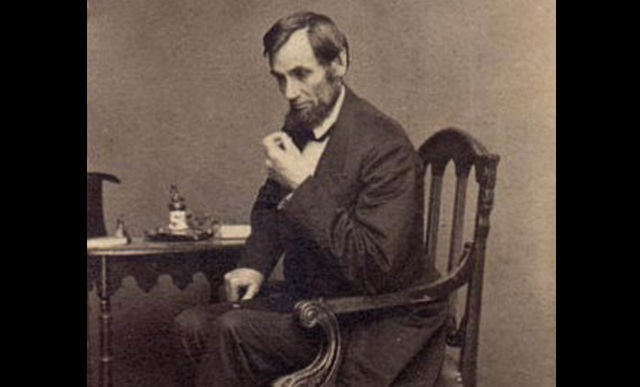 An Apostle's Account of Meeting with President Abraham Lincoln

While the United States was being plunged into the midst of the Civil War, George Q. Cannon of the Quorum of the Twelve Apostles met with President Abraham Lincoln on Friday the 13th in June of 1862, just six months before President Lincoln would issue the Emancipation Proclamation, freeing over 3 million slaves.

Despite this political turmoil and tension, Lincoln spared a considerable amount of time for the latter-day apostle, even swapping a few jokes.

George Q. Cannon recorded this experience in his journals, which have recently been published online by the Church Historian’s Press. (Learn more about this exciting project here.)

"On Friday, 13th went in company with Hon. John M. Bernhisel and Senator Hooper and Elders C. W. West and Brigham Young, Junr, to pay our respects to President Lincoln. The President has a plain, but shrewd and rather pleasant face. He is very tall, probably 6 feet 4 inches high, and is rather awkwardly built, heightened by his want of flesh. He looks much better than I expected he would do from my knowledge of the cares and labors of his position, and is quite humorous, scarcely permitting a visit to pass without uttering some joke. He received us very kindly and without formality. Conversed some little upon Utah affairs and other matters. The number of our population was asked for by him. He did not seem to think that we were as numerous as we stated; but after hearing our evidence on the subject appeared to be satisfied. He was quite non committal respecting our admission, having no wish seemingly to commit himself upon the subject.

"Sunday, June 15th. Copied a long letter for Bro. Hooper addressed to William Clayton. Wrote a letter to Sarah Jane and commenced a letter to the President. The morning was very sultry; but after noon the weather suddenly changed and became quite cool. Saw Mr. S. Daily, Delegate from Nebraska, and had conversation with him."

While in Washington D.C., Elder Cannon met with many other important political leaders and even watched an impeachment trial for Judge West H. Humphreys in the Senate, which he also recorded in his journals. (Read more about these events here.)

No doubt these documents give incredible insight into the early days of the Church and the political realities the Saints experienced.

“The George Q. Cannon journals are among the most important sources of Latter-day Saint history during the latter half of the 19th century,” says Richard E. Turley Jr., assistant Church historian and recorder.

"Next to Brigham Young, George Q. Cannon was arguably the best-known Latter-day Saint during the late 19th century," Carolyn Call writes on LDS Church News. Living in the western United States during an exciting period of expansion, growth, and industrial revolutions, Cannon explains a pivotal part of our Church History and describes important events, such as his mission to Hawaii, meeting with President Lincoln and other political leaders, and the day the Manifesto ending plural marriage was presented at conference. (Learn more about this incredible apostle here.)