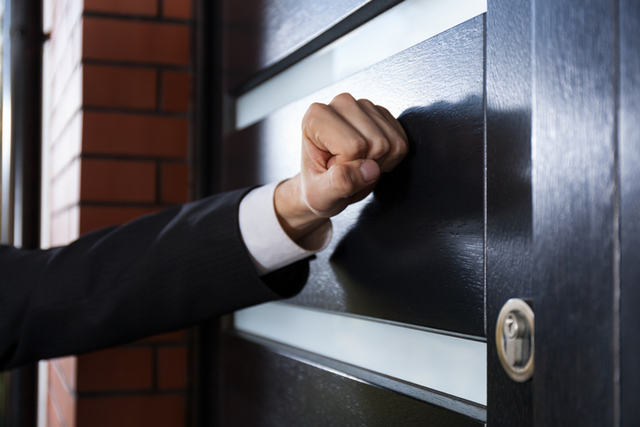 An Atheist Asks the Internet How to Make Missionaries Go Away Without Being Rude: Amazing Answers from Latter-day Saints

On a forum posted on the Atheist Republic, one woman asked a simple question: "How do you make missionaries go away without being rude?"

While the forum generated much discussion, most of the responses didn't provide practical advice. So we decided to turn to our readers, many of whom have served as missionaries or personally know missionaries serving, to ask the same question.

Here is just a sampling of the great advice we received in a discussion that generated nearly 200 comments.

Editor's note: Some of the following responses have been edited for length and clarity.

Cathy Ambrose: My friend would just take them golfing. He lived on a golf course. He said, “I’m not interested in religion, but I sure do love to golf.”

Julie JoVonna Livingston: This is actually a fabulous question and can be considered for any kind of missionary. Honestly, just be kind, offer a bottle of water if you can. You never know how long they've walked around. And, believe it or not, missionaries are thrilled to offer service. So, even if you're uninterested, don't be afraid to ask for help in times of need. Even if it is as simple as pulling weeds in the garden after you've hurt your back.

Shaylee Taylor: I actually appreciated when people told me as a missionary that they weren't interested. It saved us so much time and a lot of annoyance from them if we knocked on their door a couple times a week because we were under the impression that they wanted to learn more. Just say, "Thank you for what you are doing, but I'm not interested." I even appreciated when they took a card with our contact information to give to a friend or family member that might be interested.

Dale Goodwin: How about thank them for their service and tell them that while you respect what they are doing, you don't believe the way they do and ask that they respect your beliefs the same way you respect their's.

Berenice Huerta-Beruben: As a former missionary, the best would be nice and sincere. It is great to offer a friendship despite the difference of beliefs. Simply say honestly and kindly that "I am not interested on religious topics but despite that, I offer my friendship." Something like that. On my mission we had several friends not interested on our message, but they were always kind to us.

Sharon Fox: Be politely direct. The missionaries change every few months so you may have to repeat yourself but only because they may be new missionaries, not because they aren't listening.

Aubrey Wilkins Wursten: I think it was very nice that somebody cared enough not to be rude, so we should make sure we respond in kind and take hints.

Matt Pacheco: Give them snacks and tell them to enjoy their bike ride

Rylie Michelle Bullock: Politely say you're really not interested, and please make a note to leave this house alone. . . . If you tell us now is not a good time, we'll come back again. And again. And again. Because maybe later will be a good time. If you just flat out tell us no, we'll spend our time somewhere else. No hurt feelings whatsoever.

Kiana Derakhti: Just tell them you're not interested. But maybe offer them food or water to be nice. They knock doors all day long!

Courtney Hahne Groneman: Missionaries get so much rejection that they won't blink an eye if you are rude. They will however, show right back up on your doorstep if you don't make yourself clear.

Mitch Featherstone: Have a short, open-ended conversation. Give them two or three sentences to see if they can catch your attention. If not, say, “Thanks for your time, boys. I wish you both the best of luck in your journey. I think I’m good with where I’m at.” I would much rather have faced that on my mission than someone saying “no thanks” and then slamming the door on me.

Dallin L. Porter: As a former missionary, it's pretty hard to do anything that offends us.

While not advice perse, here are some other humorous or interesting responses this question generated:

David Johnson: Easy way to get rid of them is to just get baptized.

Gregg Burcham: I had a mentor who when she found out I was a member, immediately told me how she handles the missionaries. She would see them through the window and grab a copy of her AA book and tell them, “I’ll read yours, if you’ll read mine.”

Susan Heumphreus: Well, I just told them I couldn't talk now and to come back another day. They actually left me a little card with an appt for next week. I was determined to be gone that day!! Then I thought of my dad, who was a stickler for integrity. I stayed home. I kept the appointment. I was less than polite as they entered and introduced themselves as "representatives of the Lord Jesus Christ." Then I let them come back the next week. The third time they came, I was taught a biblical truth I hadn't known before. From then on, I was an eager and willing "investigator."

Joe Brian: Say you’re already a member and then send them to the neighbor you don’t like.

Laura Davies: "No, thank you" makes our missionaries leave. Other churches' missionaries . . . well, in my experience, trying to give them a Book of Mormon makes them leave real quick! I figure if they're gonna try and convert me, I should return the favor!