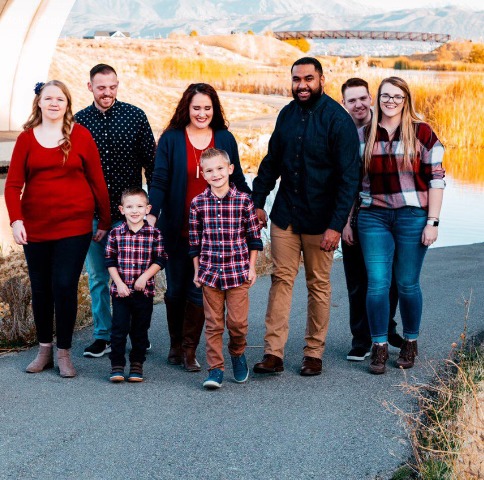 Instant Family of 8: How God Answered the Prayers of a Foster Child and Childless Couple

All Brittany wanted was someone to fight for her and her five siblings.

All childless couple Alo and Ashley Moli wanted was a big family.

Along the way, the soon-to-be-family of eight discovered that not only did God have a plan for them but that His timing was nothing short of perfect.

“I was just praying that He would hear my cries and He would listen.”

Brittany lived with her biological parents for the first 16 years of her life. She was the caregiver for her five siblings—Michael, Nick, Brianna, J.T., and Ty—from the time she was 12 years old. The teen struggled to feel any sort of connection to her verbally abusive biological parents. 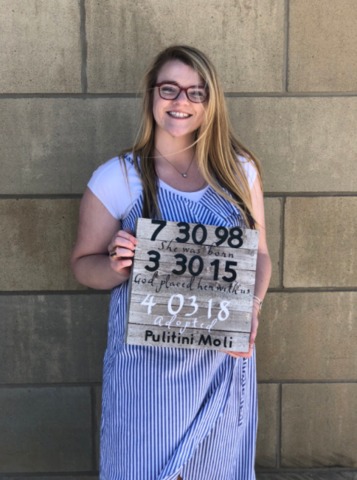 “I always felt like I wasn’t really loved by them,” Brittany said in an LDS Living podcast. “It was rough to talk to them. I always kept my distance, but I always wanted to be approved by them, so I always tried so hard in school to impress them and get good grades, but it just never was enough.”

The situation with the children and their biological parents continued to deteriorate. In March 2013, Brittany and her five siblings found themselves in foster care. The children went to live at the Christmas Box house in Salt Lake City, Utah.

It was here that Brittany decided to turn to God with her problems. Although the children were members of The Church of Jesus Christ of Latter-day Saints, Brittany said they didn’t ever attend church nor did they do anything even remotely gospel-related.

“I decided to turn to God to see if He was real, because I had my doubts,” she said. “I remember praying non-stop . . . reading some Ensign [magazines,] writing in my journals, trying to gain that light in my life. I was just praying that me and my siblings would stay together, that Heavenly Father would guide us to a loving family. I was just praying that He would hear my cries and He would listen.”

Little did Brittany know her cries for a family weren’t the only prayers being offered up.

“Sometimes you wonder if He is even listening.”

At the same time the children were placed in foster care, Alo and Ashley Moli were enduring a harrowing trial of their own. Married the year before, both envisioned having a big family. Their dream was soon overshadowed, however, by multiple hospital visits and the news that they may never have the opportunity to have children of their own. 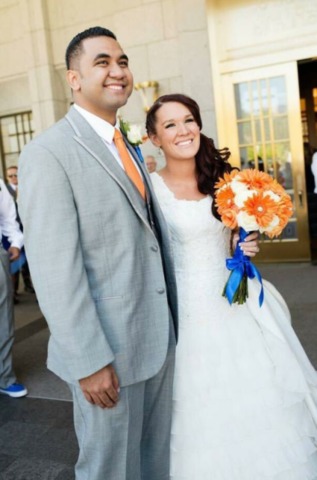 “My heart pleaded to God and asked Him that if it were in the cards, to just bless us with one child,” Alo wrote on Twitter. “There were nights where I felt completely hopeless. . . . I would hear my wife cry herself to sleep thinking that this was somehow her fault. No matter what I said, she would always apologize: ‘Alo, I’m so sorry I can’t have kids. I’m sorry that I can’t give you what we wanted. I’m just sorry for everything.’ There was nothing I could do or say to convince this wonderful woman that this wasn’t her fault.”

Alo felt helpless, not knowing what he could do to ease the indescribable pain of infertility he and Ashley were enduring.

►You’ll also like: 5 Ways to Find Hope Despite Infertility (+ Ways to Support Those Experiencing Infertility)

“Just saying ‘everything would be okay’ wasn’t enough,” said Alo in the LDS Living podcast. “Do I give another blessing? Do we pay more tithing? Do we give more generous offerings? During that time our faith was shaken a little bit. No, actually it was shaken a lot. You don’t have a plan for something like that, not having children and then seeing if God is hearing your prayers. . . . Sometimes [you] wonder if He is even listening.”

Never in a million years did I think that this beautiful woman who I had vowed to protect and take care, would ever look as if life had defeated her. I felt that the prayers I had poured out above were left unanswered and left my faith wavering. pic.twitter.com/smmuqfkH9V— Alo Moli (@holy_moli88) July 11, 2018

Despite their questions, Alo and Ashley pressed forward. They had originally discussed adoption as a possibility later down the road after having their own biological children. As the infertility treatments continued to be unsuccessful, Ashley approached Alo with the idea to adopt first by telling him that maybe there were kids out there who needed them “more than ours do right now.”

At first, Alo was against it, but only because he questioned his abilities to be a father immediately. The couple decided to pray about it and attend the temple. They knew adoption was the right decision. 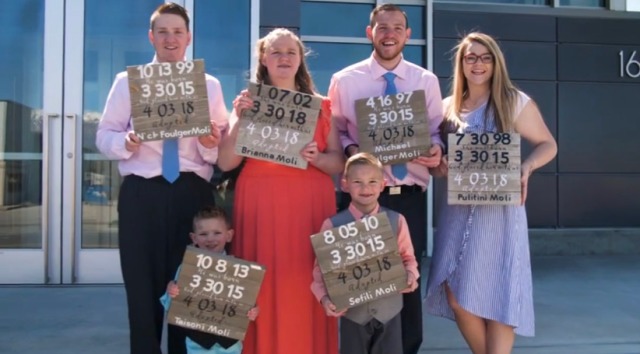 “We either take them all or we don’t take any.”

One week after receiving their answer to adopt, Alo received a call from his brother, who happened to work for a foster placement agency. There were three kids who needed a home.

The Molis soon learned the sibling group of three was actually part of a family of six children, all of whom needed homes.

One of the oldest of 13 children, Ashley was immediately on board to take all six siblings.

“There’s no way that I could be comfortable and not have anxiety having my little brothers and sisters go somewhere where I couldn’t watch them,” said Ashley. “I knew that Brittany was the caregiver and she was the one taking care of the little ones. . . . I said. ‘We either take them all or we don’t take any. I can’t make that decision to split a family up like that.’”

We took in this family of 6 and they looked like they were just as defeated as we were...and we were okay with that. All we we wanted to give them was the love we’ve been yearning to give our unborn children. pic.twitter.com/Y4yCugZGnp— Alo Moli (@holy_moli88) July 11, 2018

For Brittany, it was a direct answer to her pleading with the Lord. “They said, 'We have a potential family that is willing to take all six of you.' That’s how I knew Heavenly Father really was listening and He really was answering our prayers."

Two years after entering foster care, the children moved into the Moli home on March 30, 2015.

The transition was overwhelming at times.

Four of the six children have cognitive disabilities, but Alo and Ashley weren’t told the extent of those special needs. Learning how to handle each child was a process for the new parents.

For the first 10 months, Ashley said if her youngest child was awake, he was screaming. She constantly prayed for help.

“I had to pray to hold on every day or else I wouldn’t have made it," she said. "I had to hold onto my faith.”

As the new parents made adjustments, they made it through each day. 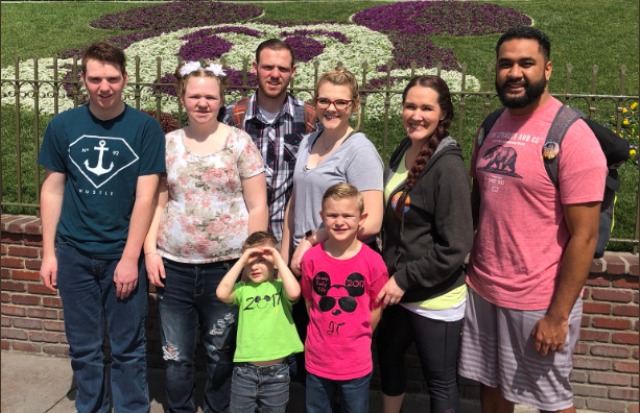 “They showed me I was enough.”

The transition for Brittany wasn’t easy, either—she was used to being the caregiver, but Alo and Ashley wanted her to simply experience being a teenager for the first time.

She also struggled with trying to find the right group of friends. After she made a few mistakes, Brittany was worried Alo and Ashley wouldn’t want her anymore. She worried the couple would give up on her and not want to adopt her. 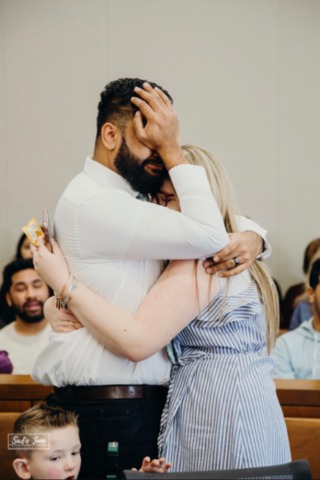 “They were like, ‘We’re here for you; we’re fighting for you. We are not going to give up on you.’ That was the biggest thing for me, [because] I always felt like I was never enough for people to fight for me," said Brittany. "Alo and Ashley definitely showed me that I was enough and they were going to fight for me. They were going to teach me how to be good, how to stand up for myself. They showed me that they were also going to be my cheerleaders throughout the whole way."

Brittany finally had someone willing to fight for her and didn't want it to end. "I just wanted them to be my forever parents.”

►You’ll also like: LDS Couple Who Adopted 6 Foster Siblings Featured on TODAY + How Faith Helped Them Through Infertility

Alo can still remember the day he was called "Dad" for the first time. 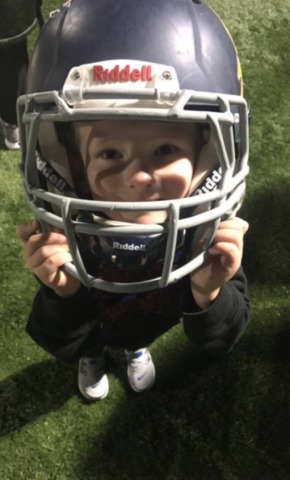 A few months after taking in the children, tempers were riding high one chaotic Sunday morning as the family scrambled to get ready for church.

Alo was getting dressed when he heard one of his kids yell, “Hey Dad, can you help me?”

Alo couldn't believe his ears and ran downstairs to ask his son to repeat what he had said. The child replied, “Oh, I said ‘Hey Dad, can you help me?'”

That simple request for help meant so much to Alo.

“Time stood still that day when I heard my name called ‘Dad,’” he said. “And then Ash was being called 'Mom.' That day was the day I was like, ‘I’m a dad!’ And he recognizes that. I have that title.”

“But He definitely knew.”

More than 100 people came to support the Moli family on April 3, 2018—the day they officially became a family. The six siblings took on Alo's last name and officially became Molis. They even changed their given names by incorporating names from Ashley’s side of the family and Tongan names after Alo's immediate family.

The judge asked each of the children individually if they wanted to be adopted by Ashley and Alo. When it came time for Brittany’s answer, her reply melted hearts around the courtroom. “You know what, Judge, I’ve been waiting for this for three years." 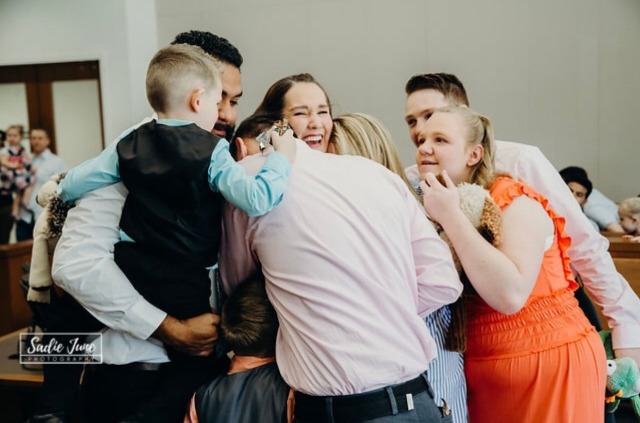 Brittany calls it the happiest day of her life. She said it was a day she will remember for a lifetime, for it was the day she forever became a Moli.

“During this whole process of growing up, being in foster care, God has put me in many trials,” she said. “He tested my patience. He just wanted to make sure that I was going to be prepared. [At first] I just wish that His timing was a little bit better because I was a 16-year-old that got put in foster care and I thought my life was over. . . . Who would want to foster a 16-year-old? But He definitely knew.”

Ashley and Alo admitted that for a long time, they did not like the advice to simply trust in God’s timeline for them. They were frustrated with the Lord, not understanding why they weren’t being blessed despite their years of obedience and faithfulness.

Listen to the Moli family share their family story in the podcast below:

But they began to understand it as they saw God’s plan for their family unfold. 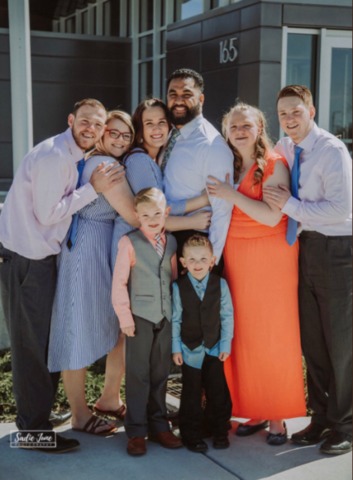 Alo was especially moved when he thinks about the timing of their trials and how intricately involved God really was in their lives.

“Knowing that there was a foster child praying the same time . . . praying for a family that would give her the same love that we wanted to give a child and to know that God, that His hand was in that all the way was extremely humbling. You can’t tell me there isn’t a God that . . . isn’t aware and has it all mapped out for us.”

Brittany summed it up another way.