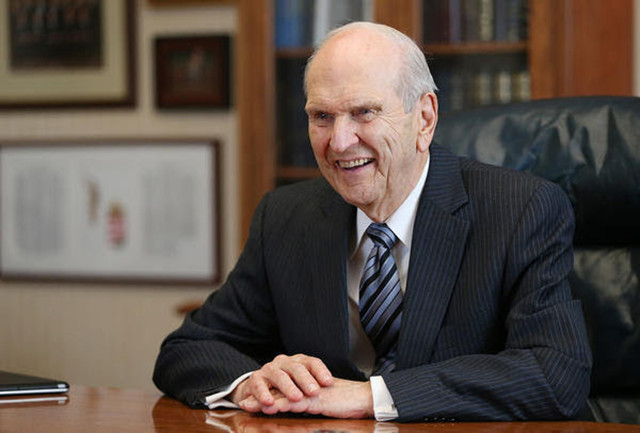 "Last Sunday, 70,081 fans filled Mercedes Benz Stadium in Atlanta, Georgia, for Super Bowl LIII. Fans watched as the New England Patriot’s Tom Brady became the oldest quarterback, at 41 years of age, to win a Super Bowl. This Sunday at State Farm Stadium in Arizona, a capacity crowd that could rival Atlanta, is expected to watch a spry and energetic 94-year-old take the field," an article written by Boyd Matheson for KTAR News begins.

The reason for this highly anticipated turn out? Members of The Church of Jesus Christ of Latter-day Saints, along with friends and community members, are gathering to hear President Russell M. Nelson speak at a devotional that will be broadcast across Arizona.

And this isn't the first time President Nelson has spoken at a sports arena. In September 2018, nearly 50,000 people gathered to hear President Nelson speak at Safeco Field in Seattle, Washington, home to Major League Baseball's Seattle Mariners. Our prophet then made his way to Canada to speak at the Langley Centre, home of the Western Hockey Leagues' Vancouver Giants.

About President Nelson's upcoming devotional, Boyd Matheson notes, "President Nelson won’t be running a 4.4-second 40-yard dash, throwing a deep route or catching a sideline pass on the field Sunday. (Though having watched him bound up steep steps while at almost 14,000 feet above sea-level in Bolivia, I believe he still could give Brady a run for his money.)"

Matheson details President Nelson's break-neck ministry during his first year as our prophet. "He logged an incredible 55,000 flight miles, including stops to five continents, 16 nations and territories, and 24 cities," Matheson writes. "From the determined souls who live in the mountain heights of Bolivia to those in the emotional depths of despair in fire-ravaged parts of Paradise, California; from church faithful in Zimbabwe, Kenya and Israel to those striving for self-reliance and upward mobility in India and Thailand — Russell M. Nelson is racing around the world. He seeks to minister to the church’s 16 million members while also striving to lift and influence countless others, not of his faith, through the church’s vast humanitarian and educational outreach services."

And that doesn't even touch on the monumental changes the Church has made in the past year, from meeting schedules to ministering programs.

The KTAR News article goes on to praise President Nelson for his pioneering work in the medical field, his work with charitable organizations, and his service as a prophet of God.

Anyone who reads the article or has been a member of this worldwide Church over the past year feels and understands President Nelson's advice after his South American tour: "Wait till next year, and then the next year. Eat your vitamin pills. Get some rest. It's going to be exciting."