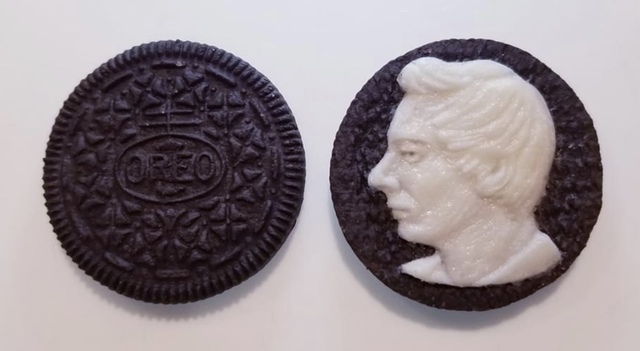 Artist Christopher Creek laughs when asked if his Joseph Smith Oreo art is the first time he’s ever sculpted anything out of Oreo cream.

“When you say Oreo cream, is it really cream? I don’t what that stuff is,” Creek says after confirming that his first “Oreo attempt.”

Creek says of the filling inside an Oreo, “Whatever it is, it sculpts pretty well.”

This unique piece of art began a week or so ago when Creek saw a friend post a photo of a Greek or Roman head on an Oreo and immediately wondered if he could do something like that. He felt pretty confident that he could, so he purchased a package of Oreos and decided to give it a shot. He decided this would be a great opportunity to commemorate the 200th anniversary of the First Vision and set to work.

Two and a half hours later, Joseph Smith’s profile was sculpted on an Oreo cookie.

“I thought a profile would work best,” Creek explains. “It’s basically a little relief sculpture. You don’t have a lot of depth to work with so you’re making a little cameo—a little cameo cookie really.”

It’s obviously difficult for Creek to avoid laughing as he seriously describes the process of working with Oreos. He began by drawing the profile on a piece of tracing paper first to make sure he had the size just right. Then, he faced a challenge many of us know very well of trying to twist the Oreos just right to avoid breaking the cookie but capturing all of the filling on one side of the cookie. “Like, it’s a big technique,” Creek says with a chuckle.

But he ended up scraping all of the cream off the cookies. He wanted Joseph’s face to be clean, and any crumbs would leave a freckled appearance. Instead, he kept only the clean cream and created “a little sculpting pile of cream.” He then applied that on top of his drawing with a toothpick. He used a paintbrush with a little cup of water to keep everything moist and then pushed the cream around with the paintbrush to get a sculpted look.

“One thing that’s nice about this versus clay is if it got a little dirty, I could actually just lick it off,” Creek says.

But Creek, an artist who has previously sculpted the First Vision with clay, becomes serious when asked about what the Prophet Joseph Smith means to him personally.

“He’s the crux of this whole last dispensation, the fulness of times, [he] ushered this whole thing in,” Creek says, adding that even if someone sees his Oreo sculpture for 30 seconds and it catches their eye, it is a small way of sharing his testimony.

“I think that’s all an artist ever really wants is to move somebody with their work, and as strange as it is, this little Oreo, just because of the uniqueness coupled with years of being able to do something with my art, just happened to come together at a good time,” Creek says.

Creek is no stranger to working in tight spaces. On his Instagram account, @tokensoffaith, Creek shares paintings he has completed that are all one inch long or smaller, many of them of Latter-day prophets. For 12 hours, he uses a magnifying glass and breathes slowly in order to capture the image he hopes to create. He believes this is a way he can follow Church leaders’ counsel to do what you can to share the gospel. And whether it is an Oreo and or a one-inch canvas, Creek wants to do his part.

“I’ve been able to share with friends and family and non-believers and bear a brief testimony, and it’s been really good,” Creek says.