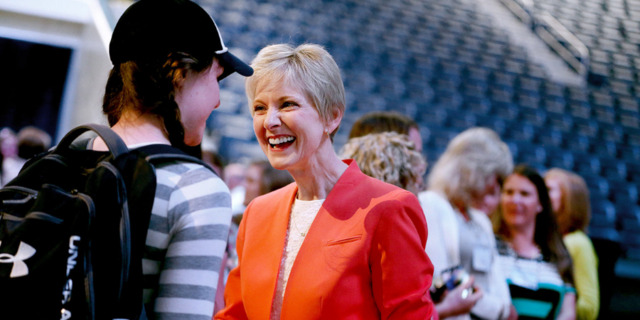 BYU Women’s Conference begins next week. Here are 8 things you need to know

In just a few days, the 45th BYU Women’s Conference will begin. The conference, co-sponsored by Brigham Young University, the Relief Society, and Church News will be available online from April 29–30. With 47 sessions and 59 presenters, the conference is sure to be inspirational and uplifting. Here are 8 things you need to know about the conference.

1. The conference is all digital.

In 2020, BYU Women’s Conference was held in May as a virtual conference with seven sessions. This year, that has expanded to 47 sessions with 59 presenters, all available online.

2. The conference will include both free and paid experiences.

You can view the complimentary sessions in a variety of ways:

Paid sessions will be available through womensconference.byu.edu. A digital registration package costs $59 and includes 35 additional addresses in English.

3. Sessions will also be available in Spanish and Portuguese.

All seven complimentary sessions will be available in English, Spanish, and Portuguese. Additionally, five sessions will originate in Spanish and five will be translated into Spanish. Those sessions are included in the full program on page 30.

4. This is the first time members from all five organization presidencies will speak at BYU Women’s Conference.

5. All sessions will be recorded and can be watched on-demand.

While you’re waiting for BYU Women’s Conference to begin next week, you can watch Sister Sheri Dew’s keynote address on Facebook. Her talk, "Exceeding Great and Precious Promises" (2 Peter 1:3-4) is available for free until April 29, when it will become part of the full digital conference experience.

7. Music will come from around the world.

According to Church News, the digital event will feature music submissions from women worldwide. Additionally, a virtual choir will feature participants from Brazil, Canada, Germany, Japan, Portugal, and the United States. The choir will perform a song in English and Spanish.

On Thursday night at 6:30 p.m. MDT, a special service broadcast will feature pre-recorded messages from Sister Wendy W. Nelson and Sister Mary Ellen Edmunds. The broadcast will celebrate service projects and experiences from BYU Women’s conference throughout the years.

Find more information about this year’s BYU Women’s Conference at womensconference.byu.edu or listen to a recent Church News podcast with conference chair Sister Rosemary Thackeray in the player below.