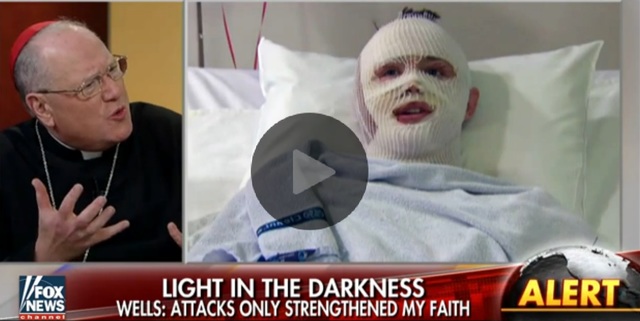 Last Friday, Cardinal Timothy Dolan, who serves as the current Archbishop of New York, appeared on Fox News to share an interesting Easter message—one that praised an LDS missionary.

Cardinal Dolan was asked to share his thoughts on a recent interview with Elder Mason Wells who was injured in the Brussels terrorist attacks along with three other missionaries. Elder Wells shared his gratitude for being alive and then shared this touching testimony:

"Everything I've lived up to this point has fortified my personal faith that God is there," Elder Wells said. "I know that I've felt his love several times. I know that if I can feel his love sitting on a sidewalk next to a destroyed airport, God will talk to his other children, too. I know that he does listen to prayers, and that the prayers the people are (giving) now, they make a difference, because I've felt them."

About this missionary's incredible story and faith, Cardinal Dolan said, "This horrible thing is happening to him, but yet in spite of this evil, in the face of this horror, he is able to profess his faith. What a great example for us when you look at the world today there is so much darkness, there is so much reason to doubt and get cynical, and yet you have a guy like this Mason, who twice, while doing God's work, is almost killed and yet still enthusiastically confesses his faith in the providence of God."

The Cardinal and news reporters go on to discuss how much we need messages like this in our world today. Despite the horrors Elder Wells and the other missionaries have been through, their strong faith in their Savior and desire to do his work is touching the lives of people from all faiths around the world.

As another update and message of hope, check out this new video posted to Facebook of Elder Joseph Empey, Elder Wells' mission companion, walking for the first time.

MISSIONARY UPDATE: Elder Empey is up walking! Elder Empey is one of four missionaries from The Church of Jesus Christ of... Posted by Shara Park on Monday, March 28, 2016