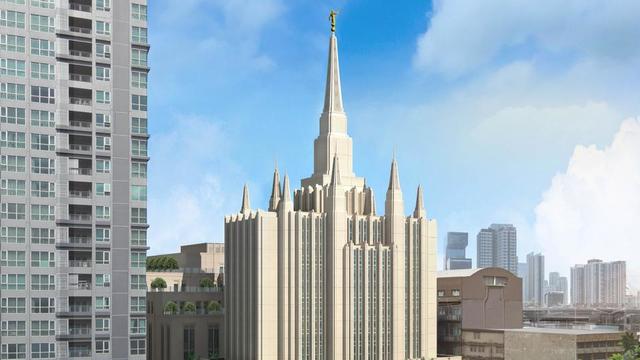 The Church of Jesus Christ of Latter-day Saints is pleased to announce that the official groundbreaking ceremony for the Bangkok Thailand Temple will be held at 10:00 a.m. on Saturday, January 26, 2019. The ceremony will be held at the temple site, which is located at 1645/6 New Phetchburi Road Makkasan, Ratchathewi, Bangkok 10400 Thailand.

Elder David F. Evans, Asia Area president, will preside at the ceremony. Attendance will be by invitation and proceedings will be transmitted via the internet to designated Church meetinghouses within the proposed temple district.

The intent to construct the temple was announced April 5, 2015, by then Church President Thomas S. Monson. Today, there are more than 22,000 Latter-day Saints in Thailand, organized in 42 congregations. This temple will serve Church members in Thailand and other nearby countries.

Temples are different from meetinghouses where Church members and friends meet for Sunday worship services. Temples are considered sacred — a place where holy ordinances are performed, including marriage to unite families for eternity.

After construction of the temple is completed, open house dates will be announced and public tours conducted. A date for dedication will also be announced.

There are currently 201 temples throughout the world either in operation, under construction or announced.

Lead image a rendering of the Bangkok Thailand Temple.