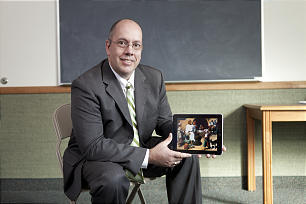 Long after general conference has appeared on television and radio, discussed among members at Church, or even appeared in print in the Ensign and Liahona magazines, Richard Dadzie, a member in Ghana, Africa, will finally have a chance to enjoy conference messages. In his area, there isn't a building with a satellite broadcast receiver, so he depends on the Church to mail DVDs to his stake for viewing four to six weeks after conference.

Many congregations throughout the world face challenges trying to view general conference and other Church broadcasts in a timely manner, so Church technology employees are working on solutions.

Jacob Stark, a Church technology product manager, said, "Fifty-nine Church congregations from Benoni, South Africa, to Jakarta, Indonesia, were invited to evaluate different technologies for viewing Church broadcasts over the Internet. The most popular solution involved the use of a widely available media player."