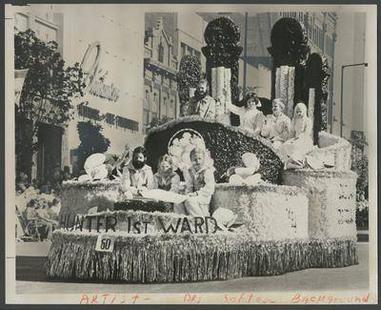 The streets of Salt Lake City are days away from being filled with horses, motorcycles, clowns and — most noticeably — fantastical floats created out of wood, foam and sparkles (among other things) at the annual Days of '47 Parade.

Here's a photographic look at how Days of '47 Parade floats have changed over time, starting with the 1897 parade and working forward:

A float representing Utah County is pulled by horses in the 1897 Pioneer Jubilee celebrating the 50th anniversary of the arrival in the Salt Lake Valley.

The Hunter 1st Ward 1976 float depicted the Tabernacle organ in the background with Brigham Young speaking from the pulpit.

A replica of the University of Desert won the Best Float in Parade Award for the Taylorsville, Utah, 4th Ward in 1982.