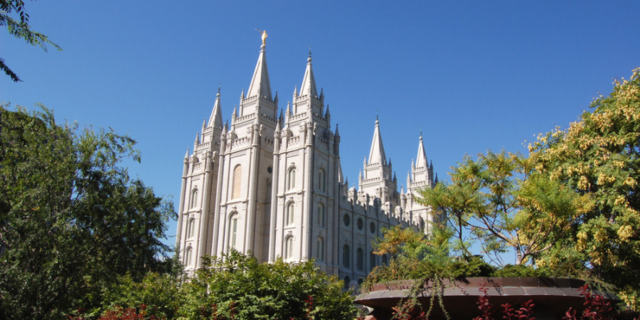 Did Brigham Young leave empty shafts for elevators in the Salt Lake Temple? How to identify assumptions in Church history

“Would you like rock-solid proof that God inspires His prophets in every detail?” The Sunday School teacher had saved his favorite story for the end of class. “The Salt Lake Temple was designed by a prophet. Brigham Young told workers to leave empty shafts in the interior, but nobody knew why. It was only later that engineers discovered the shafts were the perfect size for elevators. The technology of the future was known beforehand. Heaven had prepared the way.”

Two things interest me about this story. First, to paraphrase Luke Skywalker in his later years, it is amazing that everything in the story is wrong—Brigham gave only loose advice on the temple’s design and encouraged others to flesh out the detail, the exterior stone shell was built long before anyone even thought about the interior, and elevators had been invented more than one hundred years before the Saints arrived in the valley. Second, this story illustrates the most common reason that myths and rumors persist among us—people assume they are true without question. It is easy to assume that the people in black-and-white photographs of the 1800s lived primitive lifestyles, but when the Salt Lake Temple interior was finally designed in the late 1880s, the architect included electricity, elevators, and a telephone in the modern, fireproof building.1

Assumptions are things we presuppose or take for granted or assert as true or certain without offering any evidence. Historian Steven C. Harper noted, “Assumptions are not knowledge, but often those who hold them do not discern the difference.”2 Typically, an assumption is the starting place for thinking, an opening premise.

Frequently, so-called challenges with Church history stem from bad assumptions in the present. We assume that other people at Church don’t have problems, that the Book of Mormon peoples spread across the entire western hemisphere, that prophets never get tricked, or that things were simpler in the past. We assume one should never speak of Mother in Heaven or of temple ordinances or of questions that trouble us. Poor assumptions can cause error and harm. In cases like the temple elevators, a person who first feels impressed by this story may later feel betrayed when learning the truth. As we identify and address the assumptions in our thinking, we follow Paul’s counsel to “prove all things; hold fast that which is good” (1 Thes. 5:21). It takes humility to change our assumptions after we learn they are incorrect.

► You may also like: Peanut butter at the pearly gates? What a quote misattributed to Sister Hinckley teaches about Latter-day Saint myths

Present Assumptions Distort the Past

Assumptions can reveal our present perspectives. Consider the case of a man lying in a gutter. One person sees the man and thinks, “There’s a drunken bum.” A second person sees the man and thinks, “There’s a man who needs help.” The facts were the same for each viewer—a man and a gutter—but the assumptions drawn about the situation reflect different viewpoints. The first person assumes that “only drunks are found in gutters,” while the second assumes that “people lying in gutters need help.” The first person likely believes that individuals are responsible for all that happens to them, whereas the second may believe that problems are also caused by events and forces outside of individual control.3

Assumptions often spring from things we deeply value—family, service, truth, fairness. Assumptions are not typically wholly “right” or “wrong,” nor can they be proven. Often, we use assumptions as shortcuts to leap to a solution we already desire. For example, when a large wooden vessel of “mammoth size” and “fine craftsmanship” was discovered in the Chicago River in the late 1990s, some Latter-day Saints assumed (and greatly desired) that it was one of the barges built by the brother of Jared. This conclusion was desirable because it helped prove the truth of the Book of Mormon. The idea spread quickly on the internet and email lists of the time, and the story resurfaces every now and again. However, closer examination revealed the device to be a prototype fuel tanker that was built and tested by the US Navy in 1942.4

Assumptions become embedded in cultures—including our own. For example, in many modern cultures, whiteness is assumed to be the default skin color—one might describe a “Hispanic man” or “Black hair,” but white people and body parts require no adjective. As another example, because the notion of self-reliant individualism is so prominent in Western culture, readers of the Bible (and artists) usually assume that Mary and Joseph traveled to Bethlehem alone. However, based on customs of the era, group travel would have been more likely, especially at a time when everyone was returning to their native cities.5 This assumed virtue of rugged individualism also makes it particularly hard for many American Latter-day Saints to “submit to all things which the Lord seeth fit to inflict” (Mosiah 3:19) or to accept help from others.

Sometimes assumptions arise from artistic representations of history. For example, painters who depict the translation of the Book of Mormon have placed the plates on a table in view of the scribe, despite the fact that the plates were always hidden from the scribe. Some painters include a lamp or candle in the scene to symbolize the light of revelation, even though Joseph normally translated during daylight hours when there was so much light that he had to place the interpreters in a hat in order to see the message on the stones. Filmmakers who set Book of Mormon stories in the jaguar-filled jungles of Latin America lead people to assume where the Book of Mormon events occurred. Paintings of the mortal Jesus as anything other than a Middle Eastern–looking man do not depict reality but cultural assumptions. The image of handcarts—though used by only 5 percent of pioneers—has come to symbolize all pioneer experience. Errors presented visually can solidify into de facto interpretations of the past.

Another common assumption is that there are “lessons of history.” Lessons are drawn out of the past by people living in the present; they are not objects to be found lying on the ground like arrowheads in a field. Lessons are interpretations we make. The Book of Mormon illustrates this process nicely. After the lengthy war chapters in the book of Alma, Mormon observes that “many had become hardened, because of the exceedingly great length of the war; and many were softened because of their afflictions” (Alma 62:41). The same lengthy war prompted participants to draw different lessons.

Real vs. Rumor explores Church history myths, rumors, and false quotes to demonstrate how to think effectively about the information that swirls around us in our day. Each chapter brims with illuminating examples from scripture, history, and popular culture. By thoughtfully combining study and faith, you will be strengthened as you deepen your discipleship, avoid deception, understand tough topics, and see the hand of God in history and in your own life. Available now at DeseretBook.com and at Deseret Book stores.